The couple WordPress and WooCommerce have been for too long the favorite solution to deploy quickly an online shop and start making revenue. Now every developer who encountered WordPress knows its many drawbacks. In this article, we will explain how we overcame WordPress's unreliability by turning it basically into a backend service.

First of all why WordPress is so popular?

Then what's the problem with WordPress?

On a technical side:

How to overcome the unreliability of WordPress?

WordPress, since its version 4.7.0 (released in December 2016), offers a RESTful API that is to say 13 years after its first release in 2003 and only 3 years ago from the time of the writing of this article.

The API allows interactions with WordPress using JSON (JavaScript Object Notation) format only. While for requesting data from it, it does not require authentication if you wish to edit, create, or delete information you will need to authenticate. It is worth noting that WordPress only supports Cookie Authentication natively, but some plugins allow for more types.

The consumption of the API is pretty straight-forward and allows you to retrieve any data pretty easily. The root endpoint is mounted on /wp-json/. From there you will be able to see all the available sub-endpoints.
But let's dig into some examples:

WooCoomerce has been offering a RESTful API to its users for a longer time than WordPress. The first WooCommerce API was released with WooCommerce 2.1.0 in February 2014 which is almost three years before WordPress' REST API.

It is more commonly used. For example, when you set up your logistics with ShipBob they will use the API to retrieve your shop orders automatically.

It is important to note that the original WooCommerce API after several updates has been deprecated and relabeled Legacy API. WooCommerce decided to fully rework their API to extend the WordPress API directly after the release of the latter.

We recommend to use the latest version which is at the time of this article is the WooCommerce API v3 (not the Legacy one but the current one).

When using the API whether the Legacy or the current one, you need to create first an API token in the settings of WooCommerce steps to follow are described here: https://docs.woocommerce.com/document/woocommerce-rest-api/

Then to find out how to use the tokens to authenticate please go here: https://woocommerce.github.io/woocommerce-rest-api-docs/#authentication

Finally here are some examples:

Now that we know how to use WordPress API and WooCommerce API, there are two things we need to consider:

This is why we went with the architecture below: 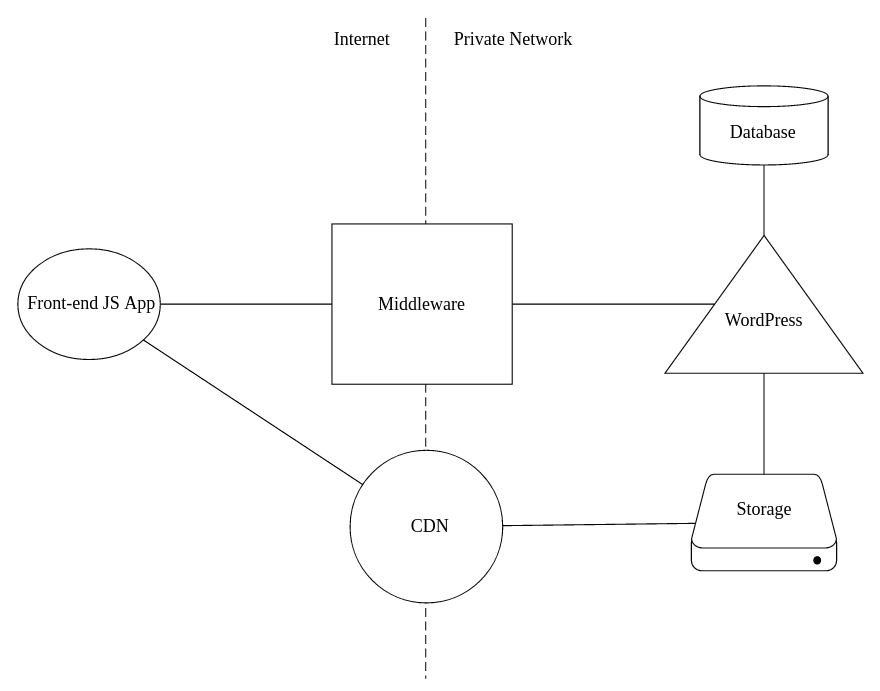 It means that with that architecture when we want:

For the company I work, to be able to fully customize the front-end as we want, while also keeping our website more secure is a major win for us. Admittedly the infrastructure needs are bigger but the maintainability and stability in the long term are higher.

Sonny Alves Dias
Curious game developer. CTO at Pixelmatic
CDN on top of your website to increase your core web vitals
#webdev
How I set up a wiki for "Game of Rôles", the French better "Critical Role"
#docker #wiki #devops #tutorial
The Definitive Checklist Before Releasing A Website
#webdev #tutorial #seo #html

Once suspended, sonny_ad will not be able to comment or publish posts until their suspension is removed.

Once unsuspended, sonny_ad will be able to comment and publish posts again.

Once unpublished, all posts by sonny_ad will become hidden and only accessible to themselves.

If sonny_ad is not suspended, they can still re-publish their posts from their dashboard.

Once unpublished, this post will become invisible to the public and only accessible to Sonny Alves Dias.

Thanks for keeping DEV Community 👩‍💻👨‍💻 safe. Here is what you can do to flag sonny_ad:

Unflagging sonny_ad will restore default visibility to their posts.