In JavaScript and many other programming languages, variables are references to a value. By the Transitive Law of Logic and Mathematics, it then follows that references and values are one and the same. On the surface, this is true to some extent. Unfortunately, it isn't as simple as that under the hood.

Data types in JavaScript are classified as either primitive or non-primitive.

NOTE: Symbols are also primitive data types, but the rules are sketchy for them. I will not expound on them in this article for the sake of simplicity.

In the Context of Primitive Data Types

The variables dev and went both have the same value. However, dev and went are not necessarily the same references. Although they both store the value 'to', they do not store the same instance of 'to'. They occupy two different places in memory. dev stores a different string in memory while went stores another string in memory. The two variables just happen to store strings that have the same value. The diagram below illustrates this. The arrows represent what values each variable is referencing/pointing to. 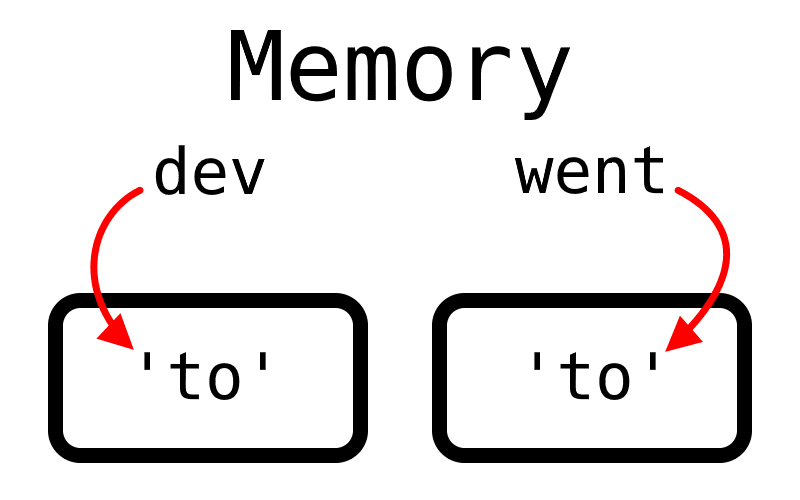 Now, you may be wondering how to achieve two variables having the same reference and same value. To do that, we simply assign the reference to another variable.

In this case, the dev and went both have the same value and the same reference. The diagram below is updated to reflect what has changed under the hood by doing this. 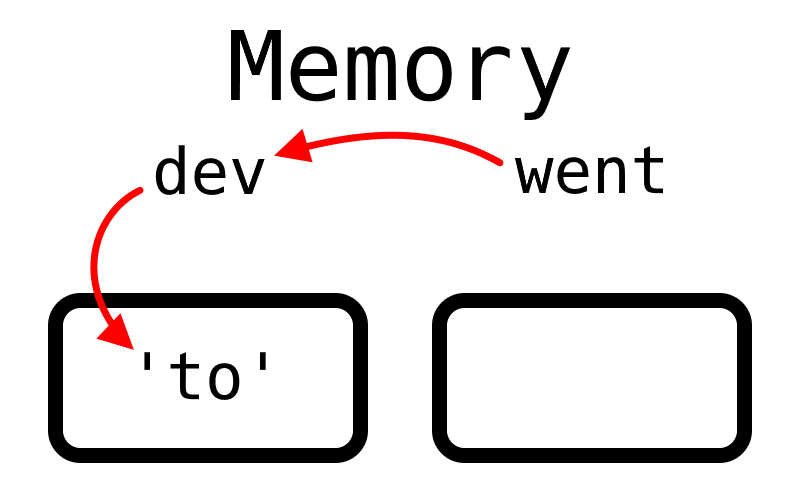 The diagram shows that running the code now takes up less memory because both dev and went now point to the same string. There is no longer a need to store two separate instances of the same string in memory. In a larger scale, this can prove to be useful in memory optimization. Compared to the previous example, memory usage has essentially been cut to half.

In the Context of Objects and Arrays

The concept of pointers and references is further amplified by non-primitive data types. Consider the code below.

As we learned in the previous section, two variables may store the same value but not necessarily point to the same place in memory. We can prove this by altering their properties.

Now, what happens if we make the two variables point to the same object?

Indeed, the two variables have the same references and the same values. As a consequence of this, mutating the properties of one variable also mutates the other.

This behavior also applies to arrays. Instead of properties, we are altering the individual elements of the array.

We are now going to assign moreDogs a reference to someDogs.

In most cases, we do not have to be concerned about their differences. But in cases where it is absolutely necessary to care about performance and memory optimization (such as server maintenance), it pays to keep these differences in mind. For instance, one can write an implementation of a function by making sure that it returns references rather than brand new instances of the same value.

The "document.getElement API" is a great example of such an implementation. Let's take the document.getElementById method for example. Given a unique id, the method returns a reference to the HTML element that has that unique id.

So if there comes a time where you need to point out their differences, use this valuable article as a basic reference.