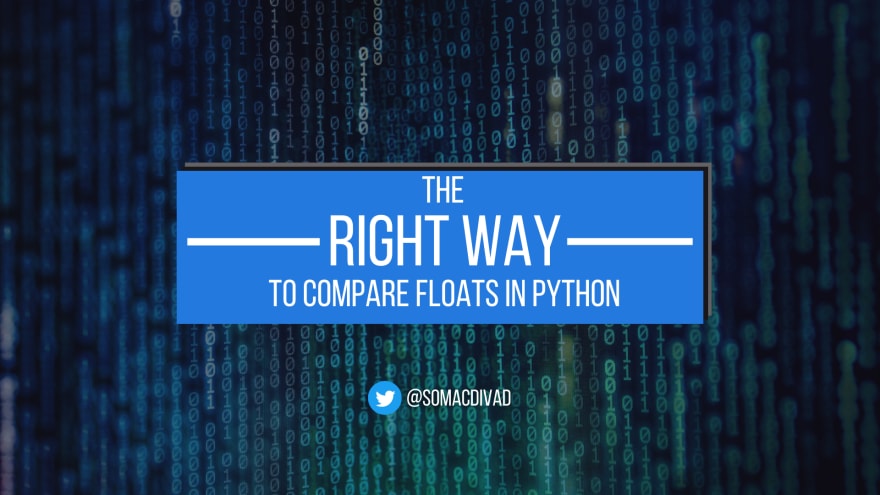 Floating-point numbers are a fast and efficient way to store and work with numbers, but they come with a range of pitfalls that have surely stumped many fledgling programmers — perhaps some experienced programmers, too! The classic example demonstrating the pitfalls of floats goes like this:

Seeing this for the first time can be disorienting. But don't throw your computer in the trash bin. This behavior is correct!

This article will show you why floating-point errors like the one above are common, why they make sense, and what you can do to deal with them in Python.

Prefer videos? Here’s the video version of this article:

Your Computer is a Liar (Sort Of)

You've seen that 0.1 + 0.2 is not equal to 0.3 but the madness doesn't stop there. Here are some more confounding examples:

The issue isn't restricted to equality comparisons, either:

So what's going on? Is your computer lying to you? It sure looks like it, but there's more going on beneath the surface.

The resulting binary number may not accurately represent the original base 10 number. 0.1 is one example. The binary representation is 0.000110011…. That is, 0.1 is an infinitely repeating decimal when written in base 2. The same thing happens when you write the fraction ⅓ as a decimal in base 10. You end up with the infinitely repeating decimal 0.333….

Computer memory is finite, so the infinitely repeating binary fraction representation of 0.1 gets rounded to a finite fraction. The value of this number depends on your computer's architecture (32-bit vs. 64-bit). One way to see the floating-point value that gets stored for 0.1 is to use the .as_integer_ratio() method for floats to get the numerator and denominator of the floating-point representation:

Now use format() to show the fraction accurate to 55 decimal places:

So 0.1 gets rounded to a number slightly larger than its true value.

🐍 Learn more about number methods like .as_integer_ratio() in my article 3 Things You Might Not Know About Numbers in Python.

This error, known as floating-point representation error , happens way more often than you might realize.

There are three reasons that a number gets rounded when represented as a floating-point number:

These two situations create an infinite set of numbers that can't be exactly represented as a floating-point number. But unless you're a chemist dealing with tiny numbers, or a physicist dealing with astronomically large numbers, you're unlikely to run into these problems.

What about non-terminating rational numbers, like 0.1 in base 2? This is where you'll encounter most of your floating-point woes, and thanks to the math that determines whether or not a fraction terminates, you'll brush up against representation error more often than you think.

You can now understand the original example in this article. 0.1, 0.2, and 0.3 all get rounded when converted to floating-point numbers:

❗Floating-point representation error is something every programmer in every language needs to be aware of and know how to handle. It's not specific to Python. You can see the result of printing 0.1 + 0.2 in many different languages over at Erik Wiffin's aptly named website 0.30000000000000004.com.

How To Compare Floats in Python

So, how do you deal with floating-point representation errors when comparing floats in Python? The trick is to avoid checking for equality. Never use ==, >=, or <= with floats. Use the math.isclose() function instead:

If abs(a - b) is smaller than some percentage of the larger of a or b, then a is considered sufficiently close to b to be "equal" to b. This percentage is called the relative tolerance. You can specify it with the rel_tol keyword argument of math.isclose() which defaults to 1e-9. In other words, if abs(a - b) is less than 0.00000001 * max(abs(a), abs(b)), then a and b are considered "close" to each other. This guarantees that a and b are equal to about nine decimal places.

You can change the relative tolerance if you need to:

There's a problem if one of a or b is zero and rel_tol is less than one, however. In that case, no matter how close the nonzero value is to zero, the relative tolerance guarantees that the check for closeness will always fail. In this case, using an absolute tolerance works as a fallback:

math.isclose() will do this check for you automatically. The abs_tol keyword argument determines the absolute tolerance. However, abs_tol defaults to 0.0So you'll need to set this manually if you need to check how close a value is to zero.

All in all, math.isclose() returns the result of the following comparison, which combines the relative and absolute tests into a single expression:

math.isclose() was introduced in PEP 485 and has been available since Python 3.5.

When Should You Use math.isclose()?

You also need to be careful with >= and <= comparisons. Handle the equality separately using math.isclose() and then check the strict comparison:

Various alternatives to math.isclose() exist. If you use NumPy, you can leverage numpy.allclose() and numpy.isclose():

math.isclose() is especially useful for unit tests, although there are some alternatives. Python's built-in unittest module has a unittest.TestCase.assertAlmostEqual() method. However, that method only uses an absolute difference test. It's also an assertion, meaning that failures raise an AssertionError, making it unsuitable for comparisons in your business logic.

If the first two arguments passed to pytest.approx() are array-like, meaning they're a Python iterable like a list or a tuple, or even a NumPy array, then pytest.approx() behaves like numpy.allclose() and returns whether or not the two arrays are equal within the tolerances:

pytest.approx() will even work with dictionary values:

Floating-point numbers are great for working with numbers whenever absolute precision isn't needed. They are fast and memory efficient. But if you do need precision, then there are some alternatives to floats that you should consider.

Floating-Point Alternatives That Are Precise

There are two built-in numeric types in Python that offer full precision for situations where floats are inadequate: Decimal and Fraction.

The Decimaltype can store decimal values exactly with as much precision as you need. By default, Decimal preserves 28 significant figures, but you can change this to whatever you need to suit the specific problem you're solving:

You can read more about the Decimal type in the Python docs.

Both Fraction and Decimal offer numerous benefits over standard floating-point values. However, these benefits come at a price: reduced speed and higher memory consumption. If you don't need absolute precision, you're better off sticking with floats. But for things like financial and mission-critical applications, the tradeoffs incurred by Fraction and Decimal may be worthwhile.

Floating-point values are both a blessing and a curse. They offer fast arithmetic operations and efficient memory use at the cost of inaccurate representation. In this article, you learned:

Want to take your Python skills to the next level? I offer private one-on-one coaching for Python programming and technical writing. Click here to learn more.

David Amos
Constantly curious coder | Trying to take it to the next level | Docs @RelationalAI | Co-host of Talk Julia
The Truth About Algorithms and Data Structures
#programming #computerscience #learning
Why Can't You Reverse A String With a Flag Emoji?
#python #programming #tutorial

Once suspended, somacdivad will not be able to comment or publish posts until their suspension is removed.

Once unsuspended, somacdivad will be able to comment and publish posts again.

Once unpublished, all posts by somacdivad will become hidden and only accessible to themselves.

If somacdivad is not suspended, they can still re-publish their posts from their dashboard.

Once unpublished, this post will become invisible to the public and only accessible to David Amos.

Thanks for keeping DEV Community 👩‍💻👨‍💻 safe. Here is what you can do to flag somacdivad:

Unflagging somacdivad will restore default visibility to their posts.