Picking between Android Vs iOS is one of the significant questions when it comes to mobile app development. We can't deny the fact that mobile applications have become a necessary part of our lives.

If we look at the statistics, the number of mobile users worldwide has reached 6.95 billion in 2020 as per the latest development stat. That's why many startups are planning to start a mobile app centred business.

Everyone knows about iPhone OS and Android OS phones, both operating systems are popular among millennials and have their own style.

They are fairly common with each other, but there are some important differences you want to consider when you want to decide between the two biggies. In this article, I am going to discuss some of the pros and cons of iOS vs Android and their key differences. 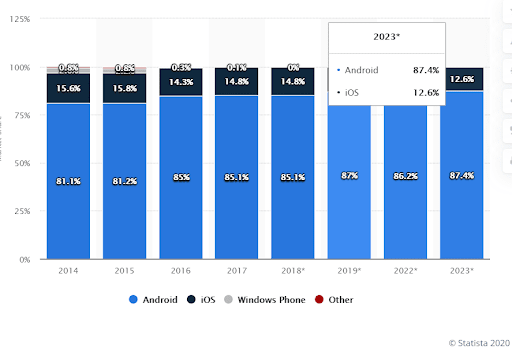 As per the research by Statista, Android's market share will increase to 84.4% by the year 2023. Here we can see that the Android app has a much higher market share than iOS app.

With the huge number of Android devices being ten times larger than Apple devices, the number of users is more inclined towards Android than iOS app development by default.

And this difference in market share makes Android a better alternative to iOS. Thus, you can hire android app developers in India and develop the app of your choice.

Android vs iOS: Which OS is Better? 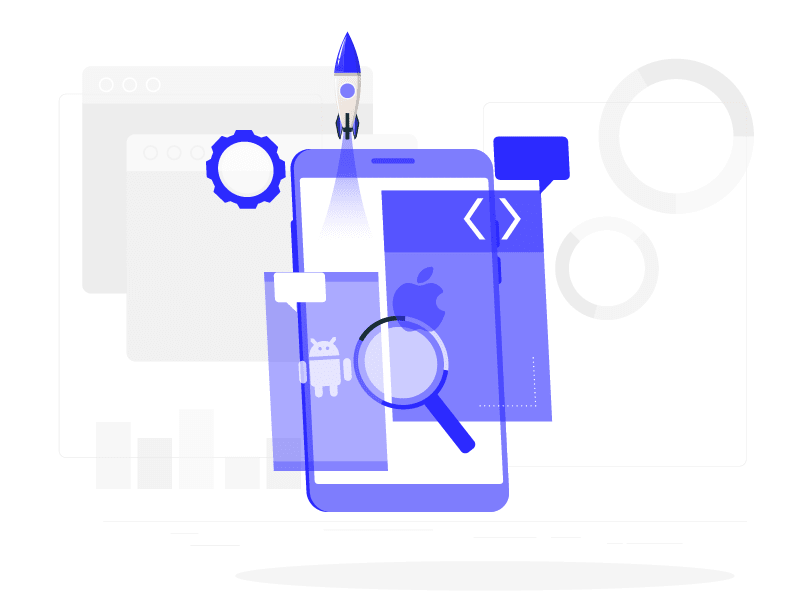 Android vs. iOS is one of the ongoing debates in the software development industry. The answer on which mobile OS is better is in no way yes or no type. There are many factors to consider when making a choice. Let's take a look at them:

Android has a larger and ubiquitous user demographic than the iOS platform. iOS users are mostly located in developed and prosperous countries of the world.

Therefore, a vast difference exists between the two platforms when we consider the purchasing power of users, who use high-end devices, connectivity, spending on apps, and most importantly, apps for a wide variety of needs.

Some of the most revenue-earning countries, such as the United States or Australia, fall under iOS dominance. So if your audience is from western countries, then you have to hire iOS developers.

It can be a problem for software developers, who have to build the same application for different versions of the OS of the same platform.

There are hundreds of devices that use Android that make device fragmentation worse for Android. While there are a limited number of devices supporting iOS in comparison, those who follow strict guidelines to interact with each other.

Apple has total control over its software and devices by designing its own hardware and software. iPhone development is cheaper due to art resizing and testing costs investment.

The development time is almost the same for the iOS platformand the Android platform. But, in Android, due to fragmentation of mobile devices, it takes longer to develop the same application for different versions of the OS.

In contrast, in the iOS platform, the hardware and software are fully controlled by Apple so that there is no issue of Fragmentation. As a result, Android development costs more than iOS development.

A mobile app monetization strategy is essential for you to adopt one or more revenue models. Thanks to Google as Android's mentor and the open-source nature of the platform, Android apps are available as more freemium than paid apps.

Whereas, Apple is a proprietary platform, and its natural tendency is to support paid apps to earn more from investment. Therefore, iOS apps are overpaid, and freemium apps encourage low-in-app purchase features to sell paid apps in the end.

#5 Ease of Design and Development 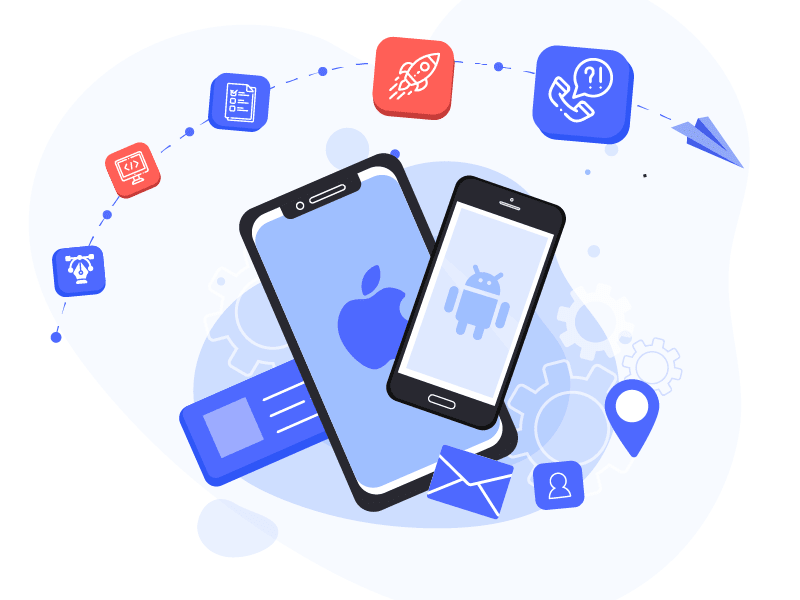 Which is the better option - Android or iOS - the answer is different on both Android and iOS front. Google gives more guidance and documentation for content design as a result Android comes out on top.

While the iOS design is less clearly defined and typically involves the use of negative space, large images, and transitions.

Design and development is a factor that depends less on the platform and more on the skills of your partnership app development company.

When you connect with a brand that specializes in the development of both Apple and Android apps, it does not matter which platform requires less developmental effort as both are done with the same struggles.

Why to go for Android App Development?

There are various factors available when it comes to Android app development, as it has much to offer for startups. Some of the advantages that make android application development a preferable choice among startups are given below:

An open-source platform: The SDKs and development tools for Android are FREE; thus, it lowers the development cost.

Easy publicity of your app: The best part is that with android app development startups enjoy the freedom to publish and share apps on third-party stores. Also, they can share on platforms besides Google Play this can give Android a competitive edge in comparison to iOS platform.

Fast apps approvals: One of the best advantages of android app development is the quicker rate of app approval in comparison to iOS apps. iOS has laid down strict principles that are quite hard to abide at times.

Why is iOS App Development Better?

If you want to get into the target demographic of the App Store, you should hire iOS app developer in India and put your startup's first mobile app on iOS. Here are some of perks and benefits of using iOS for your startup:

Several devices: iOS only empowers Apple devices. Because of this, your app should fit a limited number of screens and devices.

UI design: iOS provides developers with a detailed style guide for the UI of the application. The team requires less time, making it more affordable in the app design phase.

Other than these, there are various reasons, such as:

I hope by now you know which platform would be best to begin with. Well, it depends. If you're targeting a global audience, then Android may be the best for you. But if you are an eCommerce company, then iOS may be a better option.

Keeping all the above points in mind, you can contact a mobile app development company in India to help you build your app without worrying about the operating system.

I'd like to help prepare your Android or iOS interview

How to Build a Food Delivery App in Flutter?

Android 12 Notification Changes: What to Expect

sneha-321
Sneha das is a senior technical consultant and a persuasive writer with 8+ years of rich experience in development.
11 Most Popular Apps to Check Out in 2021
#ios #mobile #android
5 Best Smart Reasons to Build a Mobile App for Your Business
#mobile #android
Winners! 20 Truly Fascinating Mobile Apps of 2020 Revealed
#android #reactnative #flutter #ios