Note: This was published on my personal blog as well

Terrastack enables you to keep using Terraform as engine, while defining your resources in actual programming languages such as Typescript, Python, Java or C# - with more to come (perhaps Ruby?).

This is made possible by the Cloud Development Kit (CDK) and jsii for generating the polyglot libraries. While the major use-case for the CDK is generating Cloudformation configuration as YAML, it's capable of generating pretty much any configuration.

The actual idea of going forward with Terrastack was inspired by yet another project which leverages the CDK / jsii combo to generate Kubernetes configuration: cdk8s. When I saw that project, I eventually realized that the CDK could be useful for more scenarios than just generating Cloudformation YAML.

A first quick prototype was up and running in roughly two evenings. While not all types were properly generated, it was able to generate a simple but working Terraform configuration. 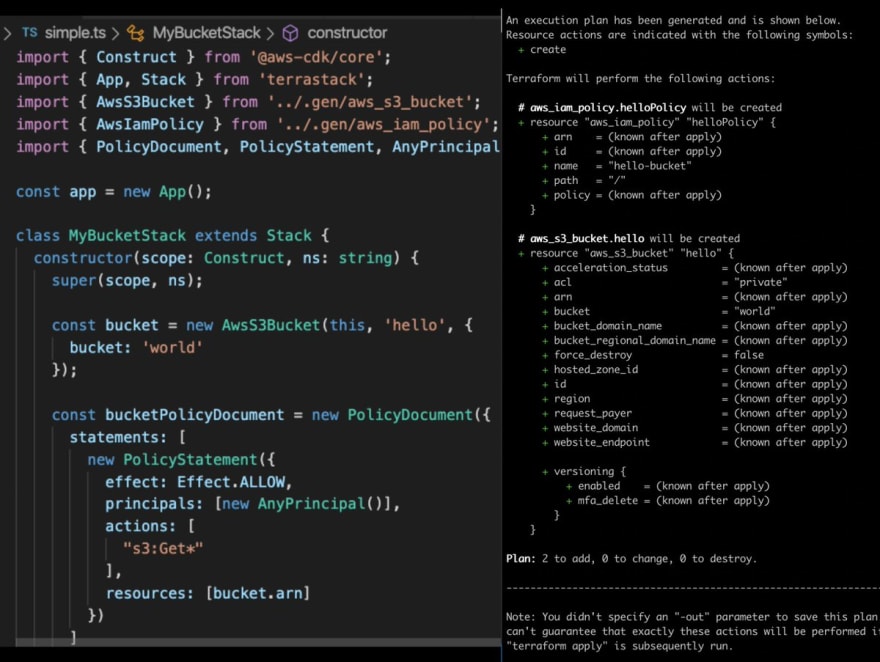 Got inspired by cdk8s to apply cdk goodness to another area: Terraform. I whipped together a quick prototype, and it works surprisingly well 😀 - Will publish the code and likely a blog post. #awscdk #cdk #aws #terraform

The general workflow is:

When looking at these steps, that's pretty much what the CDK team does for Cloudformation. Since Terraform and Cloudformation are both declarative, it's conceptually pretty close. This makes Terraform a perfect contender for getting "CDKified".

Similar to the CDK, that's how a simple Terrastack looks like right now

Finishing up an on premise -> AWS migration utilising Terraform, here are the pain points we've hit on a regular basis over the last two years:

Terrastack tackles all of the above by leveraging existing technologies:

The engine of Terraform and its providers are quite good overall. From my point of view, most of the issues are stemming from the rather static and declarative nature of Terraform.

With Terrastack we can start to treat "raw" Terraform configuration as an "assembly" artifact which we can generate in a predictable way. This enables us to tackle most of the pain points above:

I'm still thinking about the refactoring part. My current conclusion is, that there are mainly two things are getting in the way of proper refactorings:

I strongly believe, that we can come up with a better concept in Terrastack. But that's for another blog post.

From the initial very rough prototype, it took about a week to release a bit more polished prototype on Github.

Let me introduce you to Terrastack: Polyglot Terraform supercharged by the CDK 🚀

Please check it out and give it a try. I would love to get feedback!

This is the first post of a series regarding Terrastack. In the next post, I'll dive a bit deeper into the internals of the CDK itself and what I've learned about its mechanics so far.

Haven't signed up yet? 🤯

With advice, there always seems to be someone who has either been offended or swears that you're wrong. Let's change it.