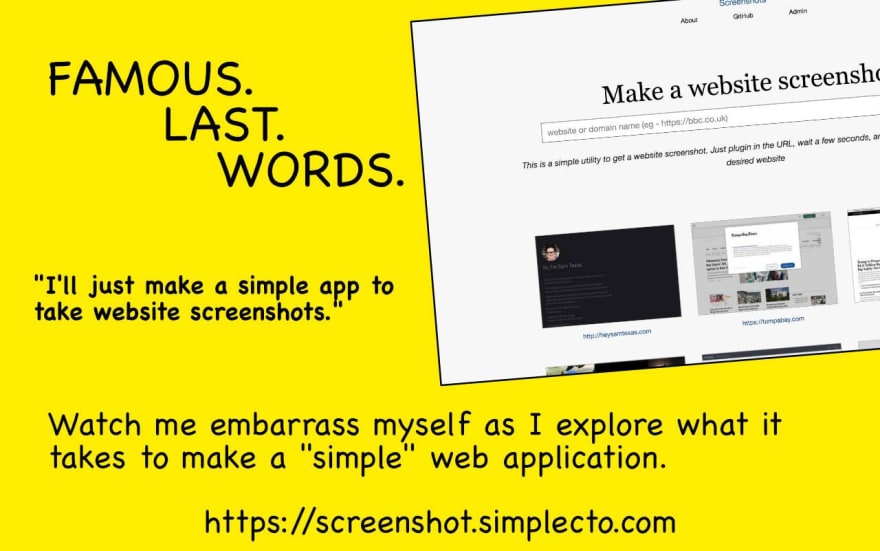 tldr; There are no shortage of API or services for getting website screenshots. However, this is a good experiment to explore what it takes to make high-fidelity screenshots. Let me be clear--this is largely a "solved problem" as demonstrated by multiple companies in the space (see appendix). There are even some open-source projects solving pieces of it at a time.

This distraction satisfies a years-long curiosity I have had about making website screenshots in an automated way.

tldr part2; Show me the code!

Ok, you pushy bastards. The whole Django project is here:

Some thoughts and guiding principles of this project

Below is the current system architecture used. 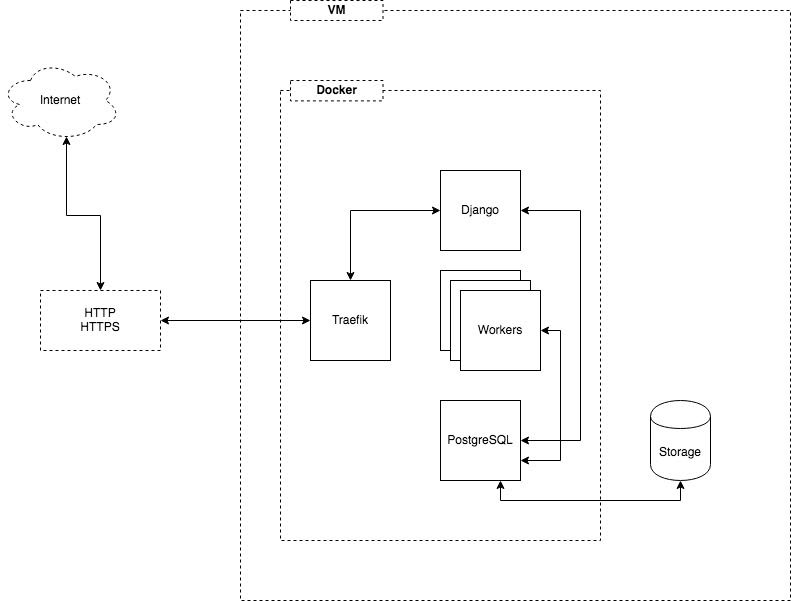 In case you missed it, most of my projects (personal and professional) follow a similar pattern of system and application architecture: linked here

Scale is not an issue

I always preface this with "scale is not an issue" when starting new projects. You have no customers, no users--nothing! So, it makes sense that we should not distract ourselves with the complexity of distributed systems, remote storages, or other things.

Should we need them we can revisit this conversation.

Everything you see lives on a single system all running in plain old Docker. I use a docker-compose.yml file to keep deployment simple.

Learn more about my setup for reverse proxy configuration with LetsEncrypt and Traefik.

If you can Docker and Django then you can Screenshot

That may already sound technically heavy, but it is nothing compared to the massive stacks of AWS Lambda, DynamoDB, Cloud Front, S3, and Cloud Formation whatever just to take pictures of web pages. My goal is to spin up a dev environment in a few minutes without any need for third-party apis.

My reasononing is that what was true in 2010 is not necessarily true in 2020. Compute, bandwidth, and storage are far cheaper and plentiful. For example, 1TB of data today is not that much from a capacity perspective. However, that is potentially 10 million images at 100Kb each. (Screenshots, yo).

Developer time is far more expensive than CPU, Bandwidth, or Storage. Why then do we let, or even encourage developers, to spend so much time on optimizations when it is more efficient to buy a bigger server?

See? I was not kidding. This list is current as of February 2020.

Hands-on CTO laying groundwork for his teams to Move Fast, grow, and have some fun along the way. Sharing is caring :-)

How to manage secrets and configs using dotenv in Node.js and Docker

Sam Texas
Hands-on CTO laying groundwork for his teams to Move Fast, grow, and have some fun along the way. Sharing is caring :-)
Let's Go Shopping on Github, or 5 Tips to Pick the Right Software
#code #bestpractices #protip #wisdom
Use Traefik 2 with Nginx, Apache, or CaddyServer to Serve Static Files
#code #nginx #traefik #caddyserver
3 Things to Do Before DDoS'ing Yourself with a CDN/Application Gateway
#ddos #traefik #docker #code