With ES2016 came two new methods to declare variable i.e. let and const. Before that the developers had access to only var(I feel bad for them, no kidding).

So, what's the catch here? Why are there three different ways to declare variables? Wasn't JavaScript already confusing enough and now they're making it more confusing.

Before we can understand how var and let/const differ we need to understand a computer science-y concept called scope.

JavaScript comes with two kinds of scope i.e Function scope and block scope. Let's have a look at the difference in both of them.

Variables are function-scoped when using var because their visibility is restricted to the function. You'll get an error if you try to utilise it outside of the function.

Notice the visibility of foo isn’t limited by the if-statement block. However, both bar and baz are limited in visibility to the block of code.

This concept of scope is the most prominent distinction between the old-fashioned var and modern let/const. 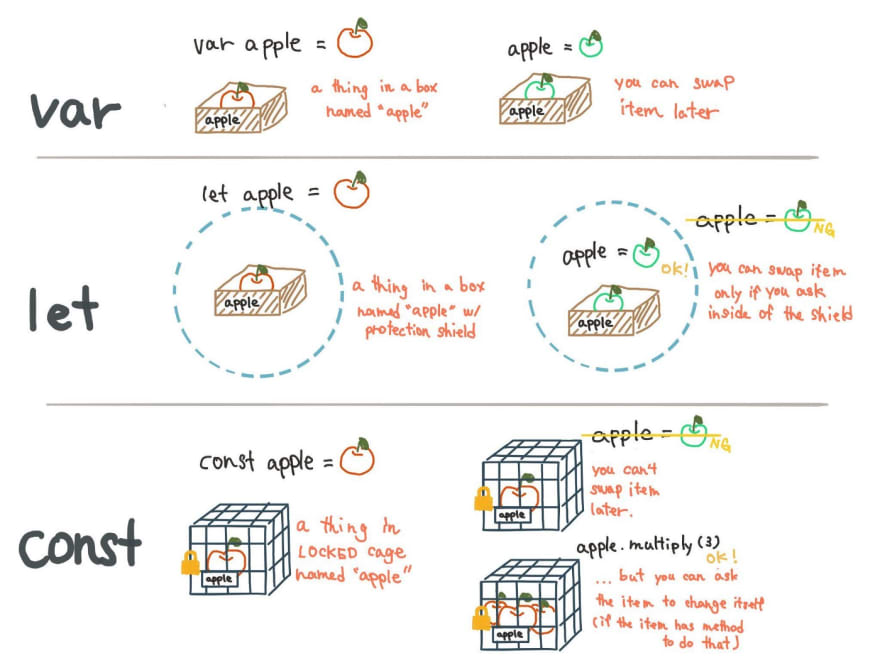 Let's have a look at the following code snippet

According to you what will be the output of the following program??
If you said

then you're absolutely correct.

The variable i is accessible outside of the for-loop. This is expected since variables defined with var have a function scope rather than a block scope i.e they're accessible within the whole function in which they are defined in.

If it's so cool then what's the problem with using var? Why aren't we using it?

I'll use the example below to explain:

So, since times > 3 returns true, greeter is redefined to "say Hello instead". While this is not a problem if you knowingly want greeter to be redefined, it becomes a problem when you do not realise that a variable greeter has already been defined before.

If you have used greeter in other parts of your code, you might be surprised at the output you might get. This will likely cause a lot of bugs in your code. This is why let and const are necessary.

In layman terms, var can be redefined and it's values can also be changed?

So Shubhra, what can we do to save ourselves from making such blunder in production code???

Well, worry not, the people in the JavaScript headquaters knew that you would be having this problem and already gave a solution for this.

Here comes let to save the day.

In many ways let is like a cousin of var. It has a lot of similarities but differentiates in ways that makes ES2016 a more modern-feeling language.

Let us take the same example we took in var

This time what do you think the output is going to be?? Well if you said

then you're in luck.

Hey Shubhra, if let is a cousin of var then why is it coming undefined?
Let me tell you, so let is blocked scope instead of being function scoped.

let can be updated but not re-declared.

this will return an error:

However, if the same variable is defined in different scopes, there will be no error:

Why is there no error? This is because both instances are treated as different variables since they have different scopes.

This fact makes let a better choice than var. When using let, you don't have to bother if you have used a name for a variable before as a variable exists only within its scope.

Also, since a variable cannot be declared more than once within a scope, then the problem discussed earlier that occurs with var does not happen.

The keyword const is an abbreviation for constant. Similar to let, it’s block-scoped, however, you can’t reassign it.

What do you think is the output of this code?

Because the const is not transferred in this scenario, items can still be added to a const variable that links to an array or an object.
This is a topic for another blog. I will discuss it later.

Because function-scope isn't as evident as block-scope, it's best to avoid using var. The objective of ES2016-2019 appears to be to replace var with let/const because they encourage better code habits.

If you need to construct a variable, you should usually use const. Use let instead if you know or suspect you'll need to reassign it (for-loops, switch statements, algorithm swapping).

Shubhra Agarwal
Started as tech enthusiast, later developed keen interest in programming. I have always been interested in learning new technical things, solving problems.
The only Media Queries Cheatsheet you'll need
#css #beginners #javascript #programming
Keyboard shortcuts which will make sure you don't have to touch your mouse while writing code
#vscode #javascript #webdev #beginners
NPM packages for custom hooks that you wouldn't wanna miss out on
#react #javascript #hooks

Once suspended, shubhracodes will not be able to comment or publish posts until their suspension is removed.

Once unsuspended, shubhracodes will be able to comment and publish posts again.

Once unpublished, all posts by shubhracodes will become hidden and only accessible to themselves.

If shubhracodes is not suspended, they can still re-publish their posts from their dashboard.