Since the work needs to write React for several years, and because the work needs to write Vue in recent months, I have a certain degree of understanding and some understanding of these two frameworks. This article will start from the framework users (ie front-end developers, and next From the perspective of the same), briefly talk about modern front-end frameworks and the similarities and differences between React and Vue, without involving the analysis of source code and the underlying implementation.

First look at what React and Vue are. In short, both of them are JavaScript frameworks for building UI, generally used to develop web applications, of course, they can also be used to develop mobile apps and desktop applications (not discussed in this article). When it comes to JavaScript frameworks, we have to mention jQuery, the god-like framework. Let's make a comparison first. In order to facilitate the distinction, we introduce a concept and call frameworks such as React, Vue, and Angular modern front-end frameworks, and jQuery and other similar frameworks as jQuery-style frameworks. Taking a simple Count component as an example, the number will be +1 every time the button is clicked. The jQuery code is as follows:

The React code is as follows:

Vue code is similar to React, with no duplication.

Although the above code is simple, it completely contains the three main elements of a web application: DOM, state, and events. The biggest difference between jQuery and React is the state and DOM. In jQuery, the application state (ie count) is stored in the DOM, and in React, it is a JavaScript variable; when the state is updated, jQuery needs to manually update the DOM, while React only needs to update the state, The framework automatically syncs state to the DOM.

Obviously, the biggest difference between modern front-end frameworks and jQuery-style frameworks is declarative versus imperative. In modern front-end frameworks, we can map the state to the DOM by declarative writing, and the framework will automatically synchronize the state to the DOM. For display pages or simple web applications, the two methods are not very different for our development and code maintenance, but now that more and more content is carried on the front end, and web applications are becoming more and more complex, the imperative writing method is not. It can meet our needs too much, the code written is difficult to maintain, and the declarative writing method allows us to focus on business logic without caring about DOM updates.

Modern front-end frameworks like React and Vue are actually doing the same thing: solving the problem of synchronizing the state with the UI. It's a nightmare to imagine dealing with DOM updates while dealing with complex business logic.

As mentioned above, the three main elements of a web application are DOM, state, and events. Since React does the DOM part of the work, for users, the main concern is the state part, and the API provided by the framework is mainly status-related. In order to better manage and update the state, there are three more important principles in the React ecosystem: one-way data flow, single data source, and immutable data structures.

The data flow refers to the flow of the state. In React, the data flow is relatively simple and clear, that is, the DOM is generated according to the state, and then the event function is triggered by the event bound on the DOM to update the state. All processes are one-way: 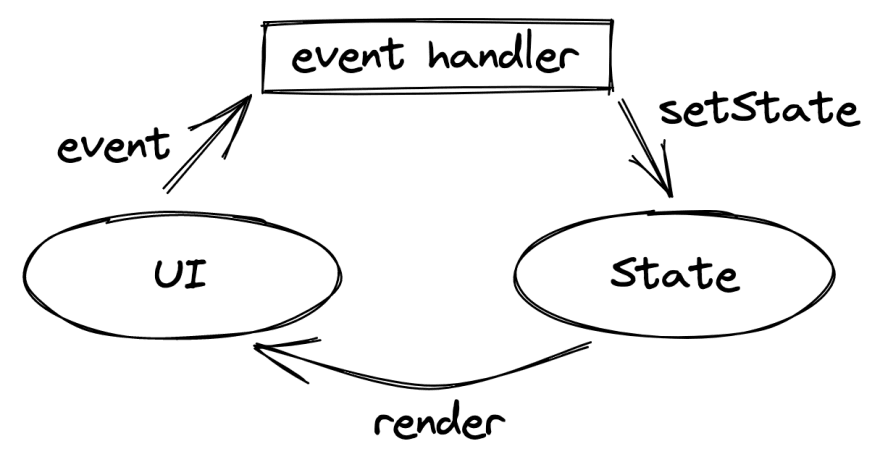 This principle comes from Redux, that is, the global state in the entire application is only stored in one store, which is convenient for debugging and maintenance. In fact, it can also be extended, and it is also applicable to pure React components, that is, only one copy of any state is saved (except in special cases), and the state that can be calculated from other states is not saved separately.

To give two examples, one is that component A has a subcomponent B, and A passes its state to B through props. In component B, unless it is a special case, do not copy the prop and save it in its own state, but directly Use the prop value, otherwise, it may cause the state to be out of sync. Second, when displaying a Todo List, there is a function to display only the unfinished Todos. In this case, do not save a copy of the entire list and the unfinished list, but calculate the Filter out incomplete lists in all lists.

The advantage of doing this is that it is easy to track state changes, making the code clearer and easier to maintain; the second is that because a new state object is generated for each update, it can avoid the problem of JavaScript object references, and thus avoid all kinds of weirdness. bug.

Similarities and differences between Vue and React

When writing React, you will feel that the above three principles are nothing special, and everything should be like this! It wasn't until I wrote Vue that I noticed some differences, although React and Vue essentially do the same thing. Look at them one by one below.

As mentioned earlier, React is a one-way data flow. When writing a form, you need to bind values to, and manually listen for events to update the state:

In Vue it is much simpler:

Since Vue provides this API, we can omit the step of writing events, which can save a lot of time and code when there are many forms. However, it is essentially a syntactic sugar. You can also manually bind values and listen for events like React. For some special scenarios or when you need to do some other processing while updating form values, manual writing is still necessary.v-modelv-model

Whether it's React or Vue, a single source of truth is an important principle. However, Vue provides an API that can greatly facilitate our development. Take the Todo List as an example. The filtering of the completed list can be handed over to, and Vue will cache it to reduce unnecessary calculations and improve performance. .computedcomputed

Unlike React's immutable data, the state in Vue is mutable data, which may be the biggest difference between React and Vue. React updates the state through setState, Vue directly modifies the state, and then he listens for changes in the state in the content. Vue's approach has several benefits:

From a personal point of view, I don't think the above benefits are pain points and optional, but the problems they bring are big troubles:

React, Vue, and Svelte: The fight of the champions. 🏆️

Once suspended, shivashish will not be able to comment or publish posts until their suspension is removed.

Once unsuspended, shivashish will be able to comment and publish posts again.

Once unpublished, all posts by shivashish will become hidden and only accessible to themselves.

If shivashish is not suspended, they can still re-publish their posts from their dashboard.

Once unpublished, this post will become invisible to the public and only accessible to Shivashish Yadav.

Thanks for keeping DEV Community safe. Here is what you can do to flag shivashish:

Unflagging shivashish will restore default visibility to their posts.