If you have been into programming for a while then you must have come across functions. So there might be a little possibility that you would be very well aware about functions. But i would like to share the knowledge that I have of Functions. So here it goes hear me out-

Well if you ask me about functions then I would say that functions is one of my favorite topics in programming because they not only help us in writing clean, and efficient
code but also because Functions are a piece of code that enable us to call that block of code anywhere in the program thus refraining to not write that block of code again in the same program.
If you did not understand what functions are then you just need to have some patience and keep reading.

Declaration of functions in JavaScript

The above code gives output

Functions with argument
The functions in which we pass on some value that would be accepted by some parameter that is present in function declaration. See below for better context

Difference between Arguments and Parameters
Argument - These are the values that we pass while calling the function and these act as the actual value that the variable would contain that we have declared while declaring or defining the functions. 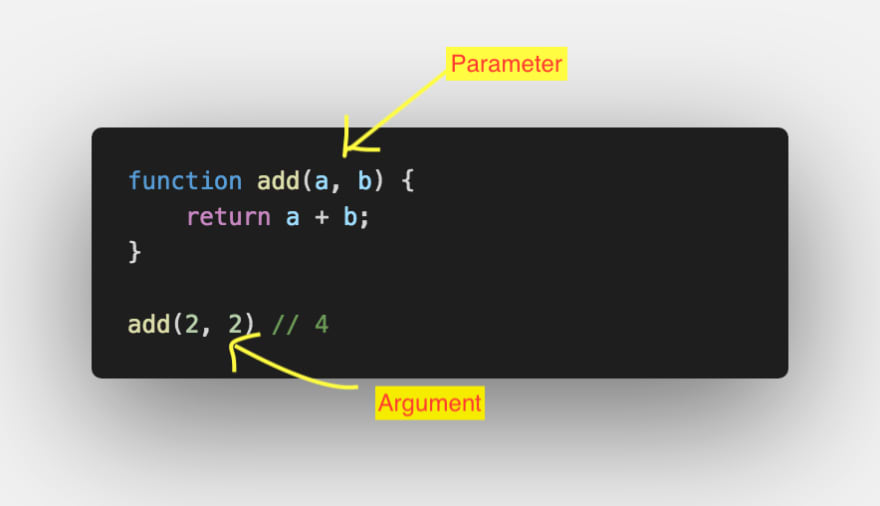 Output of above code would be

In case of string argument.

Methods in JavaScript
Methods are same as functions in Javascript except that these are the type of function that are already defined and we can access those functions simply by calling them and passing the relevant argument if it is required to pass.
For instance refer the following example
array.push() is a predefined method/function which accepts an integer argument.

Above code will produce the following output

Then it would lead to following result

And that simply implies that while dealing with multiple arguments order matters.

This will give following output

Another example of variables that can not be used outside functions.

Now that would produce the exact same error like before because variables like 'let' and 'const' are block scoped hence can not be used outside except its own function.

And the result of that is

if we declare our variables with var keyword, we can access that variable outside of that block because var is a globally scoped keyword while let and const are block scoped keywords.

Which would give output as

The output of above expression would be

The output of above expression would be

FIRST CLASS FUNCTIONS
The ability to use functions as values, pass functions as arguments & return function as a value are known as first class
functions.

now how would you call this function in the following way

that would print out to be 8!

Arrow functions with no arguments

OUTPUT:
This function says me to only print

Arrow functions implicit return
if you have a single statement inside arrow functions that needs to be evaluated like printing or a simple calculation then u can do that in the following way:

now above statement is the same as you just wrote the one with curly braces!

And that gives us the output

CONCLUSION
Okay so that was a lot to grasp. But no worries you can go through this article whenever you feel like referring. If you have come this far then Congrats 🎉 you just learned some really important topics in JavaScript.
I'm so proud of you and wish you nothing but the best in your life as you keep learning and growing.

Thanks for reading and hope you have great day! :)
You can connect with me on Twitter

10 Things I'd Tell My Younger Self About Programming