You came here to ask, "how do I install Docker?" The answer can be straightforward if you're willing to accept my way, but the steps differ based on which operating system is utilized. To make things more complicated, there are a few ways to install Docker on your OS that are largely based on preference. Today I'm going to walk you through my preferred method. This isn't the only way, but I've found it to be the best way to get up and running with ease. For Ubuntu, we'll be setting up the Docker Engine. For Windows and macOS, we'll be using Docker Desktop.

For Ubuntu, we're going to install Docker Engine and Docker Compose using the Docker and Compose repositories. This also happens to be the recommended approach by Docker.

Delete any prior versions if you had installed them.

Update your system and install the necessary dependencies.

Set up the stable repository.

That's quite a few steps, but if you followed along exactly, you should be ready to install Docker!

Install the latest version of Docker, along with its dependencies.

Verify your install by running your first image.

Add your user as an admin to the Docker user group.

Doing this last step means you no longer have to append sudo to run Docker commands!

Fed up with Docker on your Ubuntu box? Uninstall and remove the configuration files with the following commands.

You must have completed the installation of Docker Engine in the steps above before you can install Docker Compose. Assuming you've done so without any errors, let's continue on!

To remove Docker Compose, utilize the following command (assuming you installed with curl as we did above).

Depending on which chipset you have on your Mac, you'll need to install one of two versions of the Docker Desktop application. As this is a GUI application, there's not much needed other than navigating to the correct site and installing the .dmg file. Just drag and drop the Docker icon into your Applications directory.

Docker for macOS with Intel

The official link for installing Docker Desktop for macOS with an Intel chipset can be found here.

We'll also need to take a few prior steps to get Docker Desktop running with Apple Silicon. Namely, you'll need to install Rosetta 2 with the following command.

Afterward, install Docker Desktop for macOS with an Apple Silicon chipset from here.

Within the Docker Desktop toolbar item, navigate to the menu > Troubleshoot > Uninstall. 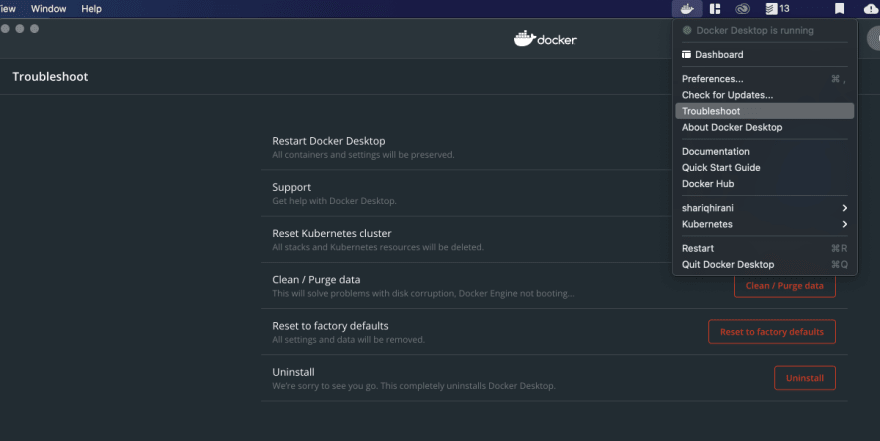 Note that Docker Desktop comes pre-equipped with Docker Engine, Docker Compose, Kubernetes, and a few other goodies. Firstly, you will need Docker Desktop even if you want Docker to only run on WSL. This is due to the sandboxed nature of WSL.

First, you'll need to ensure that virtualization is enabled for your CPU in the BIOS. This differs amongst motherboard manufacturers and chipsets (namely Intel and AMD). A quick Google search will get you going though.

The executable for Docker Desktop for Windows can be found here. It can also be found on Docker Hub. Click the installer, follow the prompts and wait for it to be downloaded. 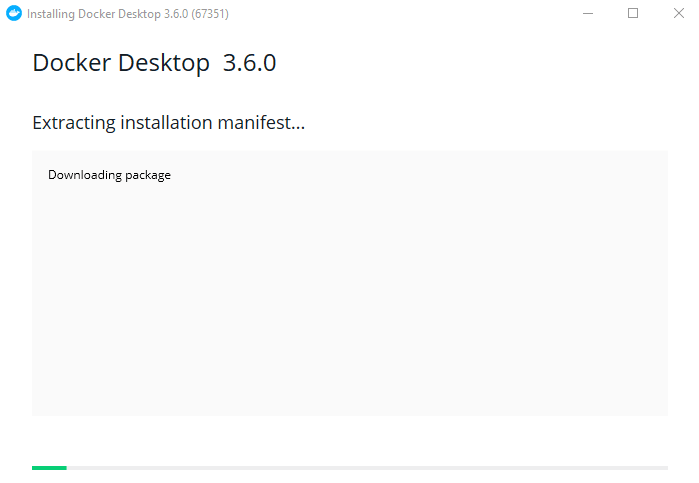 During the process, be sure to allow the prompts for Enable Hyper-V Windows Features and the Install required Windows components for WSL 2.

You'll need to complete the steps for installing Docker Desktop on Windows before you can utilize WSL2. However, once you've completed it, feel free to come back to this section.

Enable Use the WSL2 based engine in the Docker Desktop for Windows settings and Apply & Restart. 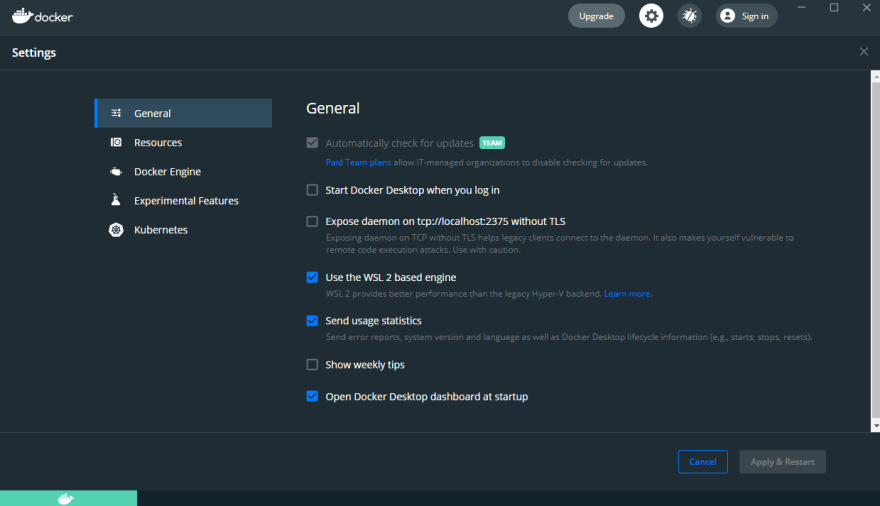 Be sure that WSL2 is set as your default and current distribution. Check the current WSL mode.

If not set to v2, upgrade your existing Linux.

Set v2 as the default version.

Navigate to WSL Integration and make sure Enable Integration with my default WSL distro is checked. 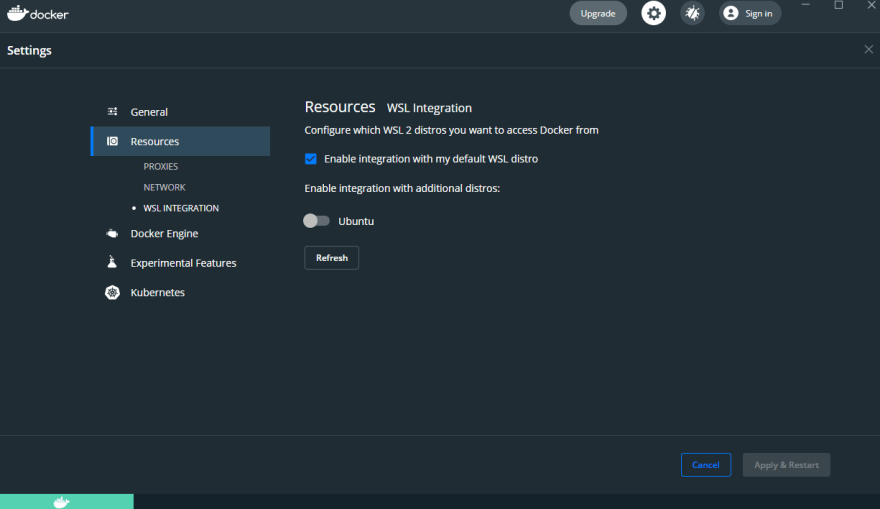 Docker Desktop can be uninstalled from the Apps & features system settings. Just search for Docker Desktop and select Uninstall. Follow the prompts. 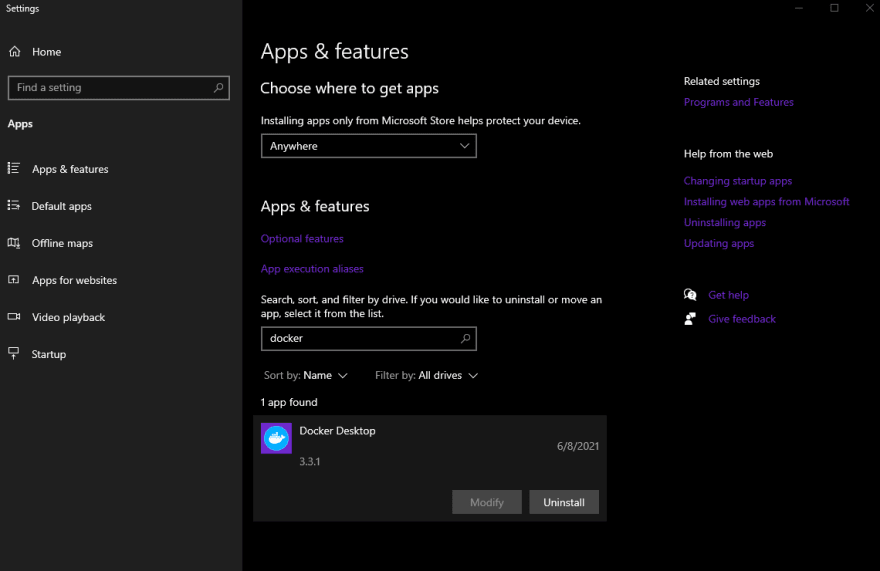 Be sure to check out the official documentation for Docker Engine and Docker Desktop and if you have more questions, feel free to send a message!

In case you mess up the bash files

Creating Own PHP Helpers in a Laravel Project