I don't work for Elastic (yet😄), but I'm a big fan of their products. In fact:

Elastic APM in particular is one of my favourite pieces of software.

One thing I love about the Elastic APM agents, especially for Node.js, is how easy setup is. All you need to do is:

and your application is automatically instrumented.

If you aren't familiar with instrumentation, think of it as watching, measuring, and recording. When you instrument an operation, you watch for when it starts and ends, and you measure and record interesting data about it.

For instance, if we instrument an API call, we would likely want to measure how long the call took. We'd also want to record the URL, the response code, the HTTP headers returned, and so on. By recording these information about actions in our app, we can have enough useful data to debug problems, recognise patterns, and much more.

So what do you get when you instrument an application with Elastic APM? Data like these: 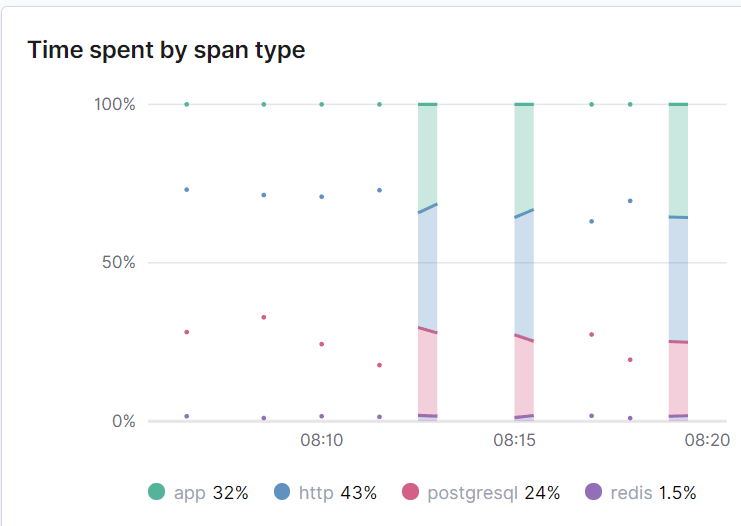 How do I instrument my app?

The most direct way to instrument your app would be to do everything manually. Before you start any operation (API call, database query, or anything you consider a "unit of work"), you record the time you start and any useful data. When it's done, you calculate the time spent and record any other data. For example, if our app sends out newsletters and we want to watch that:

A number of instrumentation libraries, such as Jaeger and the OpenTracing JS client work this way.

The manual approach is alright for recording custom operations, but it can get pretty tiring doing it for every database query or API call. For that, there's another approach: having the dev explicitly request instrumented wrappers of their libraries. For instance, to automatically [instrument your PostgreSQL queries with Zipkin, you'd need to wrap the pg module with Zipkin's library and use that for your database queries.

An even better option is auto-instrumentation, where the APM library automatically identifies the libraries you use and track the operations you do with them. This is how Elastic APM works. Honeycomb's Beeline, DataDog's dd-trace and the OpenTelemetry Node.js client also provide automatic instrumentation. Of course, "operations" don't only happen when you interact with other libraries, so these libraries still let you manually add spans.

So how does automatic instrumentation work in Node.js? How does the APM library know when you've started a new database query? It boils down to Node.js' module system (CommonJS), which allows you to see (and change) what happens when a module is require()d, combined with JavaScript's unique object-oriented flavour that lets you modify the behaviour of objects easily.

A quick dive into the internals

When you call the start() function on the APM client, it does a bunch of configuration and ends up in the Instrumentation class.

You'll notice a list of modules that are supported for instrumentation on line 13. For each module, the agent loads the patch (see the modules folder containing the patches for each module). Then the agent calls the hook() function. This is where the libraries are actually monkey-patched.

The hook() function is provided by require-in-the-middle, another Elastic library. Here's how you'd use the library:

Internally, here's what the library does (simplified):

Module.prototype.require is the require function that the user calls in their code, so we replace that with our own function that will pass the exports through the handler whenever require() is called.

Of course, in the real thing, there's a lot more, like caching, resolving module paths, and handling race conditions. If you'd like to read more about the module system, the Node.js docs are pretty detailed. I've also written a bit about some testing libraries that hook into the Node.js module system. And here's an example of someone else hooking into require.

The last main part is to define the instrumentation for each module, typically by studying its internal API and overwriting those methods. For instance:

The APM library uses the shimmer module for this wrapping.

This is the same as doing object.method = myNewMethod, but Shimmer handles a bunch of edge cases and possible errors, and allows you to reverse it easily, as well.

So there you have it. We've skipped over a bunch of stuff, but these are the basics of how Elastic APM (and other auto-instrumenting libraries for Node.js) work. There's a lot more in the source code if you want to learn more.

The ABCs of TypeScript Generics