I should be able to use pnpm while my teammates use yarn or npm, without issues.

This is a real concern. I've worked on some Yarn projects where I sometimes forget and accidentally run npm. Although these package managers (I'll call them PMs for short) are interoperable to some degree, there are important differences between these tools, so you should know what you're getting into. Even in seemingly simple projects, results can vary. Here are two reports of things working with one PM, but not another. Moreso, running install once is very different from continuous concurrent use, where you're adding and removing packages and more.

Let's talk about the key things that make these package managers different, and then we'll see the extent to which they're interoperable. We'll also see how things are getting better, thanks to the work of some smart folks.

This is the most obvious difference, but also the least significant if your priority is portability. Each package manager has a unique set of features (or the same feature, expressed in different ways). For instance:

But maybe you don't care about these extra features. Your project isn't big or complex, and your dependencies are few (in JavaScript? I doubt that, but okay.😆) and manageable, so you're willing to stick to the minimum supported feature set. You mostly just want to be able to add and remove packages. But you still have to watch out for some behaviour differences.

Being different tools, they have different philosophies and defaults.

Finally, you have to contend with the lockfiles and output.

It's probably well-known that these PMs use different lockfiles with different formats: JSON (package-lock.json), YAML (pnpm-lock.yaml), and uh, YAML-like (yarn.lock). But more important is the information contained within these lockfiles, which isn't always equivalent.

Here's a small experiment. We'll use a dependency tree that looks like this:

Now we'll try installing this with each of the PMs.

Yarn's lockfile is quite easy on the eyes. Here's a snippet:

The Yarn lockfile describes the "logical" dependency tree Yarn has resolved from your package.json. It's a map of entries, where each key is one or more version specifiers Yarn encountered in your dependencies, and the value contains details of the package they resolve to. In this example, this lockfile declares that whenever @shalvah/asdf is requested in the version *, it should be resolved to version 2.3.4, fetched from that URL and verified with that integrity hash. The v2 lockfile adds a few more details, but is substantially the same.

pnpm's lockfile, like Yarn's, stores only the resolutions, but in a slightly different way, as it's not limited by hoisting constraints. 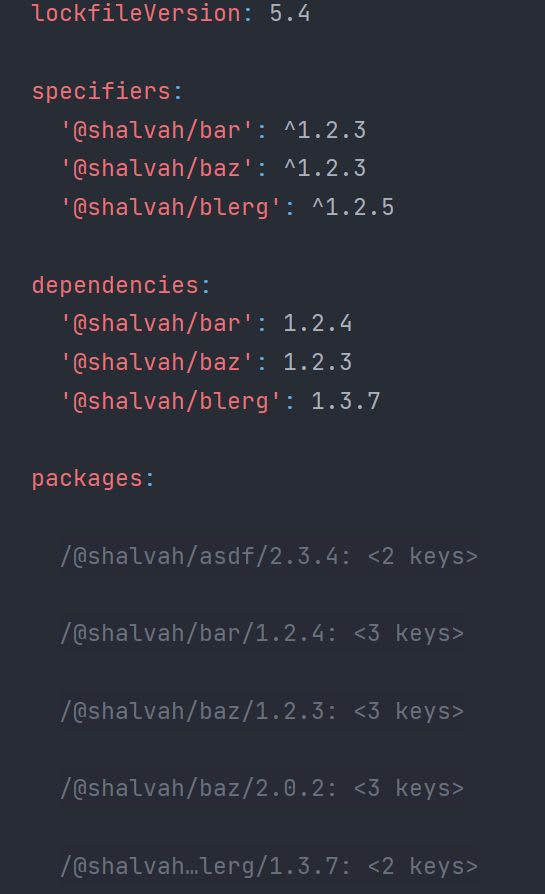 npm's lockfile (as of v7) contains not just the resolutions, but the "physical" dependency tree (ie the exact layout of your node_modules). This makes the lockfile bigger, but also self-contained: npm can recreate the entire node_modules using only the lockfile, while Yarn's lockfile can produce different results on disk if different Yarn versions are used. 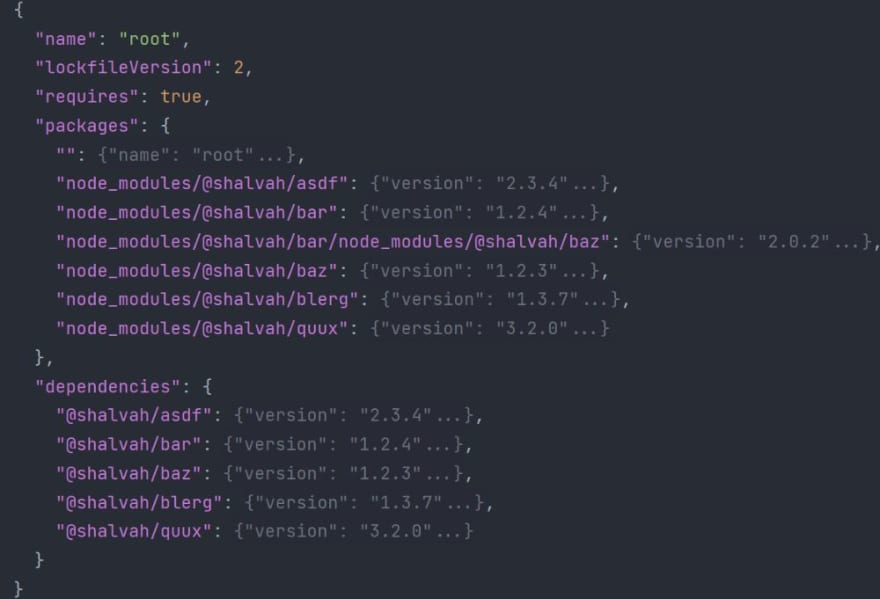 Note: the important part here is the packages node. The dependencies node only exists for backwards compatibility with the older lockfile version.

Speaking of node_modules, not every PM uses them in the same way (or at all)! Yarn 1 and npm generate a "flat" node_modules (all your dependencies' dependencies are hoisted to the top-level as much as possible, in order to reduce duplication). In most cases, the two tools produce the same output by default (but not always). 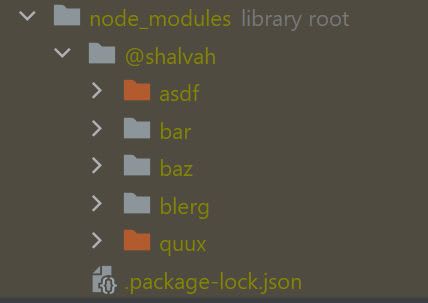 pnpm installs packages globally and then creates a (non-hoisted) node_modules that consists entirely of symlinks to these packages. 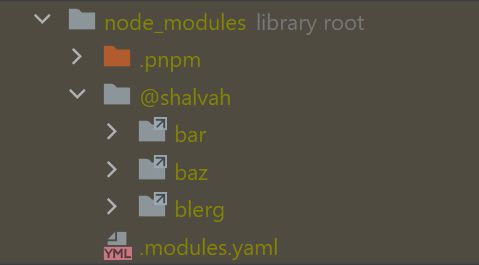 Yarn 2+'s PnP linker (although not the only option) does not use a node_modules folder at all, but instead a different folder, .yarn/cache, where each package is stored as a single ZIP file, and encourages you to commit them. For completeness, this is what the folder looks like in this case:

But all hope isn't lost. The various tools have made some effort to be compatible with some others, to some degree:

That said, I wouldn't recommend relying on these compatibility features. One PM's implementation of another's feature might have minor differences in order to fit in with the PM's design and paradigms. For example, pnpm's flat node_modules version still uses global packages and symlinks, so it's not likely to work well with actual npm output.

Since version 16.9, Node.js has included Corepack. (You can also install Corepack manually on earlier versions.) Corepack lets you use any of these PMs without explicitly installing them. In fact, my experiments with pnpm while writing this post were via Corepack (by using corepack pnpm). I don't have pnpm installed on my machine.

There's a guide to it, but I'll be honest, I haven't wrapped my head around that yet. I just ran these commands, and it worked.

So what can you do?

The best approach is probably to require one package manager for your project. But you can do some things to make it less of a pain for other contributors.

With Yarn (v2+ and v1), you can run set version to lock the project to a specific Yarn version. It will download the Yarn release and include it in the repo, as well as add the new packageManager field in package.json, set to "yarn@<specified-version>".

packageManager is a new field for package.json, intended to define and enforce what package manager and version is used in a project. Corepack respects this; when I try to run corepack pnpm in this case, I get:

Changing the version (but keeping it as Yarn) seemed to make Corepack try to auto=download that version.

Ironically, in my tests, Yarn itself did not seem to respect this field. When I changed the packageManager to other versions of Yarn, or even to npm, Yarn happily continued to work. No other package managers support it at the time of writing, so right now, it's only useful if you're running all your commands through Corepack.

A workaround is to use the older engines field in package.json. All four PMs support this field as a way to define the version of the PM the project needs, but once again, it's a mixed bag. They don't check for the existence of other PMs, just that the version you put in the engines field matches the installed version. However, we can leverage this by using a nonexistent version as the requirement for the PMs we don't want. For example, with this package.json:

pnpm and Yarn will raise an error. Unfortunately, npm will only warn you, so you need to set engine-strict=true in the .npmrc as well. Here's what the error messages look like:

With Corepack, you wouldn't have to tell folks to install a new package manager. You could prefix all the PM commands in your docs with corepack, so users can get productive right away. It still has some rough edges, but combining either of the above with Corepack should be a good starting point.

If this is a big enough problem for your team, you can even throw in some extra tools to help: