Welcome to this week's article peeps 👋, where I would be talking about git, why it's important to you as a developer/engineer and how to get started with it.

Each snapshot or state of the files and folders in a codebase at a given time can be called a "version". Version control systems were created to allow developers a convenient way to create, manage, and share those versions. It allows them to have control over managing the versions of their code as it evolves over time. It also enable collaboration within a team of software developers, without losing or overwriting anyone's work (it prevents intra-company fights and brawls 🔥) . After a developer makes a set of code changes to one or more files, they tell the version control system to save a representation of those changes.

First thing to note: Github is not Git! Github is a platform (a service) used by developers (who use git) to upload and download resources and source codes. Git is used to connect and interact with Github to download and upload resources. There are other platform aside from Github used for versioning, some of which are GitLab, GitBucket, etc. With over 73 million user base, Github is a very popular and a favorite of many. If you don't have an account yet, head over there and set one up now!

Head over to Git.com to download git installer, it can also be installed via the command line but let's do it the easy way 😉.

After downloading and running the installer, the next thing to do is test that the git installation was successful. Navigate into any folder using the cd command. Run the command git init. If you get the message "Initialized empty gi...", voila! you've had a successful installation!

After that, run the command:

This creates two files, ~/.ssh/id_rsa and ~/.ssh/id_rsa.pub. On windows, head into your C:/username folder and look for a folder called .ssh (You might need to enable "Show hidden files" to see it). On Linux, it would be in your "Home" folder (*also a hidden folder). Navigate into that folder and open the one called id_rsa.pub. 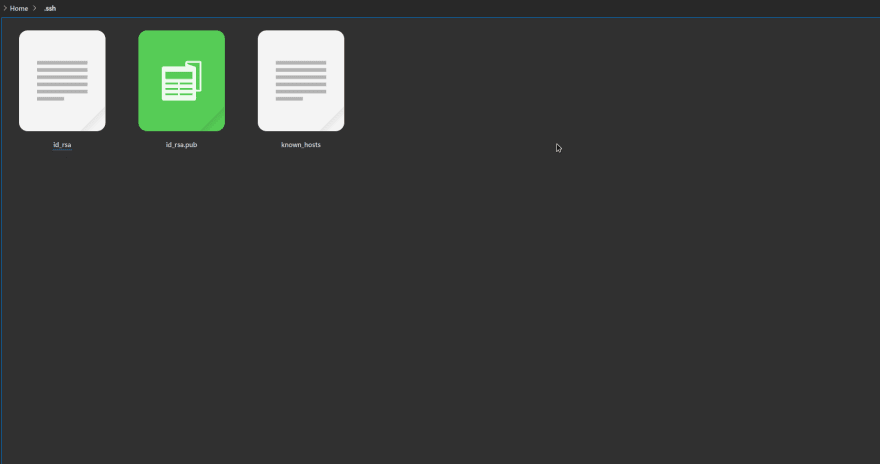 You would see a long string of gibberish in there ending with your email, that's good. Head over to Github and go to your settings

Head to the "SSH and GPG" keys and click "New SSH Key" in the top right corner. Give your ssh key a name and paste that gibberish in the id_rsa.pub file. Click "Create key" and head back to your terminal. Run the command:

If you get a message like: "Hi username, ...". Then, mission successful!

Let's discuss some of the terminologies you would find in the git ecosystem (including GitHub), after all, you need to be able to speak like a version control master 😄. I would be using remix-pwa as an example here.

A repo example on Github. This can be used to view changes and if needed, reverse those changes. Plus, Github gives a lot more features.

A branch system in a repo, each of these branches contain different versions of code of a particular project. One benefit here is that I can compare across branches and edit a project's source code without "destroying" the project itself. Think of a project as a tree, and different versions as different branches.

If I wanted to make a change to this person's work, I would fork it then edit, and not edit it directly.

This is an example of a merged PR. We have two different versions (two different branches in this case) and we want to combine their content. We open a PR, and then if the change we want to merge is valid (has no bugs or issues), we merge.

An issue example, in this case, there is an issue with using this project that the developer hasn't fixed yet. A user can easily come here and contact the developers directly who can offer solutions, fixes or alternatives.

That's ten popular keywords used in git and github for you guys 😄, there are a lot more you can read up on by yourself. If you know of anymore and want to share, let's hear it in the comments!

That's enough talk! Let's do a miniature project and implement git in it. Open up your terminal and navigate to a directory (as always, I would be using "Documents"). Run the command:

The command mkdir means "make directory" and is used to create a directory in the folder we're in (in this case, git-example). Afterwards, use the cd command to navigate to the newly created folder. Let's now create the files we would upload to github, as a person with Javascript running in their veins, we would create a very simple js example (don't worry if you don't know js). Run the command:

The command touch creates that particular file in our current directory, in this case, example.js. Open up an editor and let's write a very simple conditional statement in JavaScript.

this code initializes two variables, a and b with two different numbers (12 and 13). We later assigned 12 to the variable b. We then had an if statement, if a is equal to b, then log a message in the console, if not, log a different message. Okay! Let's push to Github!

Open up your github's repo page and click "New Repository". I would be calling mine "DEV-example", make sure the visibility is set to public (other users would be able to view your source code). Add a description for your repo and skip the remaining questions and boxes below, click "Create repository".

Head back to the terminal of your project and run the commands:

Let's run through each command, git init initializes an empty, local repo in your project (a .git folder).

git remote add origin <URL-of-the-repo>.git is used to tell your local repo the location of the remote repo, where on the cloud are we connecting to, to store our repo.

git add . is used for staging, normally, we use git add <name-of-file> but as a shortcut, you can use . to stage every file in the directory (except the .git local folder).

git commit -m "Initial commit" is used to commit our project. The -m part is called a "flag". Flags are used to pass arguments to a command, in this case, the flag -m stands for "message" (Every commit must have a message, usually, this should contain a brief description of what your changes consists of or what they do). The text between the double quotes is the message argument we want to pass to the commit command.

git branch -M main is used to change our branch (also known as rebasing). The -M flag here means "move" and what it does is "move our current folder content to the branch called 'main'".

git push -u origin main is used to push our local changes to our remote repo. The -u flag is used to track that repo changes (useful when pushing to a remote repo for the first time). It means "set up an upstream tracker to track changes". origin main is telling git where to push to, which branch should it push to, in this case, our branch "main".

Head back to your github repo and refresh the page, voila!

That's it for this week's peeps, I would still try and write as often as I can but it would be an irregular writing schedule 😅. Keep the comments flowing with questions or observations, we would love to hear them. Remember to keep reading, learning, and coding. And don't forget to play now and then! Love you guys, cya in the next article 👋.

Strategies for building products with no code