Apache Druid is a columnar database, focused on working with large amounts of data, combining the features and benefits of Time-Series Database, Data Warehouse, and a search engine.

The general task is to set up monitoring of the Druid cluster in Kubernetes, so at first, we will see what it is in general and how it works, and then we launch the Druid to configure its monitoring.

To run Druid itself in Kubernetes, we will use druid-operator, to collect metrics -  druid-exporter, to monitor  it all -  Kubernetes Prometheus Stack, and we will run all this in Minikube.

The main feature of Druid for me personally is that the system was originally developed for use in clouds such as AWS and Kubernetes, therefore it has excellent scaling, data storage, and recovery capabilities in case one of the services crashes. 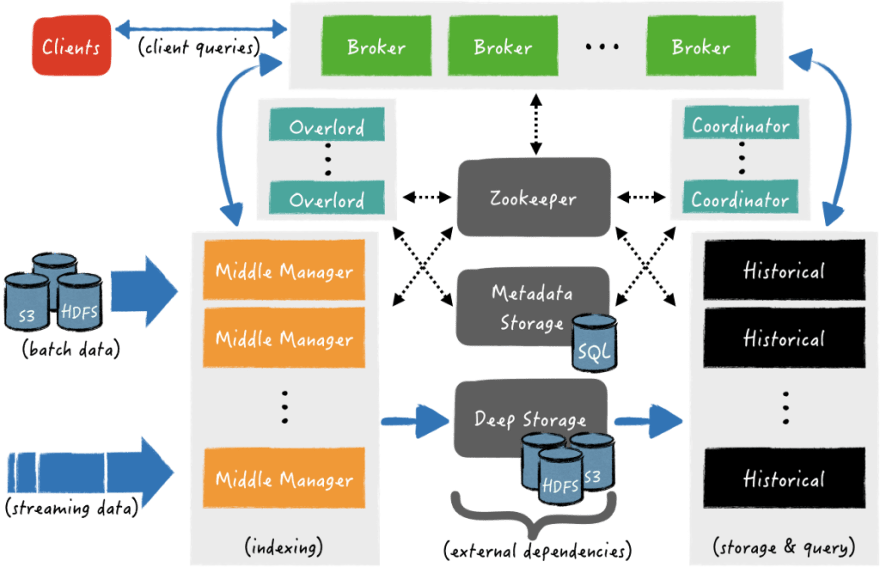 Druid has several internal services used to work with data, and these services can be grouped into three types of servers — Master, Query, and Data, see Pros and cons of colocation.

Data servers — manage the addition of new data to the cluster and store data for clients:

Adding data can be divided into two stages: in the first, Middle Manager instances run indexing tasks, these tasks create data segments and send them to the Deep Store.

In the second, Historical instances download data segments from the Deep store to use them when forming responses to customer inquiries.

The first stage is getting data from external sources, indexing and creating data segments, and uploading them to the Deep store: 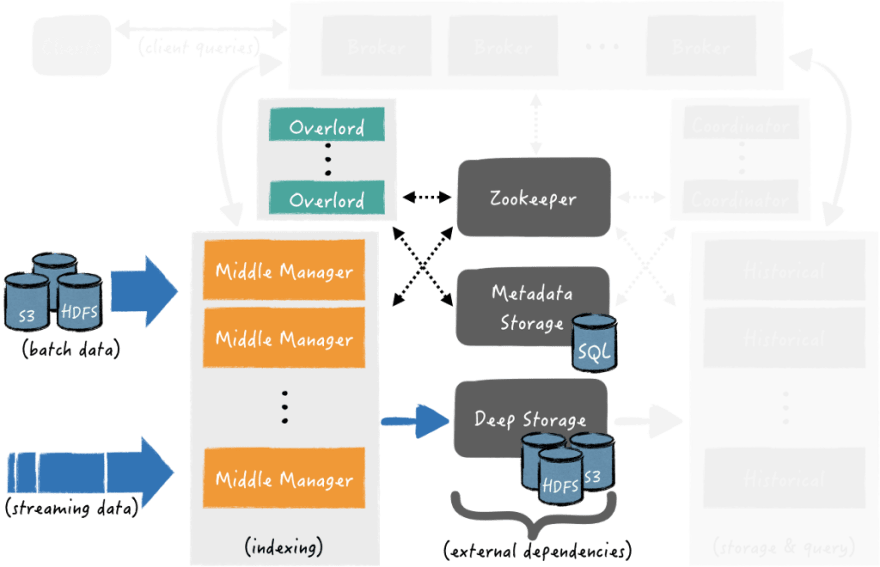 At the same time, in the process of creating data segments, they are already available for executing queries on them.

In the second stage — the Coordinator polls the Metadata store in search of new segments. As soon as the Coordinator process finds them, it selects the Historical instance, which must download the segment from the Deep store so that it becomes available for processing requests: 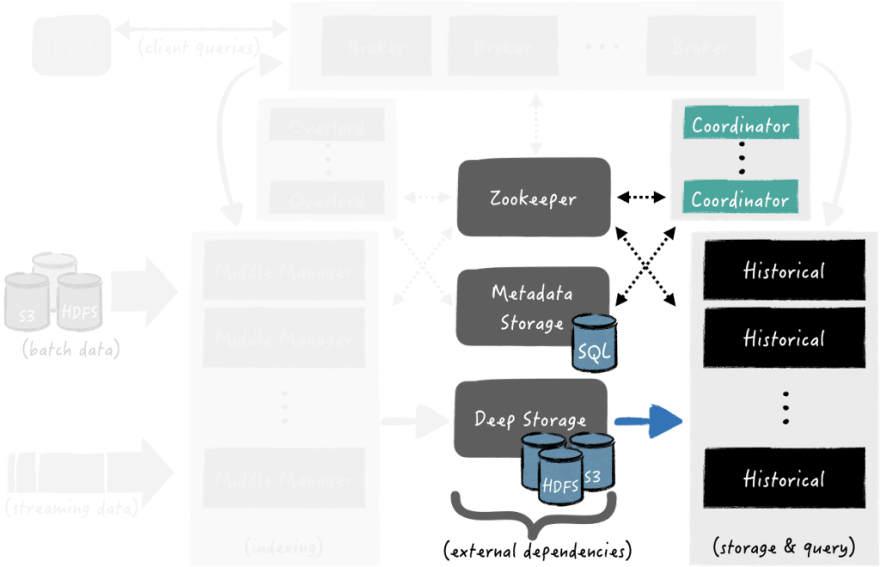 Clients send requests to Broker directly or via Router. 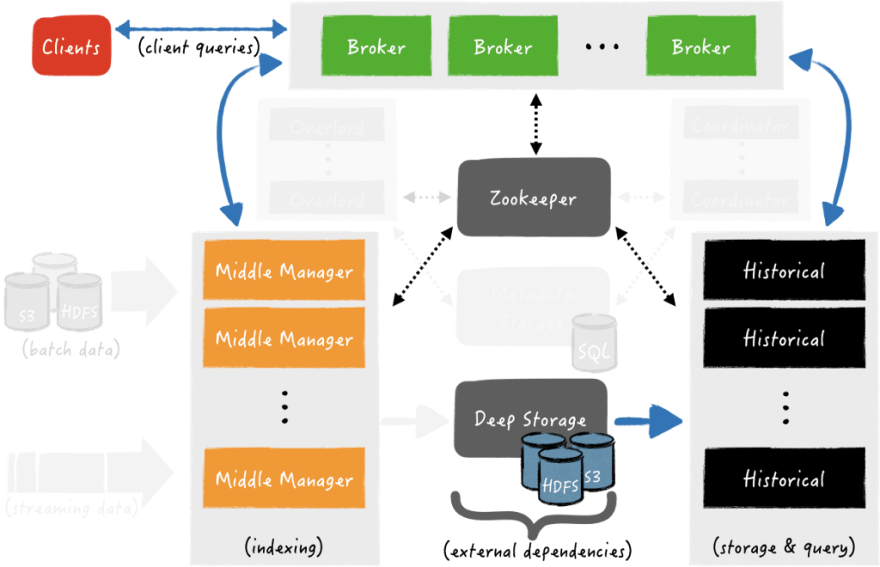 When such a request is received, the Broker determines which processes are servicing the required data segments.

If the data requires segments both from the Deep store (some old ones) and from the Middle Manager (which we get right now from the stream), then the Broker forms and sends separate subrequests to the Historical and Middle Managers, where each of them will perform its part and will return the data to the Broker. The broker aggregates them and answers the client with the final result.

Next, let’s try to deploy this whole thing and poke it with a twig, and then add monitoring from above.

Run Minikube, add memory and CPU to run all the pods quietly, here we allocate 24 RAM and 8 cores — Java is there, let it eat:

Let’s move on to installing the Apache Druid operator.

Create a Namespace for the operator:

Set the operator to this namespace:

Move on to creating a cluster.

To create a test cluster, use the config from the examples — examples/tiny-cluster.yaml.

Wait for the pods to switch to Running (it took about 5 minutes), and forward the port to the Druid Router:

You can look into Druid Services — we will see the same services that we saw in the form of Kubernetes pods:

Here is a good short video with an example of loading test data — for the sake of interest, you can walk.

Let’s move on to installing Prometheus.

Wait a few minutes until everyone becomes Running, and open access to Prometheus:

To get the password from Grafana — find its Secret:

For Grafana there is a ready community дашборда, we can add it for now, but later then we will make our own.

Open localhost:8080 in a browser, log in and go to Dashboards > Import: 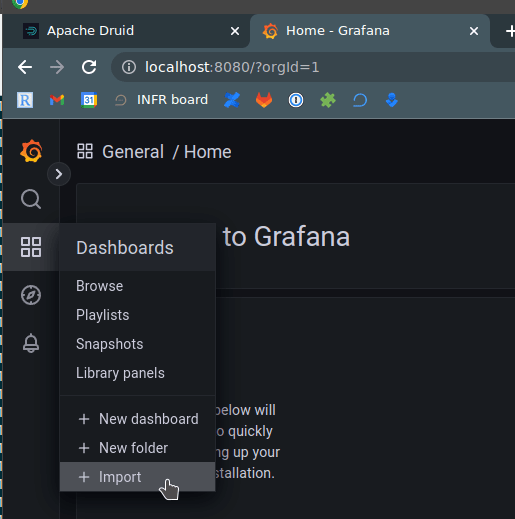 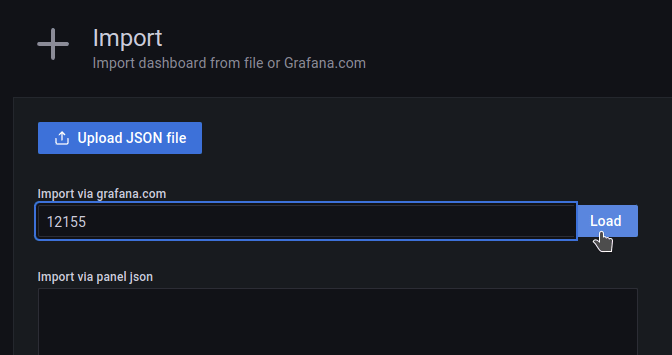 Choose Prometheus as a datasource: 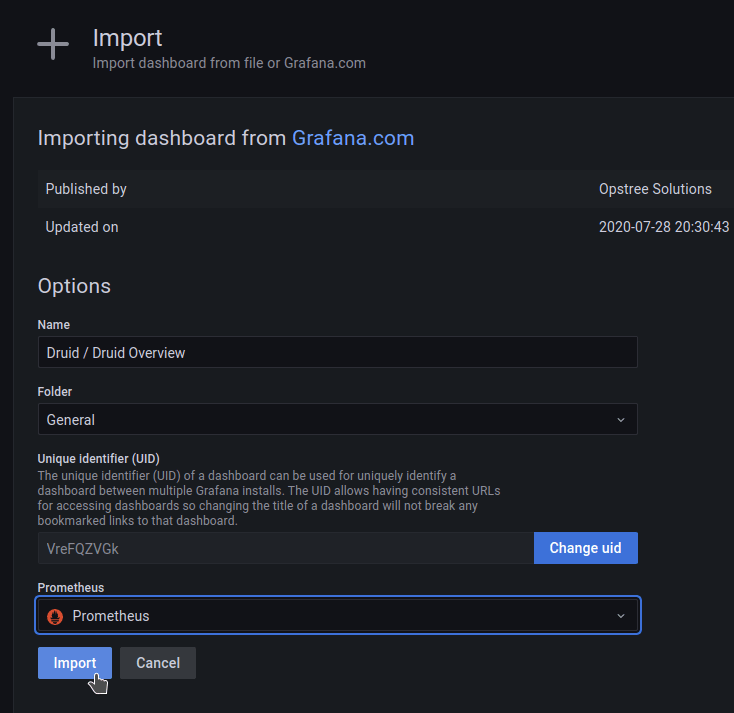 And we got such a board, but so far without any data:

Install the exporter in the namespace monitoring, in the druidURL parameter we specify the URL of the Router service of our Druid cluster we just looked above, its port, then we enable the creation of Kubernetes ServiceMonitor and the namespace in which Prometheus (monitoring) works for us:

Okay — already something, although not enough yet. Let’s add data collection to Prometheus, and then we will add more metrics.

Check Prometheus Service Discovery — all our ServiceMonitors should be here: 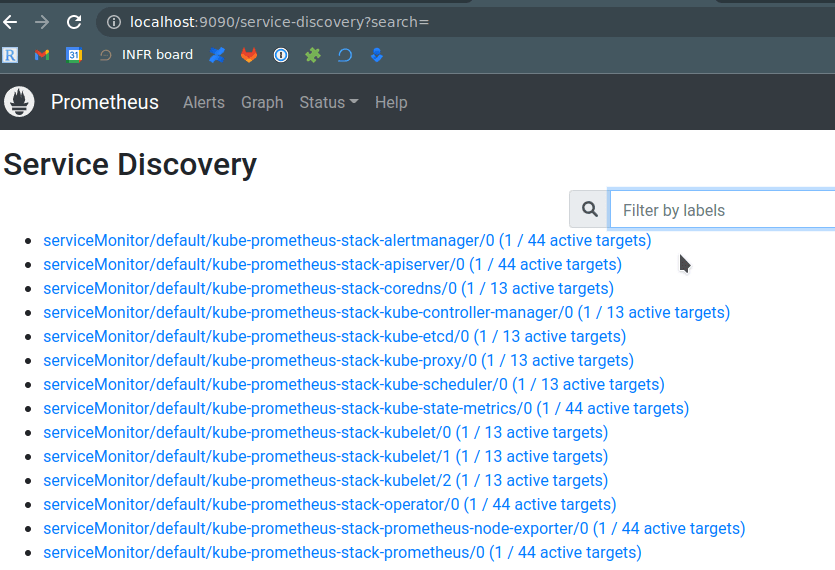 Check if Druid ServiceMonitor is created in Kubernetes:

Check the Prometheus resource  -  its serviceMonitorSelector:

Add a new label release: kube-prometheus-stack, so that Prometheus starts collecting metrics from this ServiceMonitor: 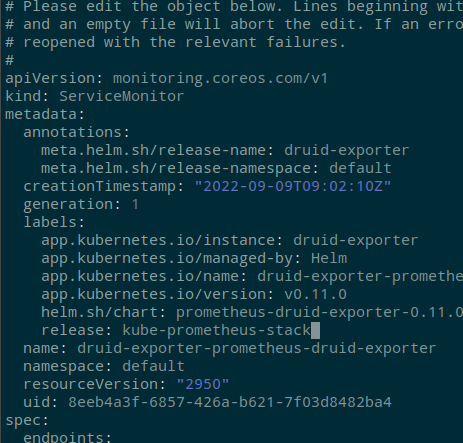 Wait a minute or two, check the monitors again:

Okay — now we have Druid Cluster, we have Prometheus, which collects metrics — it remains to configure these same metrics.

Druid’s monitoring setup includes Emitters and Monitors: emitters “push” metrics from the Druid “out”, and monitors determine which metrics will be available. At the same time, for some metrics it is required to include additional extensions.

All services have common metrics, for example query/time, and your own, for example, there is a metric for Broker named sqlQuery/time, and these additional metrics can be enabled for a specific service through its runtime.properties.

To enable metrics emission  -  edit examples/tiny-cluster.yaml, and to the common.runtime.properties add the following:

Save, update the cluster:

Wait a minute or two for the pods to restart and start collecting metrics, check the metrics in the Exporter:

In the label exported_service we can see a Druid's service and in the metric_name - which metric exactly.

For example, I want to know the CPU consumption of each of the processes/services.

In the same examples/tiny-cluster.yaml in the block common.runtime.properties add the following:

Save, update the cluster, wait for the restart of the pods, and after a couple of minutes check the metrics: 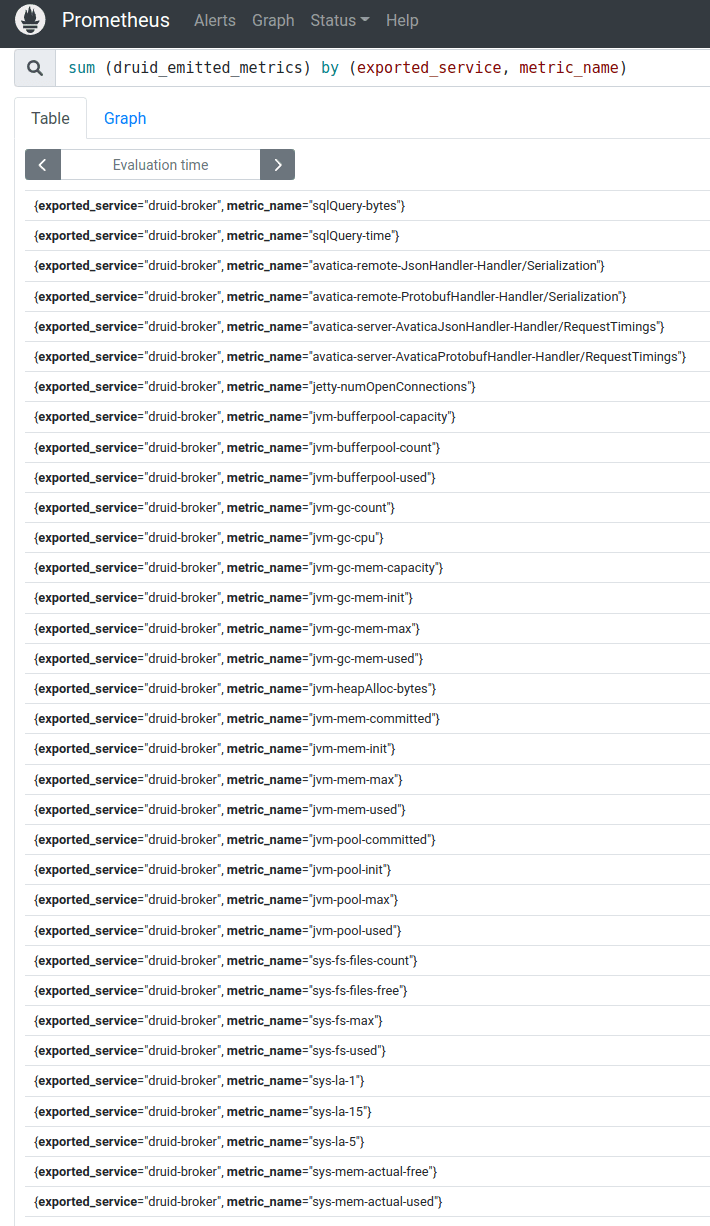 And a dashboard in Grafana:

In Running/Failed Tasks, we still have No Data, since we didn’t run anything. If you load test data from the already mentioned video, then these metrics will appear.

And already having monitoring, it will be possible to drive some load tests and play around with cluster performance tuning, but this is all in the next parts.

How do I connect 2 different GitHub accounts on MacOS

How to Mock an API in ONE minute

How to Create a Product Review Application in Next.js