How to catch and fix a dependency injection issue using Sensei

The Sensei project itself has its own set of recipes that have built up over time, this is an example of one of the scenarios the Sensei team built a recipe to cover. A misconfiguration of Guice, which led to a NullPointerException being reported at runtime during our testing.

This could be generalised to many Dependency Injection scenarios where code is syntactically correct, but because the wiring configuration was incorrect, an error slips through.

This often happens when we are learning the technology, and we keep making the simple mistake of
forgetting to wire things up. But this also happens to experienced professionals because, well... we all make mistakes, and we may not have Unit Tests to cover everything.

The code below fails at runtime with a NullPointerException.

The code is syntactically correct but fails because we missed out a requestStaticInjection in our SystemOutModule configuration.

When we try to use the reporter, created using the Injector, it is not fully instantiated and we receive a NullPointerException when we call reportThisMany.

We may well have missed that in our code review, or we didn't have unit tests that triggered the dependency injection, and it slipped out into our build.

In this case, there is a warning sign, the CountReporter has a static field annotated with @Inject but... the CountReporter class itself is package private. In a complicated code base this could be a warning sign that it isn't used because the Module class configuring the bindings needs to be in the same package for this to work.

Another error that we made, which we might have picked up in a code review, is that we forgot to actually bind the fields in the SystemOutModule configure method.

Had we written the requestStaticInjection code then the Syntax Error generated when trying to use the CountReporter would have alerted us to the simple error.

Sadly. We forgot, and there were no syntactic warning signs in the code.

How could Sensei help?

We probably wouldn't use Sensei to pick up the missing requestStaticInjection since all
our Guice configuration wiring would need to use that method, and we can't guarantee that
all wiring is going to be as simple as this use-case.

We could write a Sensei rule to look for some warning signs that our code is not up to scratch.

In this case that would mean:

The above was the warning sign that they were unlikely to have been wired up.

By creating a recipe, then we will have a warning sign early, during the coding, and reduce the reliance on our pull requests or resolving our tech debt to allow us to add Unit Tests.

How to create a recipe?

The task I want to complete is:

That should hopefully give us enough warning to identify any Modules using it and add the missing wiring code.

In my CountReporter class, I will use Alt+Enter to Create a new Recipe and I will start from scratch

I will name this and add a description:

The search I write looks for a field with the Inject annotation which has not been scoped as public. 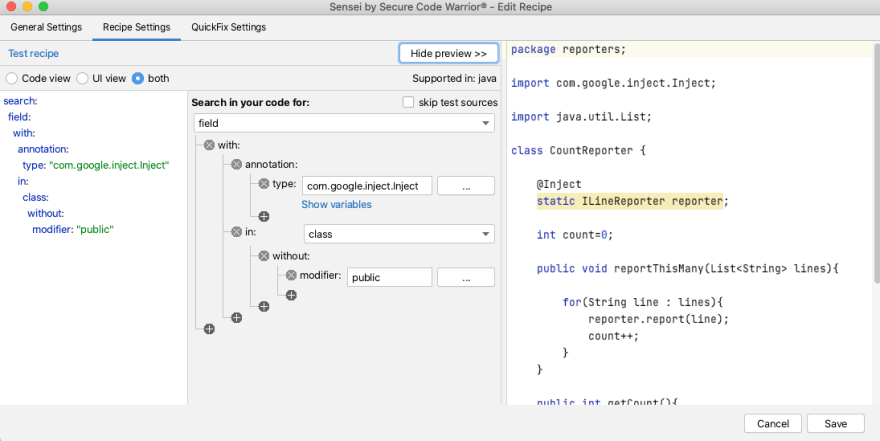 The QuickFix in the recipe will amend the injected class, but that is not the only code I have to change.

When the recipe is triggered I still have a manual step to perform in my code, adding the line containing requestStaticInjection to fully instantiate the object.

I could potentially write another recipe to pick this up. I probably wouldn't do that unless forgetting to add the static injection became a semi-regular error that I made when coding.

If we ever find ourselves making a mistake with a common root pattern, then Sensei can help codify the knowledge around detecting and fixing the issue, and then hopefully, it won't slip through code reviews and into production.

Also, the recipes and QuickFixes that we write, don't have to be fully comprehensive, they need to be good enough that they help us identify and fix problems without being overcomplicated. Because when they become overcomplicated they become harder to understand and harder to maintain.

You can install Sensei from within IntelliJ using "Preferences \ Plugins" (Mac) or "Settings \ Plugins" (Windows) then just search for “sensei secure code”.

The source code and recipes for this post can be found in the sensei-blog-examples repository in the Secure Code Warrior GitHub account, in the guiceexamples module.

Running java programs from the terminal

Why Kotlin: A Note From a Java Developer

Utilising ListView and ArrayAdapter in Java