For the past few weeks I've been doing a lot of research into Raspberry Pi SATA hard drive support. This particular internet combing event was all started with the Rock Pi Dual/Quad SATA HAT announcement back in Dec. Lets just say its been a fruitful adventure. 😜

Disclaimer: I have not been paid or received any compensation for the collection of words & thoughts about the products mentioned below.

I've always liked the idea of using a Raspberry Pi (RPi) as a storage management system. But I've never liked the idea of a bunch of USB enclosures hanging off a tiny RPi. It's always been a messy solution to me, especially when wanting to drive multiple 3.5" hard drives. Which would require a power source for each HD enclosure. I did look into attaching a multi disk JBOD to a RPi, but that still adds an additional power source & another device to maintain. I've considered buying an off the shelf NAS like a QNAP or Synology instead of build out a RPi solution, but I've always felt they were over priced and not power efficient enough. Not to mention these companies have had a hard time staying compliant with the licenses of all the open source software they leverage.

The biggest draw for me with the RockPi QUAD SATA HAT solution is that it would allow me to have a single power source to drive my entire RPi NAS concoction for either 3.5" or 2.5" hard drives. Not to mention that this RPi SATA hat solution supports true hard drive power management from the OS, unlike a basic USB enclosure. The ability to spin down a hard disk array is critical to the longevity of a spinning disk hard drive & the reduction of power consumption of the entire system that isn't accessed 24/7.

Another big benefit for me would be that I'd then be able to decommission my aged DIY Franken-NAS that I feel like I've duct tap repair too often. Not to mention that keeping running 24/7 it out of the question because of fan noise & power consumption.

Buying for the recipe 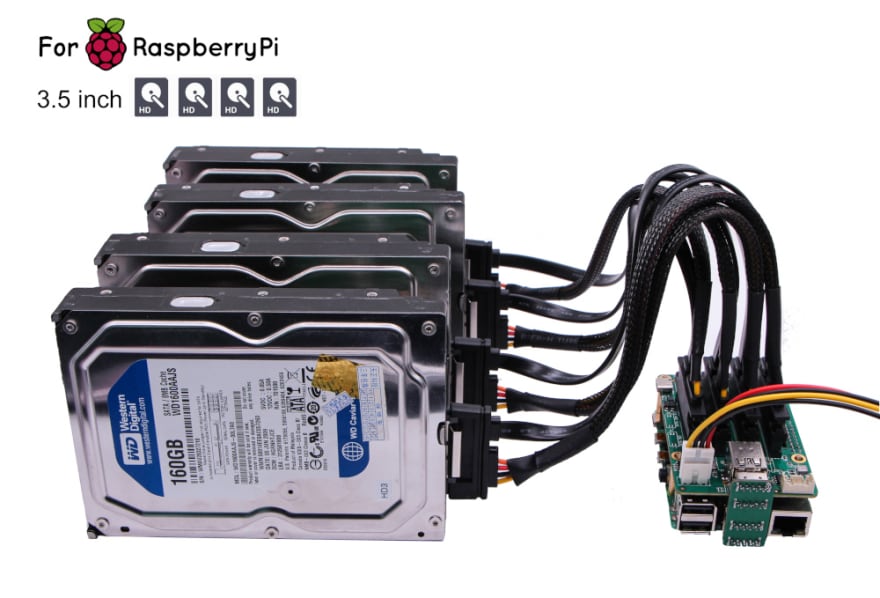 Finding an adequate solution took some time. It all came down to balancing the "ultimate dream" against cost, my ability to reuse existing hardware, space constraints and estimating the true potential usage. The long pole of my research came down to the RPi version compatibility across the various add-on boards/hats and determining the right way to power the system. From all of my solution searching, I become even more confident in my decision to purchase the Rock Pi Quad SATA HAT solution.

Now with a shopping list in mind [or digital paper] and narrow down the just the essentials. I sought out the true best pricing and availability of the items I was planing to buy.

I was so ready to put my money where my mouths was, but didn't purchase the Rock Pi board for the following reasons.

So for a short time [I hope] the build out of my RPi NAS will be on hold. Once the version 1.2 is available I'll be buying one or two Rock Pi Quad SATA boards and do a write up of the build out process.

Add Fade In and Fade Out Effects With FFMPEG!

How are docker images built? A look into the Linux overlay file-systems and the OCI specification

Ken Simeon
Developing software solutions for too many years. The majority of my time has been either Managing Software Development efforts or as a Software Quality Engineer.
Top 5 IDEs/Code Editors for Web Development
#productivity #git #webdev #javascript
Give a kick-Start to New Year with this Free Notion Template 🚀🔥
#productivity #showdev #watercooler
I finally graduated and now I have time to write again!
#blog #career #devjournal #writing