Welcome back to my series, where I go over the little java quirks and obstacles that I encountered on my journey. In this installment I will discuss one of the concepts that I struggled to wrap my head around and that is: reassigning an parameter variables. I am referring specifically to reassigning object parameters because the concept of mutability only applies to non-primitive data types.

I'll begin by describing what I was trying to do and later on I will explain why it did not work.

There came a time where I decided it was a good idea to reassign an object inside of a method. I was trying to be clever and Java just did not want to play along. The method went something along the lines of...

At first glance, you may get the impression that this code is flawless, after all it was written by myself 😏. The program reads in text from a CSV file and creates contact objects from it. I then took that list of contact objects and made an array out of them. My aim was to create an impure method, process() , that filters out objects in an array that met some criteria. The intention was to create a new array of a different size and assign that new array to the parameter, thinking that it would make those changes to the original argument. When the code was run, it left the argument unchanged.

You can try and find out what is wrong with it but I think its pointless unless you really have a thorough understanding of Java. The error is on the 3rd line of code from the bottom (arr = result). Let me explain, when you reassign a parameter variable, it does not make any changes to the argument variable. Java will not throw an error or tell you that what you are doing is illegal. You will just have to suffer there in silence, questioning logic and your ability to code altogether.

The modify method will not make any changes to the myarr array because you cannot reassign an argument inside of a method.

Note: 📋 You may want to familiarise yourself with the concept of mutability before continuing. Knowing the difference between pure and impure methods should suffice.

I often hear the words argument and parameter used interchangeably even though they are not the same thing. To avoid confusion I'll define an argument, a parameter, and help you distinguish between them.

An argument is a variable, which usually holds a value of the variables data type, that you pass into a method. A parameter is an alias or copy of the argument, and if it is of a reference data type then we can use it to manipulate the argument inside the scope of a method that it was passed into. 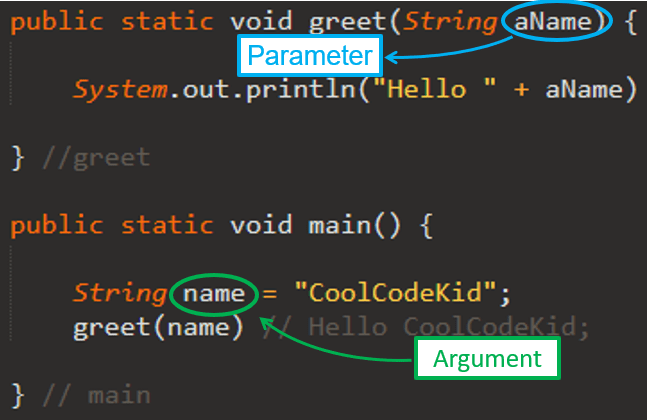 Hint: 💡 It is good practice to name parameter variables with an "a" prefix to the name of the argument. It helps, whoever is reading the code, keep track of which variables are arguments and which ones are parameters as well as which arguments are assigned to which parameters.

Parameters, like variables, can be a primitive or a reference data type. Java handles them differently in each case.

When parameters are primitive

When parameters are of a primitive data type then Java will simply create a separate copy the value the argument in memory. 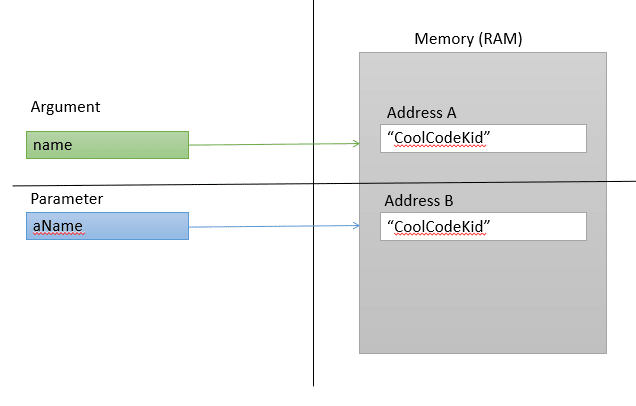 When parameters are non-primitive(reference data type)

When dealing with reference data types, variables do not store the object assigned to it, but it stores a pointer which has the address of where the object is stored in memory. 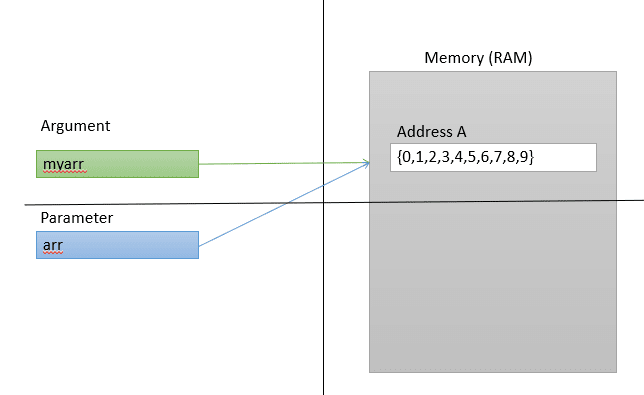 It is because we are dealing with pointers that we have the power of mutability. If 2 pointers point to the same address (object) in memory and either one makes changes to it, then the other will reflect those changes. This means that by changing the attributes of objects that are referenced by parameter then the object referenced by the argument variable will reflect those changes. This is because both the parameter and argument will point to the same object the same object in memory.

In other words, if the parameter variable, arr makes changes to the array that it references in address A then the argument myarr will also have those changes because they reference the same object 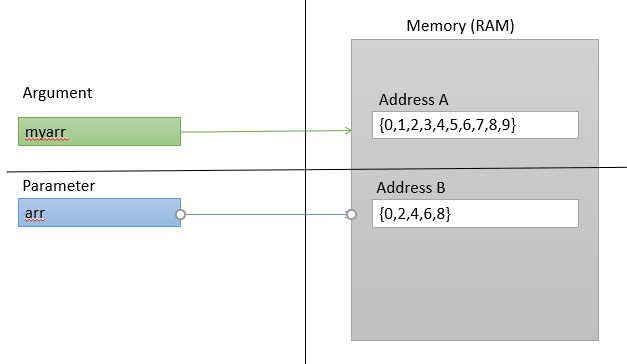 If we assign the parameter, arr to a new array, which is stored in Address B, we will no longer be able to mutate or make changes to the argument by changing the parameter.

There are many ways to work around this issue that I had, it all depends on the situation. I had to resort to changing the filter() method by returning the filtered array and use the object = object.method() syntax to store the result parameter and store that in the argument. I know it is not the most elegant solution but I was pressed for time. I should have actually used a LinkedList because by doing so, I would have been able add and remove objects from my List by using the .add() and .remove() methods on the parameter and it would mutate the argument, meaning there would be no need for the reassignment of the parameter. Alternatively, I could have declared a global variable that I would manipulate inside any method, removing the need for a parameter and argument to reference the object of interest.

The concept of mutability is powerful, that is if you know how it works and when to use it. Mutability allows us to make code that is more intuitive and self explanatory. sort(list) is much easier for beginners to interpret than list = sort(list). This problem I had is just one of those corner cases that I thought could have done with better explaining. It would have saved me a lot of time.

As always thanks for the read and Happy Coding 💻!

How to convert file to string in native java ?