Below is the updated code with keys: 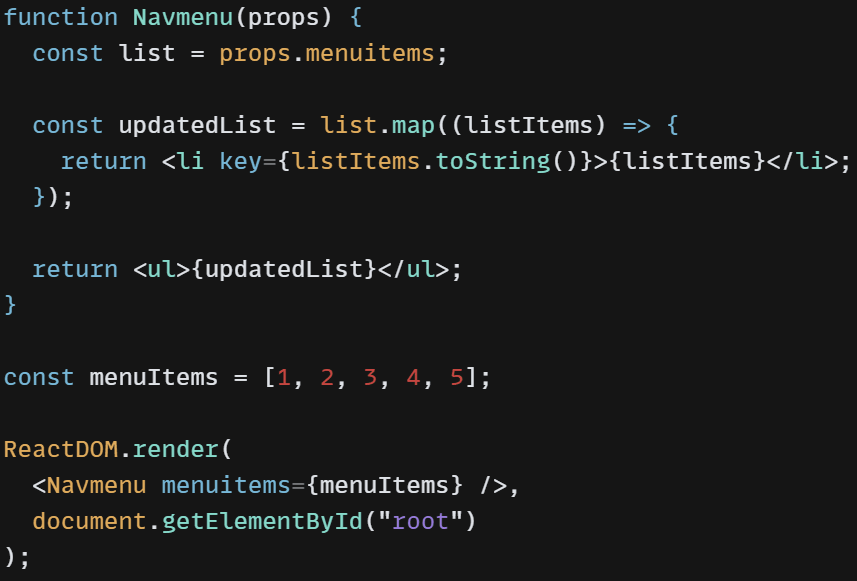 This code will give the same output as that of the previous code(demonstrated in the List module) but this time without any warning. Keys are the most useful when we create components dynamically or when there is alteration of any sort in the list.

Consider a situation where you have created a separate component for list items and you are extracting list items from that component. In that case, you will have to assign keys to the component you are returning from the iterator and not to the list items. That is you should assign keys to and not to “li” tag. A good practice to avoid mistakes is to keep in mind that anything you are returning from inside of the map() function is needed to be assigned a key.

MenuItems is the component to be extracted.

Navmenu is the component that will return an unordered list.

The code above can be found in the link given below:

How to convert HTML To React Component

Get To Know About Proxycurl.

Once suspended, savvyshivam will not be able to comment or publish posts until their suspension is removed.

Once unsuspended, savvyshivam will be able to comment and publish posts again.

Once unpublished, all posts by savvyshivam will become hidden and only accessible to themselves.

If savvyshivam is not suspended, they can still re-publish their posts from their dashboard.

Once unpublished, this post will become invisible to the public and only accessible to SavvyShivam.

Thanks for keeping DEV Community 👩‍💻👨‍💻 safe. Here is what you can do to flag savvyshivam:

Unflagging savvyshivam will restore default visibility to their posts.