I recently attempted to set up a pipeline using Jenkins for my Python projects. The process was not straightforward, but I was able to figure it out.

I'll try to describe how I did it in this article so that anyone starting off or working on a project like it can follow the guide.

To check if you have docker installed on your computer, open up your terminal and execute the command "docker" If docker is installed, you should see something like to this. If not, download and install docker, now let's do something more fun, lol. 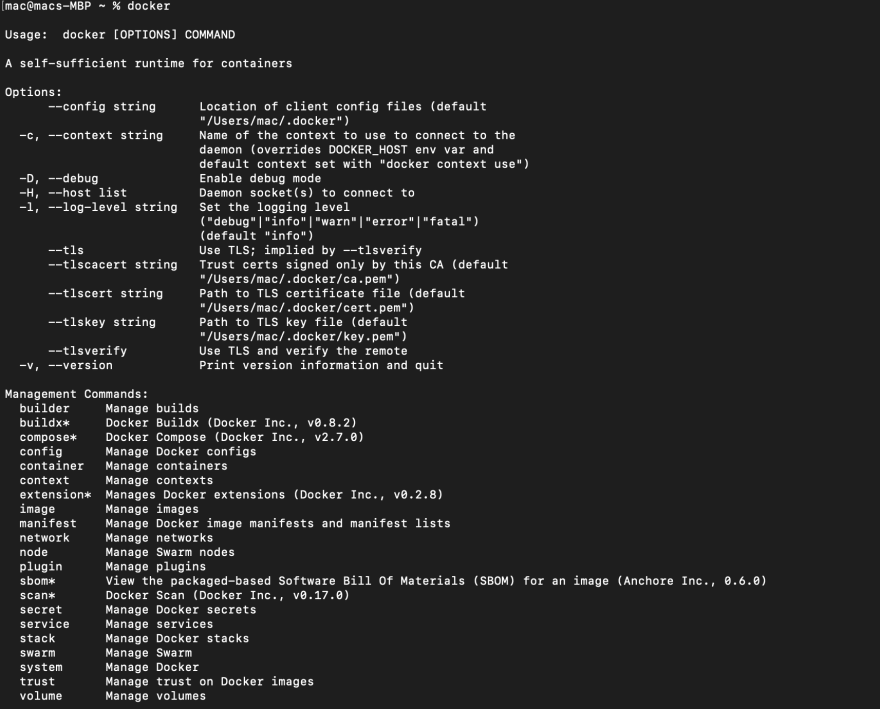 Next we would installed jenkins on docker with the following command 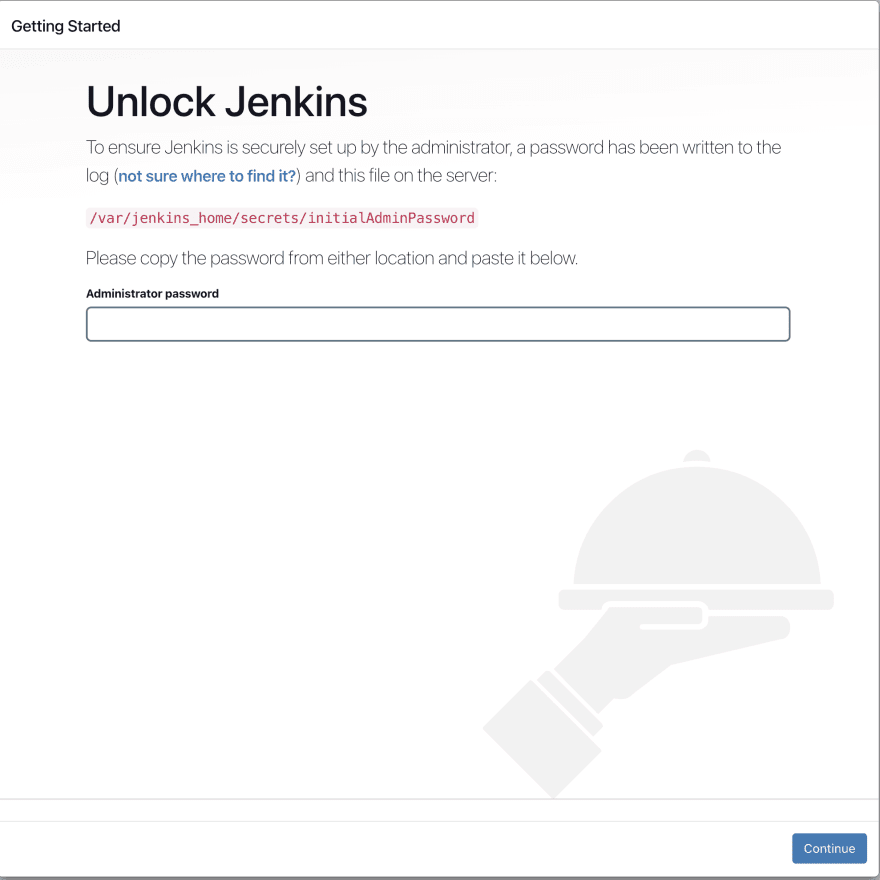 You should see the Dashboard Page 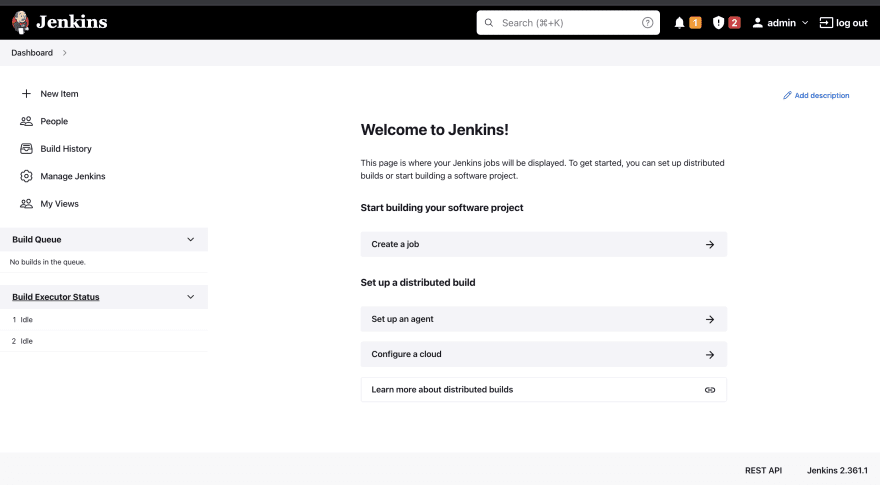 Click on New Item on the Sidebar, give the Item a name and select Pipeline then click on OK. 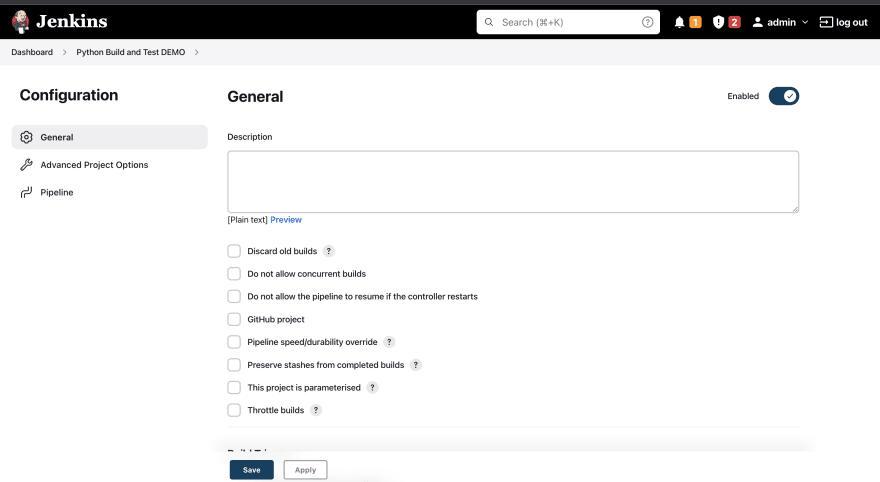 Provide a description that is appropriate for your projects, then scroll down to the script section.

A walk through on what the code does

-CHECKOUT
We created a pipeline script to checkout of our GitHub repo during the checkout stage and placed it inside the stages braces. "https://github.com/DevOlabodeM/pytest-intro-vs-M

-BUILD
Inside the braces{}, in the build stage, we generated a pipline shell script for our python file to run here you would have to install python3 on your container so, run 'docker ps' to see what containers are running - copy the container ID for Jenkins, such as '8f7c957e19fd' afterwards - To open an interactive terminal within the Docker Container, use the command 'docker exec -it -u 0 8f7c957e19fd /bin/bash' (user 0)
Run the following commands to install Python3 and pip within the Docker container

-TEST
In the test stage, we generated a pipeline shell script to test our python file, then 'pip install pytest' will install the pytest package, which will run the unit/integration tests during your test stage in the pipeline. 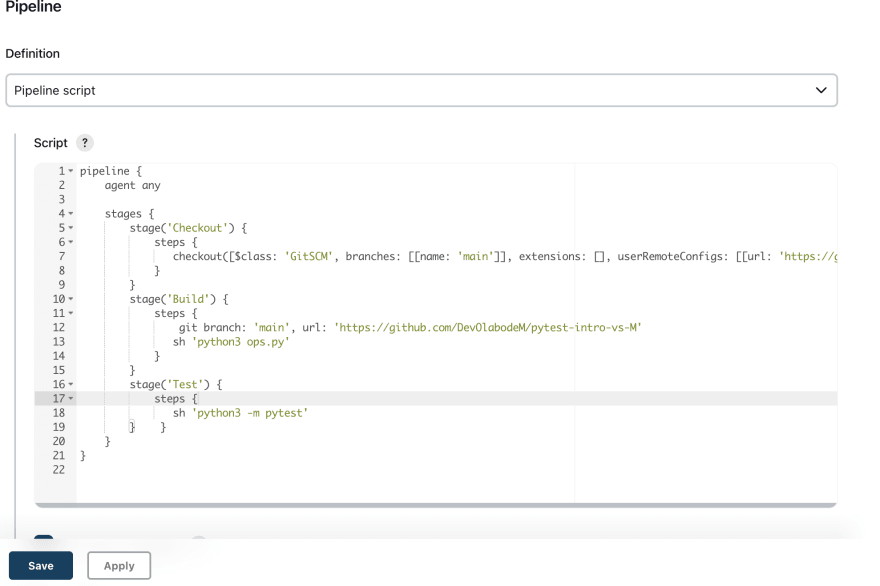 Viola! We've built our Pipeline; now it's time to put it into action. To do so, go to the sidebar and click Build Now, and the Pipeline will start.
If Pipeline was built properly, you should see this 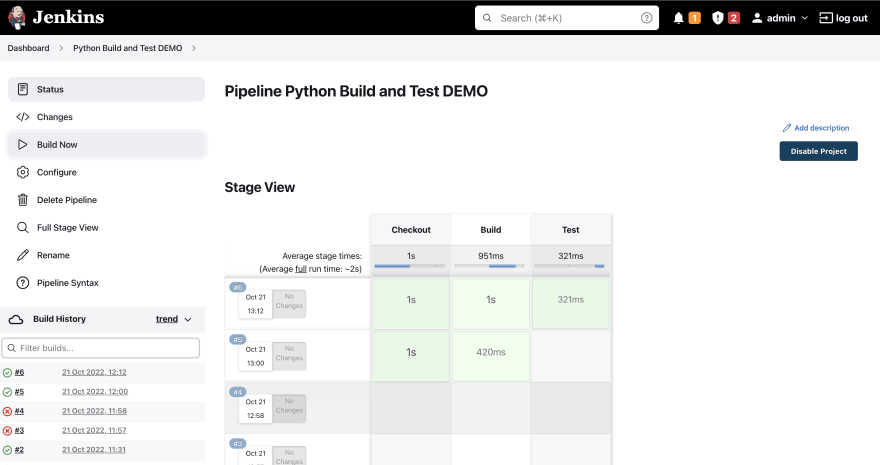 If not, please inspect the console to determine what is wrong and correct it.

Thank you for sticking around with me; I hope you found it useful.
Please provide feedback and reactions.

Miracle Olabode ®️💭
Miracle Olabode is a DevOps Engineer with a love for cloud and everything automation. He is a Google Cloud Champion Innovator, where he contributes to the cloud ecosystem through writing and training
10 of the coolest developer T-shirts from devshirt.club
#watercooler #codenewbie #career #writing
NodeJS with Kafka: Build Async Programs with ease
#node #docker #webdev #tutorial
Why I Decided to Invest in My Portfolio as a Junior Developer
#webdev #career #codenewbie #help

Once suspended, sava_dev will not be able to comment or publish posts until their suspension is removed.

Once unsuspended, sava_dev will be able to comment and publish posts again.

Once unpublished, all posts by sava_dev will become hidden and only accessible to themselves.

If sava_dev is not suspended, they can still re-publish their posts from their dashboard.

Once unpublished, this post will become invisible to the public and only accessible to Miracle Olabode ®️💭.

Thanks for keeping DEV Community 👩‍💻👨‍💻 safe. Here is what you can do to flag sava_dev:

Unflagging sava_dev will restore default visibility to their posts.