In this article, I'll talk about a set of summary statistics: measures of spread.

Spread is just what it sounds like - it describes how spread apart or close together the data points are. Just like measures of centre, there are a few different measures of spread. 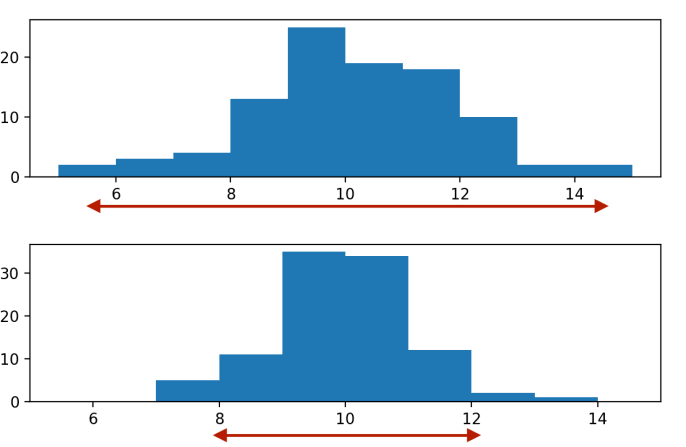 The first measure, variance, measures the average distance from each data point to the data's mean.

To calculate the variance:

So we get one number for every data point.

Finally, we divide the sum of squared distances by the number of data points minus 1, giving us the variance. The higher the variance, the more spread out the data is. It's important to note that the units of variance are squared, so in this case, it's 19-point-8 hours squared.
We can calculate the variance in one step using np.var, setting the** ddof** argument to 1.

If we don't specify ddof equals 1, a slightly different formula is used to calculate variance that should only be used on a full population, not a sample.

The standard deviation is another measure of spread, calculated by taking the square root of the variance. It can be calculated using np.std, just like np.var, we need to set ddof to 1. The nice thing about standard deviation is that the units are usually easier to understand since they're not squared. It's easier to wrap your head around 4.5 hours than 19.8 hours squared.

Mean absolute deviation takes the absolute value of the distances to the mean and then takes the mean of those differences. While this is similar to standard deviation, it's not exactly the same. Standard deviation squares distances, so longer distances are penalized more than shorter ones, while mean absolute deviation penalizes each distance equally. One isn't better than the other, but SD is more common than MAD.
Python
dists = msleep['sleep_total'] - mean(msleep$sleep_total)
np.mean(np.abs(dists))

Before we discuss the next measure of spread, let's quickly go through quantiles. Quantiles, also called percentiles, split up the data into some number of equal parts. Here, we call np.quantile, passing in the column of interest, followed by 0.5. This gives us 10.1 hours, so 50% of mammals in the dataset sleep less than 10.1 hours a day, and the other 50% sleep more than 10.1 hours, so this is exactly the same as the median. We can also pass in a list of numbers to get multiple quantiles at once. Here, we split the data into 4 equal parts. These are also called quartiles. This means that 25% of the data is between 1.9 and 7.85, another 25% is between 7.85 and 10.10, and so on. 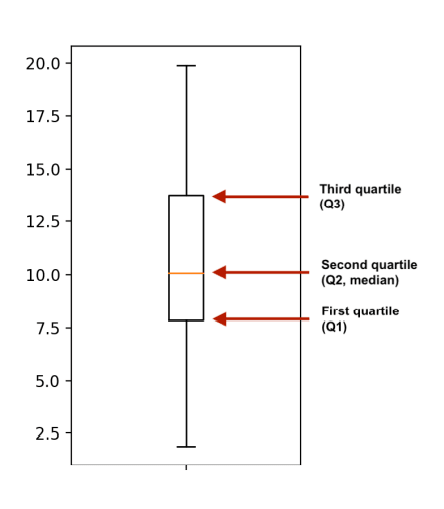 Here, we split the data into five equal pieces, but we can also use np.linspace as a shortcut, which takes in the starting number, the stopping number, and the number intervals. We can compute the same quantiles using np.linspace starting at zero, stopping at one, splitting into 5 different intervals.
Python
np.quantile(msleep['sleep_total'], [0, 0.2, 0.4, 0.6, 0.8, 1])

The interquartile range, or IQR, is another measure of spread. It's the distance between the 25th and 75th percentile, which is also the height of the box in a boxplot. We can calculate it using the quantile function, or using the IQR function from scipy.stats to get 5.9 hours.
Python
np.quantile(msleep['sleep_total'], 0.75) - np.quantile(msleep['sleep_total'], 0.25)

To find outliers, we'll start by calculating the IQR of the mammals' body weights. We can then calculate the lower and upper thresholds following the formulas from the previous slide. We can now subset the DataFrame to find mammals whose body weight is below or above the thresholds. There are eleven body weight outliers in this dataset, including the cow and the Asian elephant.
Python
from scipy.stats import iqr
iqr = iqr(msleep['bodywt'])
lower_threshold = np.quantile(msleep['bodywt'], 0.25) - 1.5 * iqr
upper_threshold = np.quantile(msleep['bodywt'], 0.75) + 1.5 * iqr

Many of the summary statistics we've covered so far can all be calculated in just one line of code using the .describe method, so it's convenient to use when you want to get a general sense of your data.
Python
msleep['bodywt'].describe()

Why I selected Elixir and Phoenix as my main stack

Once suspended, sabareh will not be able to comment or publish posts until their suspension is removed.

Once unsuspended, sabareh will be able to comment and publish posts again.

Once unpublished, all posts by sabareh will become hidden and only accessible to themselves.

If sabareh is not suspended, they can still re-publish their posts from their dashboard.

Once unpublished, this post will become invisible to the public and only accessible to Sabareh.

Thanks for keeping DEV Community 👩‍💻👨‍💻 safe. Here is what you can do to flag sabareh:

Unflagging sabareh will restore default visibility to their posts.