The first part of this article introduces you to Docker, monolithic and microservice architecture, virtual environment, and containers.

With this general knowledge of Docker and containers, it's time to jump right into running applications in containers.

If you're just getting started with Docker, you'll learn some practical Docker commands in this post that will let you pull and run a Docker image locally, start and stop a container, list all currently running containers, and debug containers.

This blog post also provides some background information that will clarify the precise difference between a container and a Docker image.

To get the most out of this post, ensure to practice each step to get a feel for working with applications in Docker.

The Difference Between Docker image and Container

Docker image is simply a file that represents a container. For example, when you package an application with all its dependencies and push it to DockerHub or your private registry, the file in the registry is an image that represents your container.

A container can be viewed as a "box". In this box is an application that is packaged with its dependencies needed to run the application.

This application has its distinct virtual environment- the hostname, disk, and IP address, which is managed by Docker. The application inside the box cannot have any interaction with the outside environment.

The box is called the container because it contains the application with its dependencies. Containers share the host operating system (OS), CPU, and memory.

A container is an instance of a Docker image and a running environment of an image.

To understand exactly the difference between container and image let's practice some commands.

This tutorial uses redis for illustration. You could choose to use a different image or container and it'll still work the same.

docker pull is used to download or pull an image from the repository to your local machine. To access an image locally you must pull it first.

let's pull a redis image from DockerHub to our local machine.

Search for Redis in the search bar and click on the image.

In your terminal, run the following command: docker pull redis

The image is pulled, downloaded, and extracted by Docker when you run the command.

Note: The latest tag is automatically pulled when you pull an image without specifying a tag. A tag is the same as a version.

To ensure that the image has been downloaded, run the following command in your terminal docker images. This will list all existing images.

In the above, there's just one image with the REPOSITORY-redis, TAG-latest, image ID, when it was CREATED, and SIZE of the application.

Note: You could specify a version or tag if you don't want Docker to download the default tag.

You could specify the image tag by running the command docker pull redis:10.1.
10.1 is the version specified. Remember the version is always followed after a semicolon.

Now, you need to get redis running to make it reachable by your application.

The run command is used to create a container of an image. The first time you use the run command, Docker informs you that the image doesn't exist locally so it'll search for it on DockerHub, pulls and starts the image.

If the image already exists locally, docker goes ahead to run a container of the image.

But if the image doesn't exist in DockerHub or your local machine, you'll get no error message from Docker.

In the above image, the docker run command starts the redis image in a container.

The -d is one of several docker run options. It is used to run a container in a detached mood.

The docker ps command lists all running containers. This command allows you to track your container’s progress. If you ever get an empty list from running the command, ensure that your container is running.

Note: You could use a separate terminal window to run the container and another for the docker ps command.

Several options could be used with the docker ps command such as -a, -f, -s, etc. For instance, the -a option lists all the exited and running containers. This allows you to track the status of a container. Run the command docker ps -a to view all your containers.

This image shows all containers in their current status.

Containers can be terminated by using the stop command. There are several reasons why you may want to stop a container.

An error or a crash might require you to stop a container. You'll need the ID of the container that you want to stop.
In your terminal run docker stop "Container ID"

Using this command, you can restart a stopped container. You can do this by running the docker start "container ID" command.

The container specified will be started with this command.

The next part of this blog post will walk you through the steps and basic commands of working with a running container. For your application to connect to the container, the container must be reachable.

To connect the container to your application, you'll need to bind the host port to the container’s port. The diagram below illustrates how host binding works. 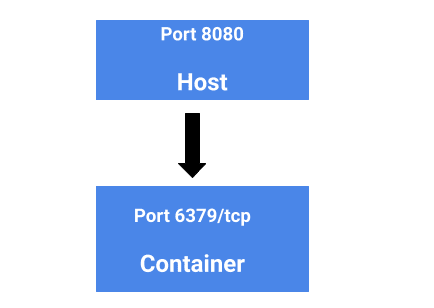 For instance, the port of the container below is 6379/tcp

The -p flag in the command means port.

Note: Before executing the command, make sure the container has been stopped.

To check that the host and the container's port have been connected, let's run the docker ps command.

You can look through a container's logs using this command. It is utilized to debug or troubleshoot containers.

Note: This command is only functional for containers that are started with the json-file or journald logging driver. -- Docker

The -it flag means interactive and indicates that you would like to assess the terminal inside the container.

If you want to clean up or remove containers or application packages after following the exercises, you can run this command: docker rm -f CONTAINER ID

In this blog post, you’ve practiced working with basic Docker commands such as pull, run – which pulls and launches an image, stop, start, logs, exec, rm, etc. You learned how to bind a host and container ports as well as the difference between container and Docker image.

In addition to the Docker commands that were covered in this article, there are many others that you might want to look into. If you'd like to learn more about the Docker command line, please use the link in the resource section.

How to Use the Docker command line

Once suspended, roselinebassey will not be able to comment or publish posts until their suspension is removed.

Once unsuspended, roselinebassey will be able to comment and publish posts again.

Once unpublished, all posts by roselinebassey will become hidden and only accessible to themselves.

If roselinebassey is not suspended, they can still re-publish their posts from their dashboard.

Once unpublished, this post will become invisible to the public and only accessible to Roseline Bassey.

Thanks for keeping DEV Community 👩‍💻👨‍💻 safe. Here is what you can do to flag roselinebassey:

Unflagging roselinebassey will restore default visibility to their posts.