This follows on from the post VS Code: You don't need that extension that I wrote last year.

There are builtin features and settings that ably do the work of many popular extensions. Perhaps, you do not need that extension!

Our remedies oft in ourselves do lie

1. Wrap selected HTML in a tag

Sometimes, you want to wrap a block of HTML with another element when you are refactoring your HTML. This is awkward to do manually. 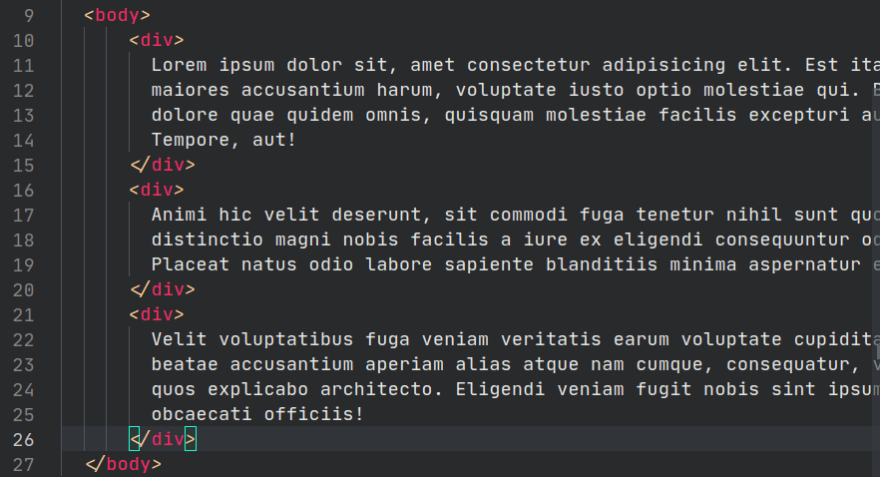 It would be nice to just select the block and run a command to wrap it with the main tags.

Emmet can do this for you. Select the code you want and run the command Emmet: wrap with abbreviation. You will be prompted for an abbreviation, you can just type the name of the tag you want. We just type "main" and hit enter.

If you wanted to wrap it with more than one tag and include a class, you can provide an Emmet abbreviation such as main>div.container, which will give you HTML like this:

Styling of matching brackets pairs can help with identification of scope in your code. In particular, it is very popular for people to color brackets depending on their nesting level.

Quite a few extensions have filled this role in some way or another.

VS Code introduced native bracket pair coloring in v1.6.0 (August 2021). It is much faster than any of the extensions listed. You can read the "Bracket pair colorization 10,000x faster" blog for a deep dive.

Bracket pair coloring can be enabled by setting editor.bracketPairColorization.enabled to true. 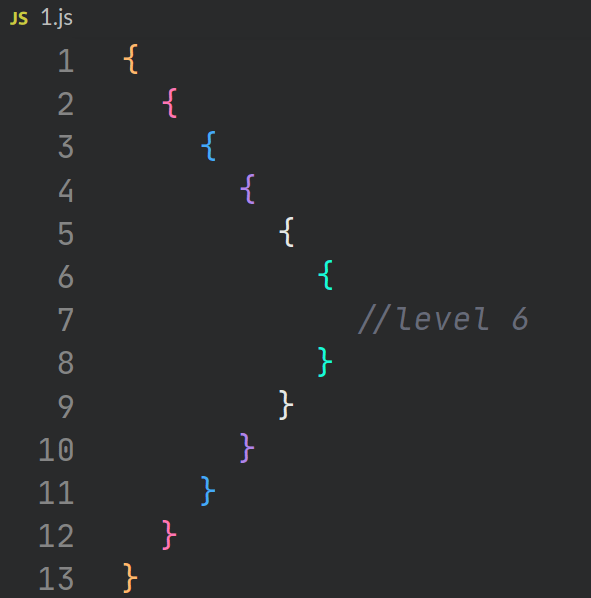 The bracket colors can be declared in a theme, or can be set through the setting workbench.colorCustomizations.

Some of the aforementioned extensions enable you to apply more styles to the brackets, such as underlining and borders, currently this is not possible with this feature. However, there is a possibility for this to be added in the future because the bracket pair algorithm identifies brackets as tokens similar to how syntax highlighting works. Time will tell if this is something that will be added.

Indentation guides are vertical lines that outline the blocks of your code. They can help guide your eye to see how your code structured. VS Code refers to them as "brackt pair guides".

Since v1.61 (September 2021), the editor supports colors for indentation guides. VS Code refers to them as "bracket pair guides". They use the same colors as the bracket pair coloring feature discussed above by default.

Bracket pair guides can be enabled by setting editor.guides.bracketPairs to true, it is set to to false by default. There is a third option active to only show the indent guide for the active block. This setting should be used instead of the deprecated editor.renderIndentGuides setting.

As you can see from the example below, the guides are quite muted by default. It looks like the colors are destaurated. 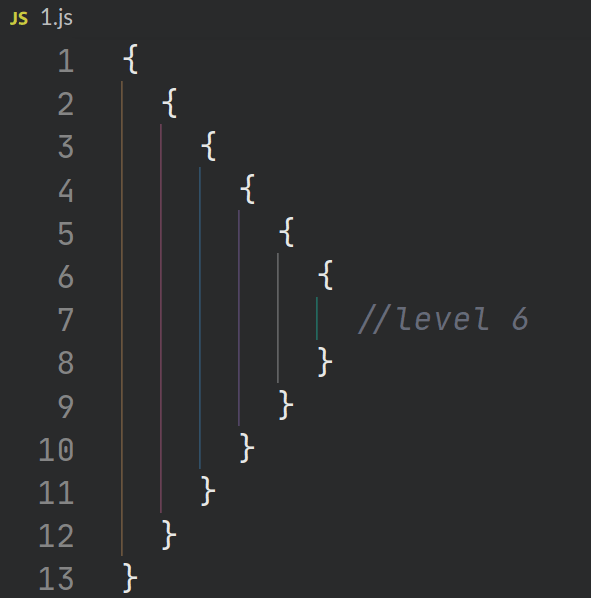 As you can see from the example below, the active indent guide is shown in a brighter (more saturated) color. 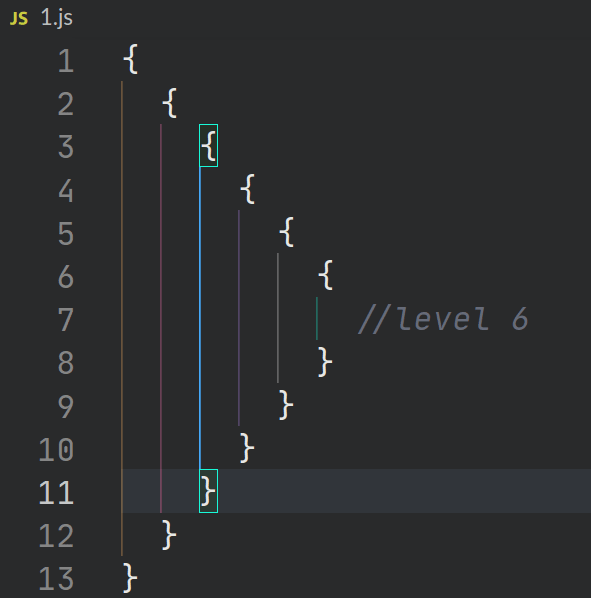 There is also a setting editor.guides.bracketPairsHorizontal that controls if and when to render horizontal lines when a line of code crosses into another indentation level. It defaults to active.

The relevent settings are:

4. Running and automating scripts (NPM, Gulp, Make, and others)

Most projects requires some tasks to be run like linting, testing, building, packaging, and deploying. Depending on the type of project it is, you may use different tools to handle this such as NPM, Grunt, Gulp, Make, and so on. While this is often something you do on the command-line, it can be handy to run some of these actions in the editor without switching context.

VS Code has a Tasks feature. Tasks can be configured to run scripts you want inside VS Code through the command palette, you can customise how they are run, you can add a keybinding to them, you can run multiple scripts in a sequence, and you can run them automatically when you open a workspace.

VS Code can autodetect scripts for Gulp, Grunt, Jake, and npm. You can also run shell scripts, however they are not autodetected.

I will show you briefly how you can run NPM scripts as tasks. VS Code picks them up from your package.json.

Pressing Ctrl+Shift+B or running the command Run Build Task will show you a picker of the autodetected tasks. For NPM, it narrows the list down for you:

Usually, the first option is the correct option.

You can run a task through the Tasks: Run Task command. It will show you a list of the autodetected tasks from your workspace, and any custom tasks you created.

If you want to be run a task for a particular tool, you can use Quick Open, by pressing Ctrl + P or through the menu File > Go to File, you type "task" and hit space, and then the dropdown will show you the options for the different tools.

For my JavaScript project I pick "npm" and I get a list of my npm scripts. 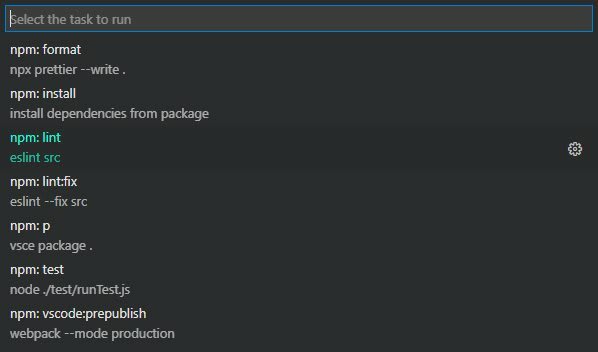 Pick one and it will run the script.

You can define custom tasks for your project in <project folder>/.vscode/tasks.json. You can create the file yourself, or you can run the Tasks: Configure Task command to build a template file for you by picking the option Create task.json file from template.

Adding a shortcut for a task

If you run a task frequently, you can define a keyboard shortcut for the task.

For example, to bind Ctrl+R to the my dev server task, I could add the following to the keybindings.json file:

The args property should match the value of the label property from the tasks.json.

You can read the user guide on Tasks to learn more about tasks.

If you use many different languages, you will need some type of extension for formatting, but along the way you still may be using an extension that you actually don't need. It is not as cut and dry as the other items I have discussed, it is dependent on the particular languages you use. Let's get into it more specifically.

VS Code has builtin formatters for HTML, JavaScript, TypeScript, and JSON. This is a decent basis for frontend developers and JavaScript-oriented backend developers.

You may be wondering why CSS and CSS-like syntaxes are not on this list, I don't know why. What i do know is that the VS Code team does not plan to add one in the future. Like other languages that are not in this list, you will need an extension to provide formatting for that language. While it is tempting, particularly as a frontend developer, just to install Prettier because it covers a number of languages out of the box, there are tradeoffs with this. I will discuss this in the "Other languages" section below.

Settings for languages with builtin formatters

To use the builtin formatters, you can add the following settings:

I tried these out for a while and was pleasantly surprised. VS Code uses js-beautify under the hood, which is also used by the Beautify extension. So, you can expect similar results to that extension. Your mileage may vary for the formating of JSONC, it is asking the JSON Language Features extension to deal with "illegal" comments, but it appears to manage it without issues. I don't use React, so I can't comment how well React is formatted.

You cannot include a .jsbeautifyrc file in a project to control the formatting. However, there are equivalent formatting settings available. You will find formatting settings for each language with the naming convention of "<language-name>.format.<property-name>". Here are a few examples:

There is an overview of the HTML formatting settings in the docs if you want to delve deeper.

The tricky thing with formatters is that they involve considerable work to maintain, it is mosty left to independent devs to create the extensions to fill the gaps. Realistically, people are not able to maintain these as side projects, so the quality varies depending on how popular a language is. This is a weak spot for VS Code.

For other languages, you have a few different options:

If you are a frontend developer, the big omission from the list of builtin formatters is for CSS and CSS-like syntaxes. The options for this are:

For backend languages, you will find that most language support extensions are also formatters. You need to try them out to see if they are satisfactory. Of course, you could choose to use a linter to cover the formatting duties for you for these languages too.

Before you reach for an extension, see if VS Code can do it already. It sounds like an obvious move, but we are all probably guilty of doing it at one time or another. VS Code is adding features regularly, so it is worth checking the changelog every so often.

How to Create a Style Guide as a Technical Writer

5 Ways To Stay Motivated As A Developer