With process synchronization out of the way, it’s time to look into distributed system synchronization—specifically distributed mutual exclusion using logical clocks. Once again, the purpose of this article is to further solidify my understanding of the concept before my PhD qualifying exam.

Up to this point, mutual exclusion was something that we were able to accomplish between processes on the same machine. In other words, these processes shared the same hardware and operating system, so we only had to worry about navigating that environment.

Sometimes processes on these networks need to share data just like processes do on the same machine. Naturally, the question becomes: “how do we protect those critical sections?” In this article, we’ll be looking at logical clocks as a mechanism for synchronizing distributed systems

Once again, the material for this article was borrowed from the lecture notes for the CSE 6431 course at The Ohio State University. Feel free to browse the slides below:

As always, all writing is my own.

One way to synchronize distributed systems is to impose a clock on that system much like the way we handle processors today. Of course, it’s never really that simple.

Normally, when we want to share information with somebody, we’re bound by the distance between us and that person. For example, if the person is close, we might be able to communicate with them directly. However, if they’re further away, we might opt for a phone call or even a text message. And if they’re somewhere remote, we may even decide to send a letter.

If for some reason, we had to send information that was time-sensitive (i.e. let’s meet in town on the 3rd), they may not get our letter in time. Even if they do get the letter in time, we may not receive their response in time (i.e. they can’t make it).

Of course, one solution is to make plans so far into the future that there’s no risk of either message not making it in time. Sadly, there are still potential problems. For example, something may prohibit our friend from making their commitment, and they may not find out until it’s too late to warn us. Luckily, we don’t really have to deal with these sort of problems as much, but they still exist in distributed systems.

What I’ve just described is similar to how a distributed system would work with a global clock. In other words, processes would make decisions on the assumption that all processes were aware of the current time. Of course, the assumption cannot possibly be true because messages have unpredictable delay. As a result, a process can end up corrupting shared memory because its local clock is too fast or too slow.

Instead of dealing with timestamps, we can start thinking about interactions between machines as events. For example, take a look at the following pseudocode:

In this example, we have two shared memory variables (x and y) which we interact with in some order:

In this example, we don’t care about the actual time that these events occur. We only care about their order because their order determines the result. In particular, swapping lines can give the shared variables dramatically different values. More specifically, writing to x has to “happen before” we can read from it to increment it.

In distributed systems, we can take this idea of happens-before to a new level. In particular, when two process exchange messages, one process has to send a message before another process can receive that message. As a result, we can start reasoning about a logical ordering to the events in a distributed systems.

To go one step further, the happens-before relation is transitive. If some event a happens before some other event b and b happens before some third event c, then a must happen before c. With that property in mind, we can start synchronizing events.

Interestingly enough, the happens-before relationship is pretty simple to implement. All we have to do is have each process (Pi) track their own events with a timestamp using the following rules:

In other words, processes maintain their own clocks and only update them if they receive a message with a higher timestamp. Below is an example of this algorithm in action: 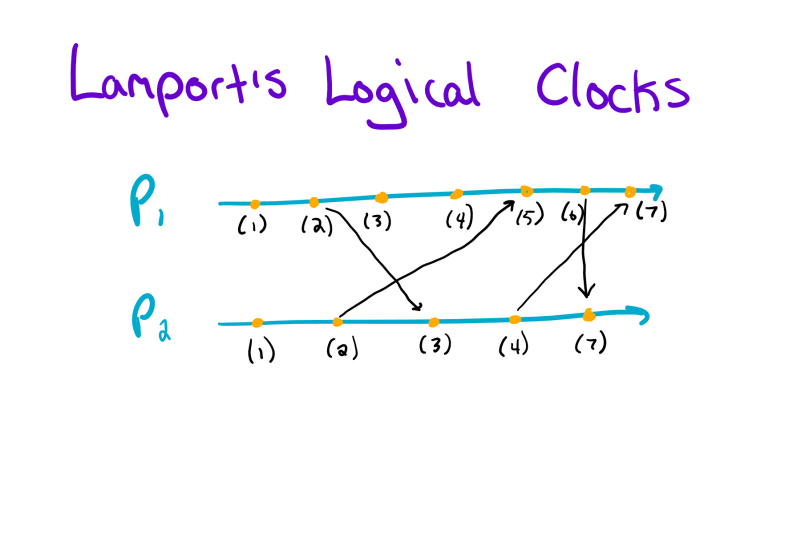 In this example, we have two processes: P1 and P2. Each process is denoted by a line which points off infinitely to the right. On each line, we’ll notice several orange dots. These dots denote events, and we mark each one with a timestamp according to the Lamport’s Logical Clock algorithm.

Occasionally, we’ll notice an arrow between processes. These arrows indicate messages passed between processes. According to our algorithm, message senders attach their current timestamp to their messages, so message receivers can update their local clock if necessary. See if you notice any places where a process had to update its clock.

Like Lamport’s Logical Clocks, Vector Clocks work using the happens-before relation. However, instead of tracking a single local clock, Vector Clocks track all the clocks of all processes. Of course, we don’t want to introduce a global clock, so each process maintains its own clock as well as its best guess of all other clocks. In particular, Vector Clocks use the following rules:

Naturally, definitions can be hard to digest, so let’s take a look at another example borrowed from the slides: 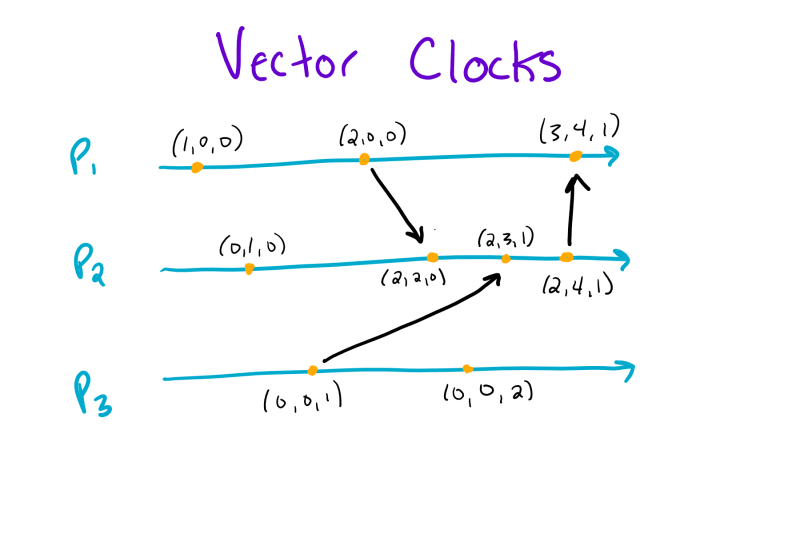 With the concept of logical clocks in mind, we can start looking at better ways of applying mutual exclusion in distributed systems. In particular, we’ll take a high-level look at three algorithms: Lamport, Ricart-Agrawala, and Maekawa.

Before we get into that, I do want to mention that there’s sort of an obvious way to provide mutual exclusion at this point, right? Instead of having some complex asynchronous process handle the critical section problem, we could provide some centralized site which grants permission to processes which want to enter their critical sections. In the following sections, we’ll look at why that may not be the best course of action.

Instead of providing a centralized site, what if we developed some message passing scheme, so all processes would end up agreeing to take turns accessing their critical sections. Well, that’s exactly how the Lamport algorithm works.

From their, a requesting process only enters its critical section when it has received replies with timestamps greater than its current time from all other processes AND it’s first in its queue.

After processing its critical section, the process removes its request of its queue and sends out a RELEASE message to all other processes. When receiving a RELEASE message, each process will then remove the releasing process’s request from its queue.

As always, it’s much easier to look at a picture, so here’s the algorithm in action: 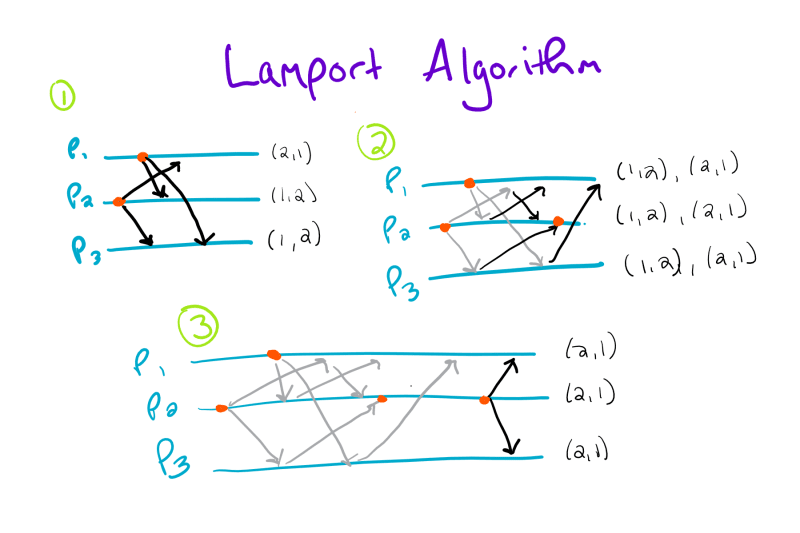 Each step shows the phases that the algorithm goes through. For example, step 1 shows the REQUEST message being sent out for processes one and two. Then, in step 2, the replies are sent. At which point, process two enters its critical section. Finally, in step 3, process two sends a pair of RELEASE messages, so process one can start executing.

Sadly, the main issue with the Lamport algorithm is its dependence on First-In-First-Out (FIFO) communication. In other words, the difference in transmission delays between processes can result in a destruction of mutual exclusion.

For example, imagine we have a two process distributed system. What happens if a process with an empty queue sends a request and receives a response? It should start executing, right? Well, as it turns out, it’s possible that the process that sent the reply happened to have sent a request earlier. Yet, somehow the reply beat the request to the other process. As a result, both processes may end up in their critical section.

Unfortunately, the Lamport algorithm has a couple drawbacks. For one, it assumes FIFO which isn’t realistic. In addition, there’s a lot of unnecessary message passing, and the algorithm relies on queues. Thankfully, the Ricart-Agrawala algorithm offers a few slight improvements over the previous algorithm.

As always, its helpful to look at an example to really grasp this algorithm: 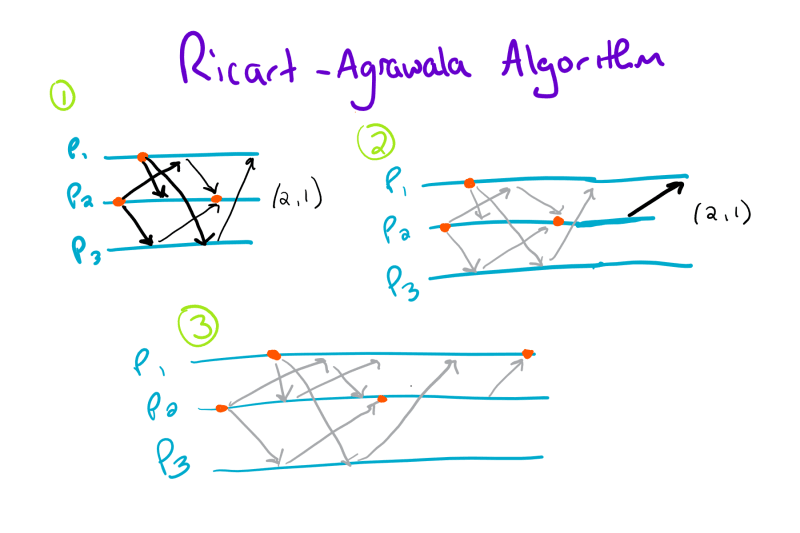 As we can see, there are a few less messages than the Lamport algorithm. In particular, we can compress steps one and two of the previous algorithm and eliminate a few messages in the process. In addition, the only queues we have to maintain are the deferred queues.

Due to the nature of this algorithm, there’s no FIFO restriction. That’s because each process is personally responsible for granting permission. Even with out of order messages due to transmission delays, the REPLY message will never come thanks to the logical clocks.

Normally, when a process wants to access its critical section, it blasts requests off to every other process in the distributed system. Of course, waiting on every process to reply can take time, so reducing the total number of messages that the process has to send can be a major performance boost.

Unlike the Lamport and Ricart-Agrawala algorithms, the Maekawa algorithm introduces request sets which are groups of processes with some special properties. In particular, each pair of request sets share at least one process.

While the algorithm alone is pretty simple, there are actually a lot of rules around setting up the request sets. For example, we already mentioned that every two sets should have at least one overlapping process. In addition, it’s a good idea to make sure all request sets are the same size and that each process appears an equal number of times across all sets. In other words, request sets should have a fixed size (K) and process should only be in a fixed number of sets (also K).

Apparently, the conditions above can be met using the following equation:

In this equation, N is the number of processes and K is the size of each request site. For example, N = 7 and K = 3 would be a valid structure, and it might look like the following: 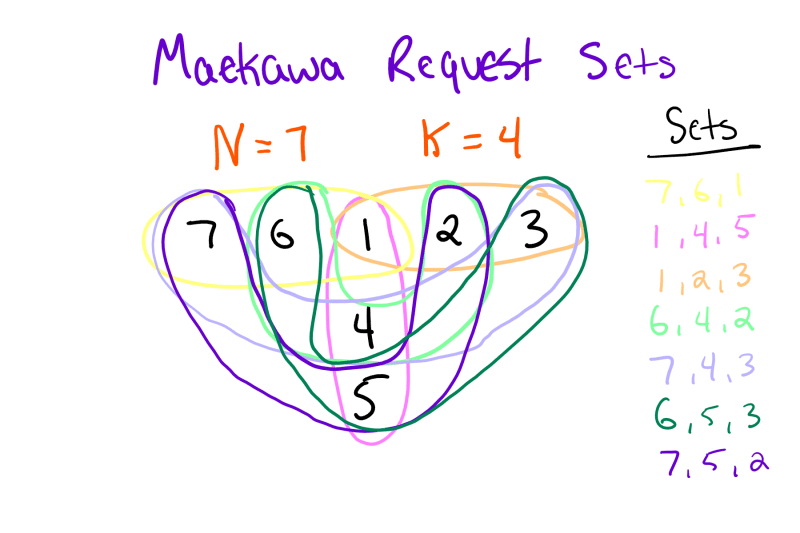 All that said, there’s a major caveat with this algorithm: it’s deadlock prone. After all, since pairs of sites deal with conflicts, it’s possible to have a cycle of conflicts between a handful of request sites.

So far, we’ve mostly covered operating systems topics, and we’re only about halfway through. After this, there are about three more topics to cover: database concurrency control, deadlocks, and fault tolerance.

In terms of a timeline, finishing operating systems will bring me right up until two weeks before the exam. After that, I’ll start digging into the other two courses. Obviously, most of those articles won’t get published until I’ve already taken the exam, but I think they’ll still provide a lot of value to me.

At any rate, if you would like to support me in this journey, make sure to become a member. If you’re strapped for cash, you can always hop on the mailing list where you’ll receive updates every Friday.

While you’re here, why not take a look at some the following articles?

Once again, thanks for your support!