In this article, we’ll explore the current state of design tools and the design process overall, and offer my personal picks of the five best ui design tools on the market now.

Design handoff involves handing over a UI design to a developer who will code it up. Before “design handoff” was even a term, handing over designs was a complicated, frustrating, and often disastrous task.

These days, there’s an abundance of UI tools sporting design handoff features and even tools that are solely dedicated to handoff, and which help designers and developers translate design to code, house design files, maintain consistency between design elements, and facilitate good designer-developer collaboration.

Modernized designers and developers recognize the design handoff process as a key development process, whether building a design system or a product from scratch. In fact, UI design tools such as Figma offer handoff and design system features side by side.

What Do UI Design Tools Actually Do?

Without design handoff, developers are left with only one alternative: guessing. Guessing often results in visual and functional inaccuracies — such as the wrong colors being used or interactions behaving oddly. In turn, this impacts the user’s experience and sends designers into a nuclear meltdown.

Let’s take a look at five of the best UI Design tools.

Figma translates design styles to CSS (for web), Swift (for iOS/macOS/iPadOS), and XML (for Android).

Alternative UI Design tools can be installed as Figma Plugins for when designs need to be translated to Sass, Less, Stylus, React Native code, and more.

Image assets can be exported or copied to the clipboard in SVG or PNG format, all at once or singularly, in any resolution.

If collaborators have something to say (or ask) about the design, they can communicate clearly and openly using contextual comments, which aids collaboration and ensures that everybody is on board with how the design should look, feel, and function.

Figma is not only the most used tool for UI design & handoff, but also for user flows, user interfaces, interactive prototypes, design systems, and version control.

All in all, I would choose Figma (as most teams do) until I needed to hand off designs using an unsupported code language, in which case Zeplin makes a more-than-ideal secondary option. 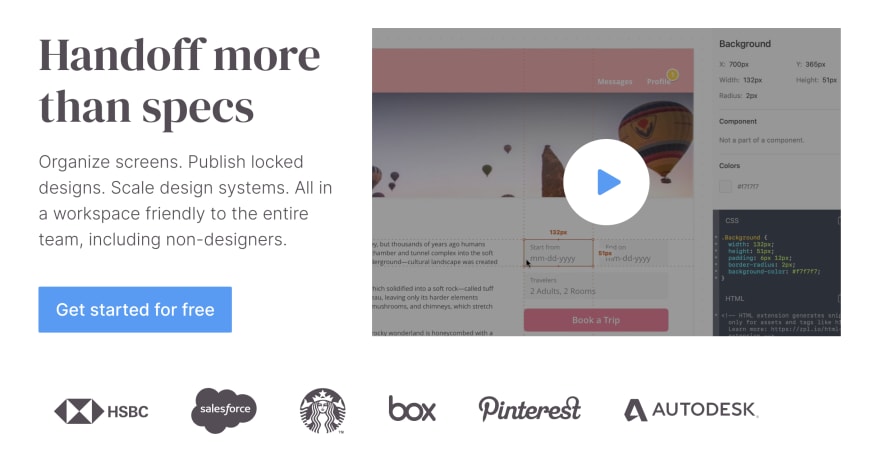 Zeplin supports more code languages than Figma does (React Native, Sass, Less, Stylus, etc., in addition to the standard Swift, XML, and CSS). It’s also cheaper than Figma-like tools, though this is because Figma-like tools are multi-functional and cover much more of the UI design workflow.

In order to use Zeplin, you’ll need to create designs using Photoshop, Adobe XD, Sketch, or Figma first, so it’s totally understandable that some designers would rather keep their UI design workflow contained to a single tool, and this is likely why Figma is used more often than Zeplin for handoff.

Functionality-wise, Zeplin does everything you’d expect a UI Design tool to do (and does it fairly well). It exports image assets as a variety of formats and in various resolutions, translates design styles to code, and facilitates communication.

InVision Studio (InVision’s UI design tool) is where you’ll very likely be creating your designs before handing them off to developers. Studio is available to macOS and Windows users.

InVision is the third most used tool for design handoff and a still a commonly used tool overall. While it does seem to be on the decline, with solid competition eating at its slice of the market, it’s been quiet lately.

Adobe XD is a solid contender on this list, with no strong downsides. In fact, if you’re already familiar with the Adobe ecosystem, Adobe XD might be the best choice, especially if you have an Adobe Creative Cloud subscription already (in which case you might have access to Adobe XD).

It offers the same functionality as Figma for less money. However, since we’re talking about design handoff here, it’s worth noting that Adobe XD only translates styles to CSS. But it includes the usual features (format switching, asset exporting, content extraction).

All in all, if you only require design handoff to CSS and/or you’re familiar with the Adobe ecosystem already, Adobe XD is a decent choice.

Along the lines of Figma and Adobe XD, Sketch is another multi-functional design tool that can facilitate most of the UI design workflow, including design handoff. Unfortunately, though, Sketch only supports translating design styles to CSS (like Adobe XD).

Another downside to Sketch is that its core app only supports Mac users, although, since design handoff works via a shareable URL, this shouldn’t be of any concern to developers (but something to consider if your team has multiple designers).

Overall, Sketch isn’t the best, but it’s not bad either. It remains in the top five because designers love its user experience.

Judging from the design handoff tools on this list, it’s clear that designers would rather contain their UI design workflow to a single ecosystem — or even better, a single tool.

Paying more for Figma, which covers the entire UI design workflow (design handoff included) not only within a single ecosystem but a single tool/interface, is certainly worth it.

Ultimately, design and development teams should be looking for something that smooths designer–developer collaboration, so it’s worth trying out two or three options to see what works best for you and the other stakeholders involved in designer–developer handoff.

Once suspended, rembertdesigns will not be able to comment or publish posts until their suspension is removed.

Once unsuspended, rembertdesigns will be able to comment and publish posts again.

Once unpublished, all posts by rembertdesigns will become hidden and only accessible to themselves.

If rembertdesigns is not suspended, they can still re-publish their posts from their dashboard.

Once unpublished, this post will become invisible to the public and only accessible to Richard Rembert.

Thanks for keeping DEV Community 👩‍💻👨‍💻 safe. Here is what you can do to flag rembertdesigns:

Unflagging rembertdesigns will restore default visibility to their posts.