My Introduction to Django

I have been itching to learn something new lately so I decided to give Django a try. I have heard a lot about Python and Django but I hadn't yet delved into it. I will show you how I created a simple Django wordcount app.

First, you need to see if you have Django installed on your computer. To do this I just decided to run the command to install Django which is pip3 install django and I received
this: Requirement already satisfied: django==2.0.2 in /usr/local/lib/python3.9/site-packages (2.0.2) so it looks like I already have it installed, if you don't have it installed, this command will get it installed for you. 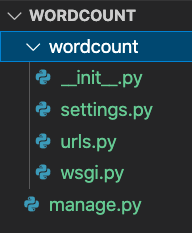 To verify everything went well when you created your new project, you can run the server by running python3 manage.py runserver you should get a response like this

If you have ever run a server before this should look familiar, just go to this URL, and if you see the Django homepage you are good to go!

A template contains the static parts of the desired HTML output as well as some special syntax describing how dynamic content will be inserted.

Create a new folder in the top level of your directory named templates and within that folder create a file named home.html within that file <h1>HELLO</h1> Once you have done that you will need to create another file named views.py
in this file, we need to tell Django what template we want to render. That code should look something like this:

This tells Django that when we visit the homepage we should render the home.html template. Next, navigate to settings.py and find TEMPLATES and then DIRS and add 'templates' that should look like this:

Finally, navigate to urls.py and urlpatterns and modify it like so:

For those of you that are familiar with rails, this is kind of like setting up your routes.rb file. Now let's fire up the server python3 manage.py runserver and you should see your home.html file rendered.

I then created a count.html file in the templates directory that will be responsible for rendering the HTML on the count page. Perhaps first we should navigate to our views.py file and configure the count view. I will create a new view called count and in that view, I will grab the value of fulltext which is the name of the Textarea field. Next, in order to count each word in the text area box we will split the fulltext and add that to our return.

That's it, you should now have a working Django wordcount app. I come from a Ruby background and I can see some similarities between Python/Django and Ruby/Rails. Some examples are the code in views.py looks a lot like a Ruby method without the end the urls.py is similar to config/routes.rb and of course the html files are similar to the views in Rails. Overall I think Django has been pretty simple to get started with and I could definitely see myself using it more often.

Learn more about Django here and go build something fun!
Feel free to check out the repo here