Objects are a fundamental block for creating application state. Therefore, it's essential to understand how they work and what their manipulation strategies are.

Note: This article makes assumptions based on the way objects are handled in Javascript. Programming languages differ slightly on the topic, but many of the concepts covered below can be applied to your language of choice.

Our programs need to store, read and possibly modify data while running. Hence, there's a need to reach previously defined values in our code for later use. With Javascript, that can be done with variables:

Let's use a simplified analogy to represent what's going on under the hood. There are 2 tables of correspondence:

💡 Memory address indexes do not necessarily have a pattern.

See those memory address codes in the table (001, 043, 012)? We will call them References from now on. They're the physical address in memory where values are being stored.

Important: References are NOT variable names. Rather, variable names are pointing to a reference. That's an important distinction we have to make in order to understand the next concepts.

In order to read some variable (for example, age), the program will obtain its specific memory address (reference), and then its value:

Think about creating a payment check to someone. Once we are done writing it, we expect it to remain unchanged. That's the reason we use pens (no removals) and cross-out void spaces (no additions).

What if the check had been misspelled?

In that case, it's a better idea to write a new check instead of overwriting the current one, shred the current check and throw it away in the garbage.

We are about to see that Immutability is also used in many programming scenarios, often due to the same reason (guaranteeing consistency).

a primitive (primitive value, primitive data type) is data that is not an object and has no methods.

We can consider Primitives one the lowest building blocks in the language. It's important to note that they have no methods.

I can call .toString() on a number, doesn't that mean it has properties/methods?

Not really. Javascript applies Autoboxing to primitives. One quick way to check this is to try creating a new property in the number:

If they did have properties, previousNumber would have been saved in the example above.

One important characteristic of primitives is that they do not allow for modifications after they are created.

Primitives are written with pens.

What does Immutable mean in programming terms, though? Going back to our memory analogy:

The value inside Reference 047 is immutable. It cannot be altered anymore. So how to change the value for myCoolPrimitive?

The reference has been updated to a new string.

Let's also use an example with 2 variables this time:

Only the targeted variable (secondPrimitive) will change its value.

If some value is not a primitive, then it is an object.

Examples of objects include (but are not limited to): {}, [], Function, Date, HTMLElement, Set, Map, etc.

Objects are written with pencils

Unlike primitives, one can create an object and modify its properties later. That's mutable behavior, let's see an example:

It's also possible to "nest" objects. 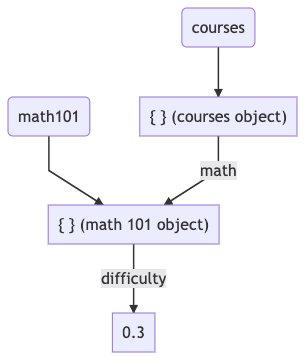 It's possible to reference one object to itself as a property.

It's also possible to reference 2 or more objects in a circular way. 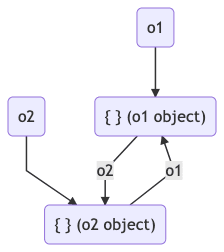 An Object Tree is a specific type of object that contains child objects where:

This is a valid example of an Object Tree 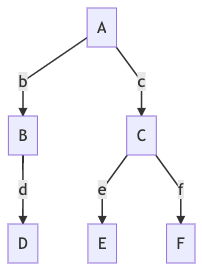 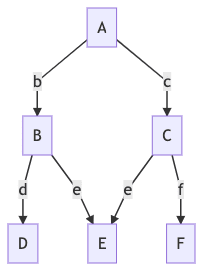 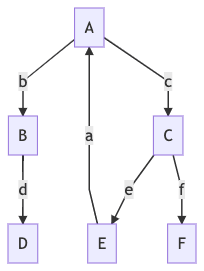 You may have noticed in our examples that values can stay in memory even after they're not being used by any other variables (or objects). Fortunately Javascript comes with a Garbage Collector, which periodically wipes away unreachable values automatically, so we don't have to worry about explicitly deleting them from memory:

After Garbage Collection, Address 001 should be released:

Garbage Collection is dependent on the environment's implementation (Browser, Node.js, etc), but generally uses the "Mark-and-sweep Algorithm", according to this MDN Article about Memory Management

NOTE: As a rule of thumb, use Triple Equals Operator (===) when possible instead of (==). See why here

In Javascript, the equals operator works differently for primitives and non-primitives:

When comparing 2 variables with ===:

Comparing 2 objects deeply (by their content instead of reference) is often not desired since it can be computationally expensive and unpredictable (depends on the depth and key length of the objects). That being said, in extreme cases it's recommended to use some library method, for example Lodash's isEqual function

Sharing the same object is a performance improvement (less memory is allocated). But there are times when you need independent copies. One example is extending from a base object.
In order to create Immutable objects, We can use spread operators for Arrays ([...]) and Objects ({...})

💡 Remember: The new object should behave as "read-only" after being cloned and applied the desired changes. If subsequent changes are needed, a new immutable object should be created. This will guarantee the object consistency promised by the immutable strategy.

By creating different references, we can be sure that the baseCar will not be altered when there is a change in fancyCar. This avoids side-effects in our code.

By using the concept of Immutable objects we can better integrate our code with features like:

Updating a nested object Immutably is relatively simple when your Object structure is a Tree. All we have to do is use the spread syntax in all the levels preceding the property.

Let's update obj.a.b.c immutably to false in the example below:

The resulting object contains all properties defined in obj, with the update on obj.a.b.c = true. Notice only the changed objects have been cloned, so we can still use reference equals operator for unchanged properties:

This is great for both cloning and equality check performance.

These questions are harder to answer and will be covered in the next part of our series. Thanks for reading and stay tuned for the following chapters :)