I know, I know, there are a lot of mini-tutorials, cheatsheets, and howto's about Git, but some of those are really crazy! I can't see how a beginner that gives Git a try would start learning first about cherry-pick and commit amends or whatever. So, presuming that you know Git as a version control system (if not, just watch this 12min intro from Telusko), but you never started using CLI commands, I'll write here some notes that got me going into using Git in all my personal projects!

Display help (all commands) in CLI:

Git help used on commands will display the help info in a new Browser tab (Chrome/Firefox/Edge etc). This will be really handy to understand all those parameters used in various commands.

Git keeps track of modified/added/removed files and also which files are [are not] tracked.
However, sometimes you don't want to track some files (eg. personal files, personal configurations files, cache files auto-generated after each build) => create .gitignore file where you can write the files you don't want to include (ignore them forever):

^^ These files won't show up anymore when calling git status.
Also, .gitignore should be included (git add .gitignore) to prevent a team collaborating on a project from committing generated cache files => don't add .gitignore to .gitignore itself lol.

Git diff shows the changes made to the code within modified files (git status shows only which files have been modified/created).

To add a remote:

OBS: When cloning a remote (a GitHub repository) with git clone, a remote named "origin" will be available by default.

Get (locally) the last state (last changes/updates) of the project if someone made changes on the global repository (the remote to github.com server):

If this error occurs when pulling: "your local changes to the following files would be overwritten by merge" and you want to drop/overwrite all the changes made from the local repository and get the latest updates from the global repository, use:

Or, discard/give up all the changes (modified files) and go back to the last (local) commit state of files:

NOTE1: git checkout HEAD^ filename (will overwrite the file to the state of commit before last local commit in the master branch)

NOTE2: git checkout HEAD^ without specifying a file will DROP THE WHOLE LAST COMMIT!!! and will revert to the commit before last commit (however you will be in a detached head state branch, so you can revert this action by just changing back to the master branch: git checkout master)

NOTE3: git checkout HEAD^1 is roughly the same as git reset HEAD^1, but: 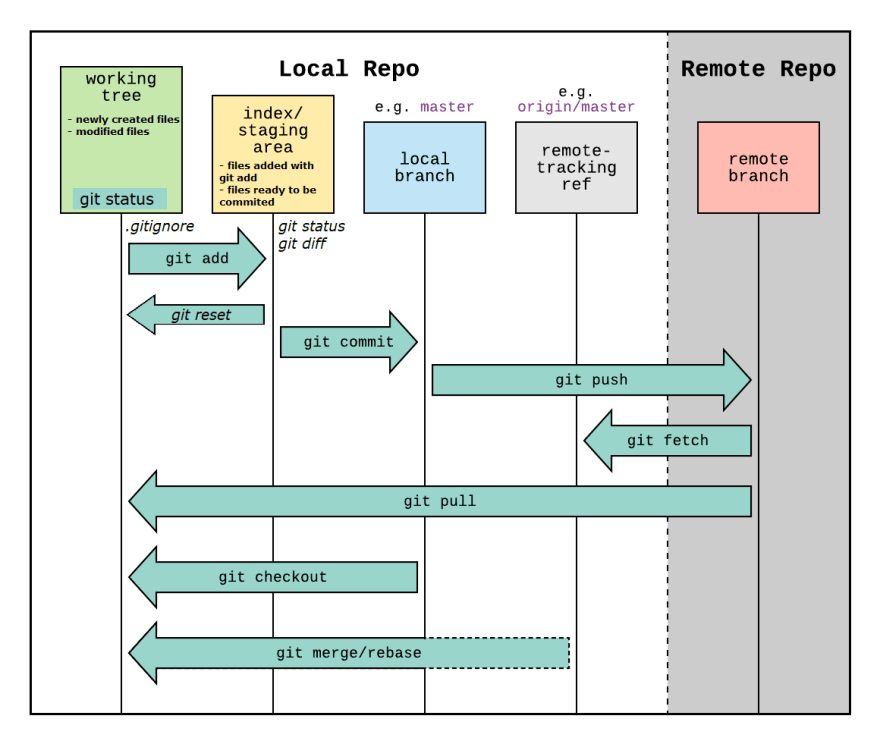 Create a new branch from CLI

Show all branches/active branch with:

Locally Mistakes that could've been made

If we made changes to a single_file but then we don't want to keep the changes to that file anymore (we want to undo/go back):

And if we want to discard all changes/modifications to our files:

Also, if we want to delete/get rid of untracked files (newly created files):

We mess up a commit -m message. We want to modify the last commit message without doing another commit

WARNING: The following commands in this section will change the hash of previous commits => THIS WILL CHANGE GIT HISTORY => IF OTHER PEOPLE WILL PULL THE CHANGES AFTER EXECUTING THESE COMMANDS, THE CHANGED HISTORY COULD CAUSE BIG PROBLEMS TO THEIR REPOSITORIES. We can only change git history when we're the only one owners of the repository.

We forgot to add a file to the last commit. We want the add the file without committing again.

WARNING: Again, this will change git history and will cause consequences when working in a team!!! I'll write some alternatives in the next sections.

Git soft reset will set us back to the specified commit BUT will keep the modified and new files from the unwanted commits (the ones we removed) in the staging area ("added files ready to be committed" area) - we still didn't lose our work, but we can discard with git reset HEAD -- ..

Git mixed/default reset will set us back to the specified commit BUT will keep the modified and new files from the unwanted commits (the ones we removed) in the working directory ("untracked files, before executing add -A" area) - we still didn't lose our work, but we can discard with git checkout -- ..

However, a hard reset will not affect untracked files (newly created files from the unwanted commits, but it's irrelevant if we didn't create any new files). We can get rid of these untracked files with git clean -fd.

NOTE: git clean -fd could be useful when we accidentally unzip an archive in a project directory (local repo) and we don't want to manually delete all the new files created.

Fatal: We did a hard reset on some changes but we realized that we actually need them: git reflog (or we deleted last commits)

This "fix" works if we screwed up with git checkout HEAD^1 or git reset --hard HEAD^. (HEAD^ is short for/same with HEAD^1).

Undoing a commit after pushing to remote server. Fix without changing the git history

Undo a commit (when other people already pulled the changes), without rewriting the git history. We use git revert to create a new commit on top that reverses the changes of earlier commits.

Useful for changes that you are not ready to commit yet, but you need to switch branches (or revert back to another code) work temporarily in another part of the project.
NOTE: If you don't commit your changes (modified files) and you switch to another branch, your code will be lost.

NOTE: You can't merge two stashes (eg. git stash pop twice) -> will show Error: files would be overwritten by merge, please commit your changes or stash them before you merge.

NOTE: The same stash list is accessible to every branch => Useful scenario: If you've written all your changes to code in a wrong branch (master) you need to commit to another branch, just stash the changes git stash save "Worked on login function", git checkout another_branch, then grab changes from the stack (stash apply stash@{?}/stash pop).

Credits / Notes taken from these tutorials (which I highly recommend for more in-depth explanations):