In recent years, Docker has been becoming more and more popular tool used to deploy web applications. According to Datadog in 2018, the adoption of Docker in large organizations reached about 47 percent and almost 20 percent in small organizations. This report it two years old - no doubt Docker is even more common now.

In my opinion, knowing Docker basics is an essential tool in the toolbox of every software engineer, especially in the web development ecosystem. In this article, I'll demonstrate the easiest way to Dockerize and deploy a simple application. Before we dive deep into practical steps, let's first answer two essential questions - "What is Docker" and "Why should I use it" in the first place.

Docker in a nutshell

Docker is a tool that makes it easy to build and deploy your applications, typically to the cloud environment. It allows you to package your application in a container that contains your app with all of the things it needs, such as libraries and other dependencies. Then, this package can be run on any machine with a Docker engine installed, no matter the underlying configuration or system distribution.

Why should I use Docker?

It works on my machine sentence has become a meme in the software world. You can even get a sticker on your laptop: 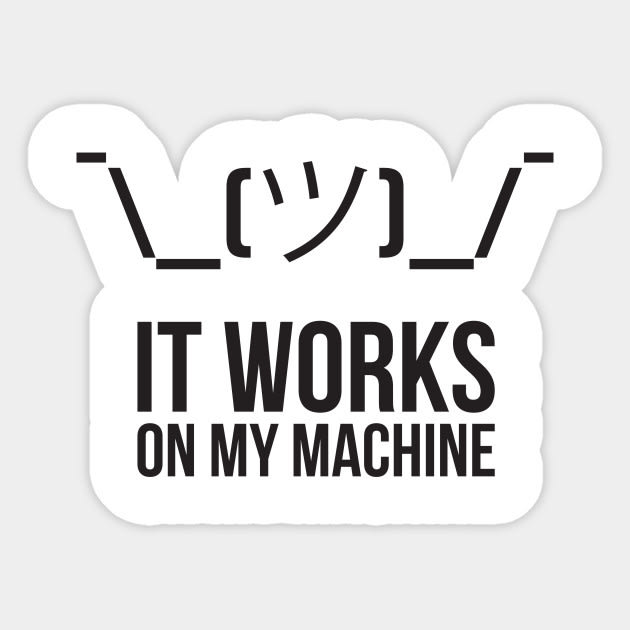 Making applications run consistently in various environments is one of the issues addressed very well by Docker.

Docker makes sure that your containerized applications run in the same way on your machine, on your friend's machine, and on the AWS server (and anywhere else where Docker engine is installed). It is truly a superpower. As a developer, you no longer need to worry about the underlying system. After you Dockerize your app, you can be sure that it behaves in the same manner in your development, testing, and production environments, as well as on your local machine. It makes building and testing applications way more comfortable than it was before.

Another reason why you should be interested in Docker is the popularization of cloud, microservices, and Kubernetes. Docker is the first-class citizen in the cloud-native world, so if you want to take the full advantage of scalable, cloud-native application architectures, Docker is the way to go.

How to deploy Docker containers

Let's move on to the practical application and usage of Docker. We'll now build a very simple web application that responds to HTTP requests, dockerize it and deploy to Qovery - a scalable Container as a Service platform.

For the sake of simplicity, we'll create a simple Node.js application that returns a Hello, World text in response to HTTP requests. I choose Node.js here because it's simple and popular technology, but you can use Docker with basically any language and framework.

Let's create an empty folder for our new application and initialize an empty Git repository:

Now, create app.js file with the source code of our server:

It is a very simple server that returns "Hello World" text on its root endpoint. After it's done, we want to make this app run in a Docker container. To do so, we need to create a Dockerfile.

Besides containers, Docker uses the concept of Images. Image is a template used to create and run containers. Dockerfile describes the steps required to build the image. Later on, this image is used as a template to run containers with your application.

You can think about images and containers as a good analogy to classes and objects (instances of a given class) in the Object-Oriented Programming world.

Create a Dockerfile that will allow us to run our Node.js app in a container. Create a file named Dockerfile with the following content:

Let's discuss all lines of the Dockerfile:

Now we got all basic things we need to run our application in a Docker container! Let's try it out:

Great! The container is up. Run docker ps to see the list of running containers and confirm that it is indeed running.

Now open a browser at http://localhost:3000 to see that the application in a container responded with Hello, World message.

Did it work? Great. Our app works well in the Docker container. It's adorable, but we want to share our app with the world - running applications only on our own machine won't make us millionaires!

Container as a Service

To deploy our Dockerized application, we'll use Qovery. It's a Container as a Service platform that allows us to deploy Dockerized apps without any efforts. Qovery is free up to three applications (and databases!) in the community version.

After you have access to Qovery, it's time to deploy the application.

To check that your application is in fact deploying, run qovery status:

In this guide, you learned the essential basics of Docker. You also learned why you should be interested in using it, and how to deploy your application to the cloud as a Docker container. This is all you need to know to improve your development experience and deploy your application to the cloud with ease! If you have any questions or feedback please do let me know in the comments or join Qovery Discord server and feel free to speak your mind.

The basics of React internals - Blog 1

How Did I build My First React Package