My previous articles focused on measuring Android app start in production. Once we've established a metric and scenarios that trigger a slow app start, the next step is to improve performance.

To understand what makes the app start slow, we need to profile it. Android Studio provides several types of profiler recording configurations: 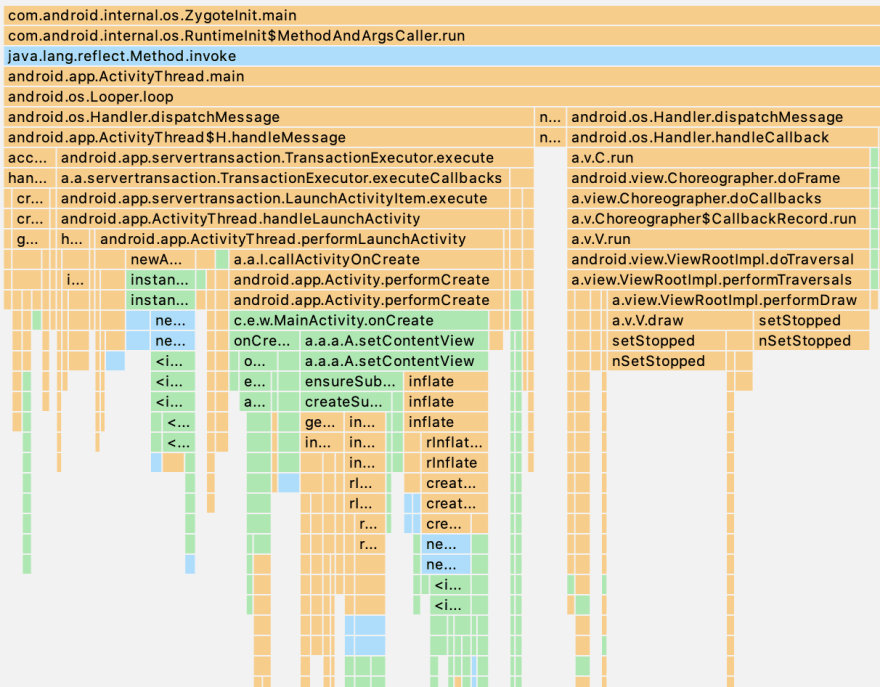 The Android Studio profiler has UI to start a trace by connecting to an already running process, but no obvious way to start recording on app startup.

The option exist but is hidden away in the run configuration for your app: check Start this recording on startup in the profiling tab.

Then deploy the app via Run > Profile app.

Android developers typically use a debug build type for their everyday work, and debug builds often include a debug drawer, extra libraries such as LeakCanary, etc. Developers should profile release builds rather than debug builds to make sure they're fixing the actual issues that their customers are facing.

Here are a few options to work around that issue.

Libraries and Android Framework code often have a different behavior if the APK is debuggable. ART disables a lot of optimizations to enable connecting a debugger, which affects performance significantly and unpredictably (see this talk. So this solution is not ideal.

2. Profile on a rooted device

Profiling on an emulator is generally not recommended - the performance of every system component will be different (cpu speed, cache sizes, disk perf), so an 'optimization' can actually make things slower by shifting the work to something that's slower on a phone. If you don't have a rooted physical device available, you can create an emulator without Play Services and then run adb root.

3. Use simpleperf on Android Q

There's a tool called simpleperf which supposedly enables profiling release builds on non rooted Q+ devices, if they have a special manifest flag. The doc calls it profileableFromShell, the XML example has a profileable tag with an android:shell attribute, and the official manifest documentation shows nothing.

I looked at the manifest parsing code on cs.android.com:

It looks like you can trigger profiling from command line if the manifest has <profileable android:shell="true" /> (I haven't tried). As far as I understand the Android Studio team is still working on integrating with this new capability.

At Square our releases are built in CI. As we saw earlier, profiling app startup from Android Studio requires checking an option in a run configuration. How can we do this with a downloaded APK?

Turns out, it's possible but hidden under File > Profile or Debug APK. This opens up a new window with the unzipped APK, and from that you can set up the run configuration and start profiling.

Android Studio profiler slows everything down

Unfortunately, when I tested these methods on a production app, profiling from Android Studio slowed down app startup a lot (~10x slower), even on recent Android versions. I'm not sure why, maybe it's the "advanced profiling", which doesn't seem like it can be disabled. We need to find another way!

Instead of profiling from Android Studio, we can start the trace directly from code:

We can then pull the trace file from the device and load it in Android Studio.

When to start recording

We should start recording the trace as early as possible in the app lifecycle. As I explained in Android Vitals - Diving into cold start waters 🥶, the earliest code that can run on app startup before Android P is a ContentProvider and on Android P+ it's the AppComponentFactory.

Unfortunately we cannot control the order in which ContentProvider instances are created, so we may be missing some of the early startup code.

Where to store traces

When to stop recording

In Android Vitals - First draw time 👩‍🎨, we learnt that cold start ends when the app's first frame completely loads. We can leverage the code from that article to know when to stop method tracing:

We could also record for a fixed amount of time greater than the app start, e.g. 5 seconds:

Another option for profiling app startup is uber/nanoscope. It's an Android image with built-in low overhead tracing. It's great but has a few limitations:

Yes - Nanoscope only traces the main thread for now, but working on multithread support at @perf_dev. Follow us for updates.

Once we have a startup trace, we can start investigating what's taking time. You should expect 3 main sections: 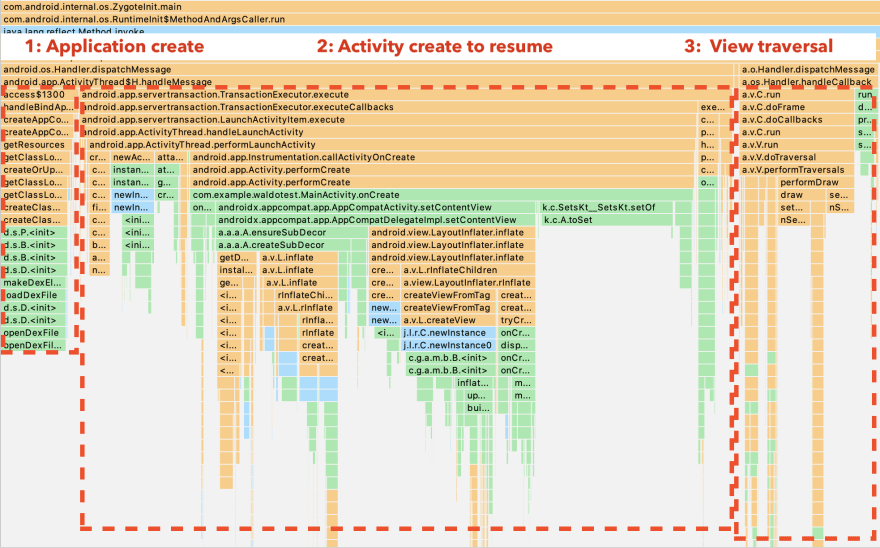 If you notice that a service is being started before the first view traversal, it might be worth delaying the start of that service so that it happens after the view traversal.

Firebase User Authentication:Email and Google Sign in on Android with Kotlin