We know that every new Promise() returns an object with three possible states, where as only one of the states the Promise is able to resolve to : depending on the situation , it would resolve to the state, i.e. either of : <pending> / <fulfilled> / <rejected> . Initially every Promise comes with the state ([[PromiseStatus]]) of <pending> and value of undefined ([[PromiseValue]]) . The following of :[[PromiseStatus]] and [[PromiseValue]] are internals (closures) of Promise you are not allowed to access

A resolved promise may be *pending, fulfilled or rejected [1].

NOTE : herein "settled" is not a state itself , rather a linguistic convention used for indicating change of state [2]. 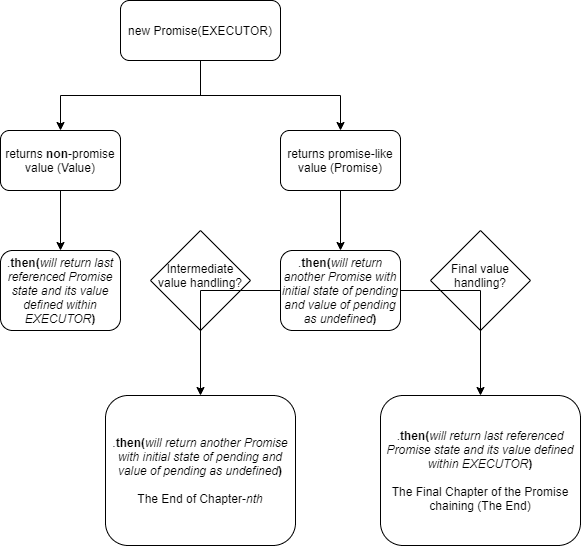 Let's examine a real life example a bit (shown below) :

NOTE : in terms of Example 1 , specifically for file system module , developers mostly rely on promisified fs module of require('fs/promises') with techniques of async / await applied upon that simplifies one's day for sure .

I could present examples of N-tuple , but the Rule of Thumb algorithm is :

To conclude: it depends whether the following .then() returns Promise-like or non-Promise-like value. Depending on this, the following Promise chain would behave differently and that's all about how states are handled and what values would be return respectively .

If any typos found and (or) suggestions could be made, please leave it in the comment section below . Thank you and see you in the next one !