In this post, we will go over why branching is required, the difference between development, staging and production environments, why a strategy is required for branching, and look at a good Git branching strategy.

It is a general practice to commit your changes very ofter regularly, so that the changes are not missed. There is a saying among developers that start the day by pull, take a break on commit and end the day by push

Why branches are required?

It becomes so confusing to bring back the previous state. It becomes very hard to track the commits. And reverting a commit is very common during any feature development.

The features x(header) and y(footer) are coupled together in the master branch, and a change in feature y causes an error, the same error will affect the development of x.

Now check the image below.

Once the development is complete, we can merge the branches back into master.
Now, if the client says he does not want the footer, we can just revert to commit 7. If it is before the merging, we will just abandon the footer feature.

Now that we understand the need for branches, if we keep creating branches as we want, it will lead to an even harder time managing the features. If Developer 1 follows a method, developer 2 follows another method, and so on, it causes a pandemonium. Hence we need to devise a strategy, which will be followed by all developers in the team.

Before jumping into the branching strategy, let us have a look at what is environment and the different types of environments.

Environment and the difference between development, staging and production environments

An environment in this context, includes the necessary hardware(single or multiple servers), Software dependencies, database, compiler/interpreter, network access for an application to run, and the application is hosted and tested in such an environment. There are many environments like training, PSR, and so on. Among the major environments, the main 3 environments that should definitely be used are development, staging, and production environments.

This is the environment where you develop your code and test it. All the commits made you or your fellow developers will be built and tested in this environment. It might be your local machine. But the best practice is to have it deployed in the cloud or your local datacenter, like a production would be hosted. By having the environment similar to prod, we will be able to find out issues at the early stages of development.
It will be connected to a dummy database. The changes you make in the development environment will not be visible to the users when they view your application. This is just for you and the other developers to see how new features will work and to try out improvements.
Various unit, integration testing will be carried out based the testing model in this environment. A thorough check of the code is done at this phase to reduce the bugs.

After the testing and the feature is agreed for a release, the code is moved to the staging environment.

There are many different branching strategies available. We will look at one such strategy which will immensely aid the release management.

The above branches should be created before developing any features and should not be deleted at any point in time, as long as the project/application exists.

So for any new feature to be developed, a new branch should be created from develop branch, which should be named like feature/x.

For any bug to be fixed, here also a new branch should be created from develop branch, which should be named like bugfix/x

huge project with many users

In a huge project involving many users, a single feature, depending on the need, can be worked by many users. In that scenario, from the feature branche, we can create a user branch, which should be named like userX/z

Once the task of the user is completed and tested in user's branch, it will be merged to the feature branch from which it will be created using a pull request.

Once a feature is developed and tested or a bug is fixed, the feature or bugfix branch will be merged to develop branch using a pull request.

Assuming there is a feature for header, a bugfix to fix the title of the page, and the header feature has two tasks for header width and header color and is developed by two developer user1 and user2, then after creating branches in the above pattern, it would be like below: 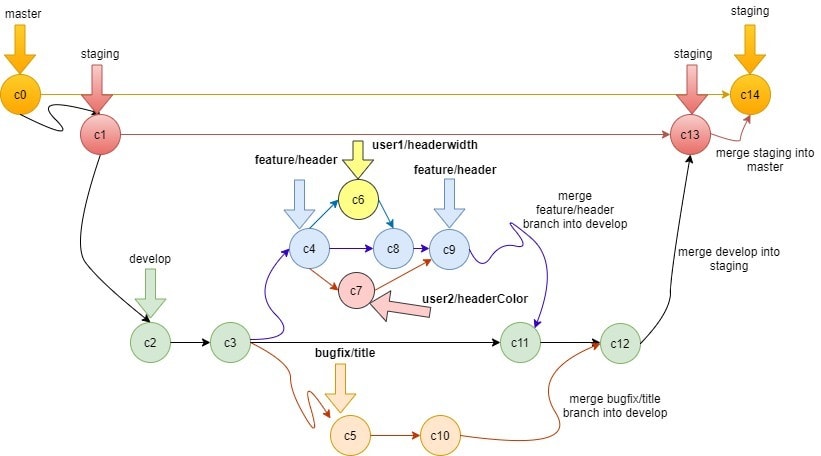 I'll go through some of the rules which are generally followed for the branches.

We have been using this strategy in my team and it helps a lot in code and release management. This strategy is also very helpful in setting up a CI / CD pipeline.

Data Engineering Should Not Be A Problem For BI Analysts