Today I had the chance to talk with some smart people about working from home. They have 35 years of combined experience doing it, and you can watch the AMA here.

But I thought I'd share some more tips about working from home.

I've been a remote employee for Pluralsight since June. I worked from home for a few years as a software engineer before that. Here are some things I've learned over the years.

If you're asked to work from home, you may be thinking one of these two things:

Depending on your job duties and personality, either of these can be true. There are certain types of work that flow faster when done from home. They're usually "heads down" tasks, such as coding, writing, and other solo activities.
Roles that rely on human interaction are more of a struggle. If you walk through the office talking to others 20 times a day as a part of your job, it won't be as easy. If personal collaboration is a part of your job, it will change.

Years ago, I was a software engineer and was asked to work from home. They were remodeling a section of the building I worked in, and we had no office space left. I was told, "This is temporary. In 6 to 9 months, we'll bring your team back in". For me, it was a big adjustment.

I worked at a campus with 4,000 other people. A full cafeteria, gym, and most of my team members sitting near me every day. We had routines, and it worked well. We did code reviews every day, which was usually a quick walk to the other person's cube. There was a "tech culture" vibe at the company that was inspiring. Suddenly I'm sitting in the living room of my condo an hour away by myself. Code reviews are dry and text only. There was no trendy cafeteria with 1000 food choices. It was my kitchen.

A funny thing happened, though. I adjusted, as did members of my team. Things were pretty slow at first. Then we came up with systems and routines, and we had gotten used to it. We ended up being more productive once we were all remote. The folks at the top noticed. Once space was available, we were told to "hold off" on moving back.

After a year, we were told: "you can put in a request for a cube or continue working from home." It was almost like they didn't want us coming back! It worked out so well they made it permanent for the team. I ended up working from home another two years after that until I left the company.

Moral of the story: the forced push to remote may turn out better for you and your organization. It's not true for everyone, but I've seen it firsthand.

So here's what I've learned that works for me. Your mileage may vary.

If your organization tells you there's no set schedule ("just get your work done"), set one anyway. Pick times that work well with the rest of your team. Have morning routines established during the time you would have spent commuting. My wife laughs when I say something like: "I slept in and was almost late for work." How can you be late when you work from home? In my mind if I'm not showered, dressed, and at my desk at 7 am, I'm late. There's flexibility, but this mindset works well for me.

You'll need to set some rules for your family and friends. Practice saying "Working from home does not equal the day off." When I first started working from home (around ten years ago), it wasn't nearly as common as it is now. So I would get odd requests to things as if I had the day off. "Hey, wanna go to the beach with us? You work from home, right?" and the like. "Can you pick up my car from the shop for me? You work from home." You may hear things like "just take your laptop then!"

Practice saying no. Establish the expectation that you will be at work during set hours, which means you can't run off for half a day just because there isn't a boss watching you.

While the above is true, you shouldn't just sit at your desk for 8 hours. Take breaks. Stand up, stretch. Go for a walk. It's OK! You may feel guilty about this as I did at first. I felt guilty for going for a 10-minute walk in the afternoon. But then remembered all the times I did that when I worked in an office. It's no different! I never felt guilty about going for a walk outside around the building when I was in the office. I'd invite others to go with me, including my boss at the time. So why should that change when you work from home?

You're an adult, and you know where your limits are. I wouldn't suggest going into the living room and binge-watching Netflix or playing games all afternoon, but being chained to your chair isn't good at either. Find your balance and build habits to get away.

This one is tricky. What do you do for lunch? Everyone's lunch habits are different, but when I worked in an office, I loved the cafeteria or a nearby restaurant for lunch. I'd invite my coworkers or meet my spouse somewhere. I rarely brought my lunch because it was a social thing for me.

Now it's a solitary affair. I prepare my lunch at a specified lunch time. I make sure to leave my working area, prepare something to eat then take the time to eat it. I don't eat at my desk. The separation and mental break is essential. It may be less than an hour if I'm busy, but I make sure to break away for that.

Unfortunately, I live out in the country, so social lunches with my friends aren't frequent. I still try to do it occasionally. It's important to get away.

5. Adjust How You Communicate

Communication between colleagues will be different from working from home. You don't get the advantage of inflection, mood, or tone over text. So think about what you're saying and how it can be perceived. At the same time, don't make assumptions about what others are saying to you. Ask questions to clarify, and don't assume the tone of what they're saying. Maybe they're sarcastic or snippy, maybe not. Take the time to figure it out. Use video when you can. Often when I'm in a discussion over Slack, I will say:" can we jump on Zoom really quick?". It's the same amount of time spent, but the communication is so much better.

Want Some More Info About Working from Home??

Today Pluralsight released it's Remote Work Guide, which is a set of tips, hacks, and tools for working from home. It's all free, no subscription required. 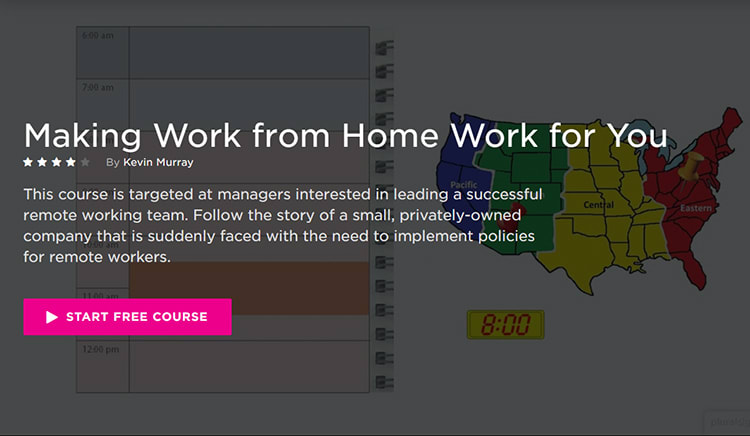 Making Work from Home Work for You

This course is targeted at managers interested in leading a successful remote working team. Follow the story of a small, privately-owned company that is suddenly faced with the need to implement policies for remote workers. 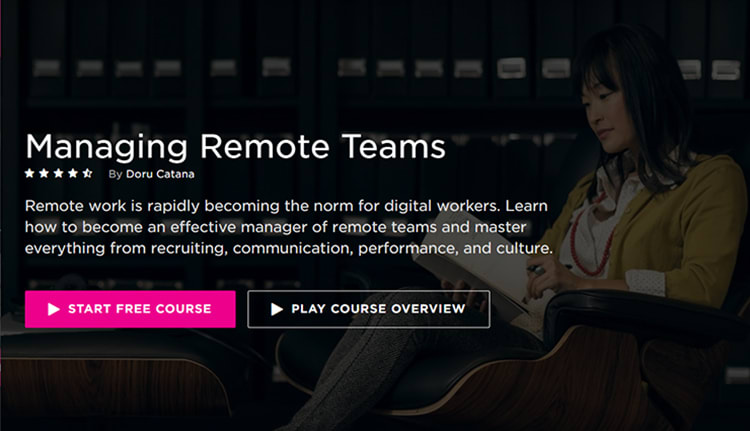 Remote work is rapidly becoming the norm for digital workers. Learn how to become an effective manager of remote teams and master everything from recruiting, communication, performance, and culture.