Follow me on Twitter! I'm happy to hear what you think of this, and suggestions for new articles.

It's hard to find serious software these days without unit tests. So if you're considering a migration of your .NET applications to .NET Core, or considering starting a new project in .NET Core, one of your first questions may be: can we unit test it? The answer is yes, and in this tutorial I'll show you how easy it is to set up unit testing in .NET Core with the dotnet CLI.

For this tutorial we'll build a simple class library called "string modifier". As the name suggests, it will be used to modify strings. We'll use the .NET Core CLI to create a new class library. 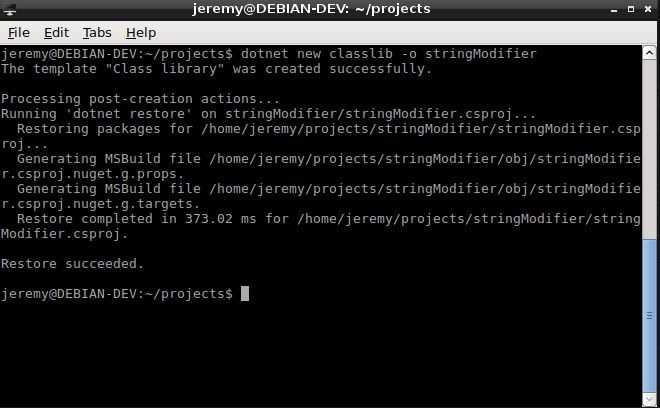 This uses the dotnet CLI to create a new class library in the folder named stringModifier. It creates an application that is essentially just a basic class. We're going to name this something a bit more useful though.

rename your class to ChangeMyString. It should look like this:

We're going to create a library that modifies strings for us, so let's add a couple methods to our string modifier library.

This method will make any string you send it all uppercase.

The next method will reverse a string:

Now these are obviously for demo purposes and easy to see what they do, but let's do a quick smoke test with them.

Let's make sure the application builds. Run the following in the folder your project is located in: 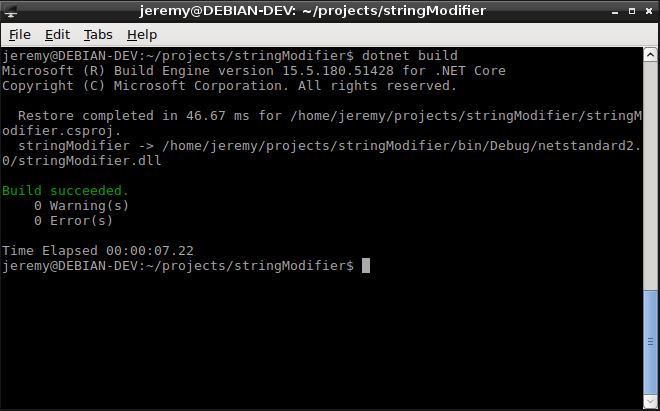 And we can go into our BIN folder and verify the artifacts were generated:

Now you're ready to go.

Let's build a quick console application that calls the class library just to do a quick visual test of functionality. Exit out of the project folder, and we want to use the dotnet CLI to create a runner for this.

This will create a simple "hello world" application for us. Open up Project.cs and add the following using:

then add the following into the Main method:

The entire method should look this:

Now, back at the command line, let's add a reference to our class library:

This will add the reference to the class library automatically. You could also manually put in the following in the .csproj file:

Either way is fine. Now we're ready to run it:

Now we can verify that the methods work as we expect them to. But we'll add some unit tests to be sure.

Remember: Unit tests are not just to check the individual functionality of a method. They also check the functionality does not change when other parts of the application change. This is part of what makes them so important.

Let's build a separate project for the unit tests. This is the project you'll run after a build, or preferably automatically on a build server every time you deploy.

Exit out of the directory you were just in and let's use the dotnet CLI to create yet another project. This will be an MSTEST Unit Test project.

This creates a unit test project in the libraryTester directory. Now we open up UnitTest1.cs, and this should look really familiar to you if you've built unit tests before. This looks identical to tests in conventional .Net.

So let's add a couple tests.

First we need to add a using statement to include the library.

The first tests we want to run are to make sure the test method returns a string. Now we know the return type of these methods, but we want to make a test to catch it if everyone ever changes that:

Next we want to test the actual functionality of the methods. So we have a couple test cases here to do that.

This is what the final file should look like:

These are some pretty basic tests, but should be good for now. Let's try it out.

Now we're in the library tester folder, and In order to build this, we'll have to add a reference again.

It looks like we don't have any failures here so we should be good to go.

To run the tests we'll type in 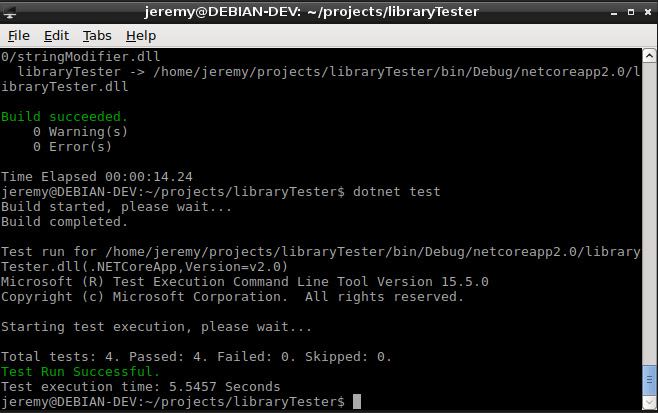 And our tests are successful! We can see that 4 tests were run and everything is green.

Now, let's break a test just to see what that looks like.

Let's go back to our original library. Change this:

Let's refactor the method to pass through the string instead of making it upper case. Save it and build it.

And go back into our library tester folder, and run a test again: 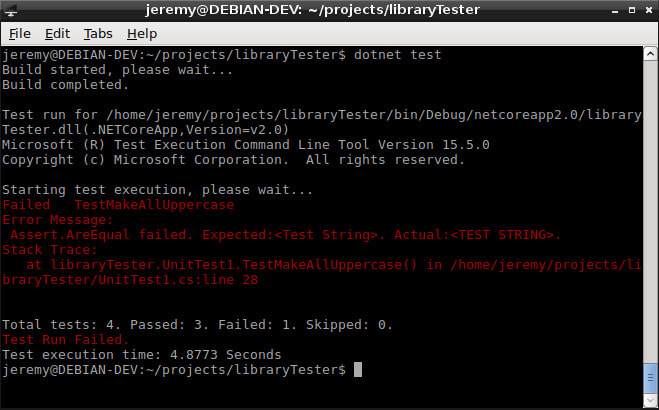 And now we have a failure. As you can see by the splash of red on the screen it threw an error. It expected test string to be in all caps, and it's not.

This is a great feature of unit tests, if some yahoo goes in and refactors something and breaks the functionality, your test will pick it up right away.

This is how easy it is to build unit tests in .NET Core!! 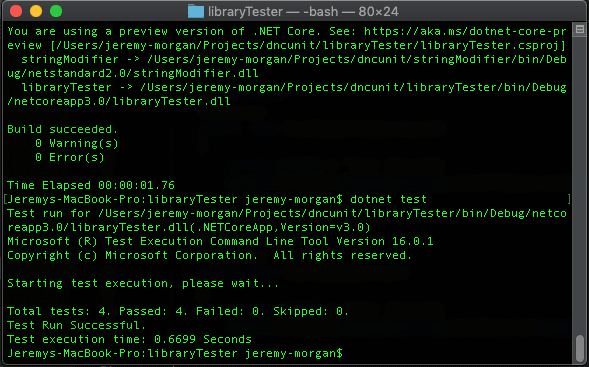 I used Debian Linux for this tutorial, but you don't have to. Using the dotnet CLI this tutorial is the same in Windows, Linux, or OSX. That's the beauty of .NET Core!

Unit tests are super important. I won't use this tutorial as a lecture, but they're well worth your time and too frequently overlooked. Just because you're developing .NET Core apps doesn't mean they can't be unit tested, MSTEST seems to work very well with everything I've done with it so far. So do it!! Leave any feedback in the comments or Yell at me on Twitter

For a good intro to testing in .NET Core, check out this article just posted:

My ASP.NET Core Skill IQ is 200. Not bad, but can you beat it? Click here to try