This tutorial will use Blender 2.91

Set up the scene.

This won't cover the basics. I highly suggest Andrew Price's excellent tutorial videos on YouTube to get you started. However, everything needed to duplicate this scene exactly is listed below.

Everything for this scene is default except for removing the default cube, repositioning the camera, and adding the text with the settings shown. 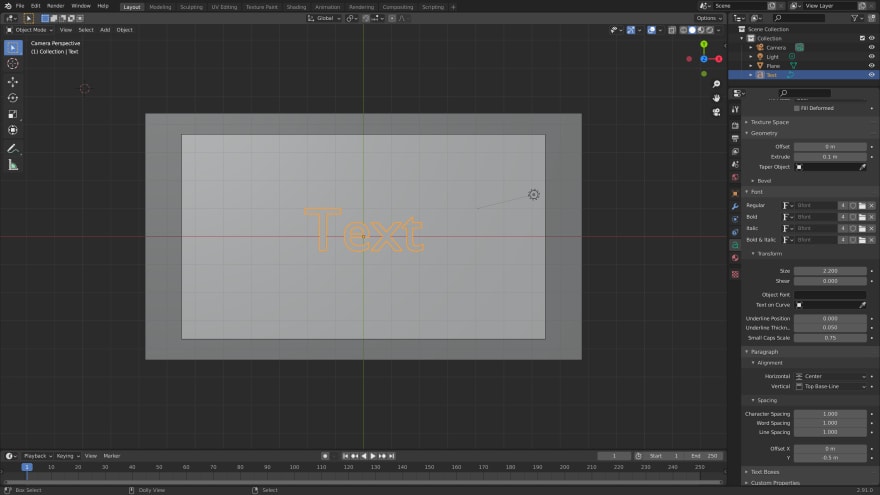 This is what we start with. Take note that the text object has the name "Text". We will use that to reference this object later. Also, do not convert the text to mesh. Some fonts require you to convert them to a static mesh to render correctly because of artifacts when you give them 3d geometry as text objects. You just have to choose compatible fonts to do it this way. Smooth corners and edges are best. 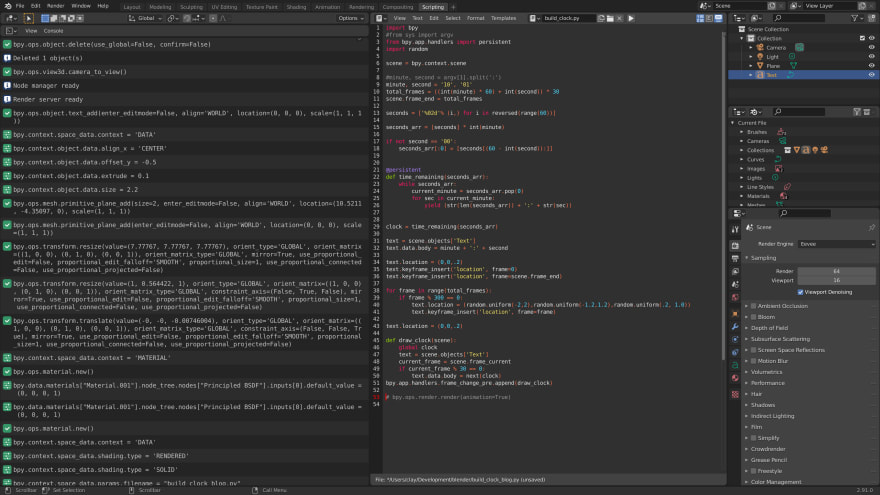 Everything that I have done to set this scene up using the UI can be scripted with Python as well. To learn the API, simply use Blender and look at the output from the Python console. In this case, I used the UI to make the scene and left Python to code the interesting part, but if you duplicated the commands from the Python console in a script as well, you would get the same scene. In fact, you don't need the UI at all and can construct an entire scene from the Python shown if you want a challenge.

The following will break down the data structure, generator, and callback that makes the clock work.

This total_frames in the following section is being calculated for a full motion display. This example doesn't need to render all these frames if none of the scene elements move and the way to do that is covered later.

This will create the correct order for our clock to count down to zero. To count up, omit

and add the partial seconds to the end

There are several ways to iterate over the structure we just made. The method I chose was to create a generator because I knew the frame change callback would be the perfect time to call a next iteration function.

Skip this if you just want the countdown. I wanted the clock to move gently around the scene and I didn't want to set all those keyframes by hand. You can use other methods you may remember from geometry to draw circles or figure 8 patterns. I just wanted random movement in all axis within a small range.

Time to tie it all together and automate our scene. Blender provides several powerful events that you can trigger callbacks with.

The method of choice for this example is frame_change_pre. This will fire on each frame change, before the frame is drawn. If the frame number on change is divisible by the frame rate, then it will decrement the second count until it reaches zero just before the last rendered frame.

You only need to run the script one time. In the above screenshot, I left the commented code for using this script from the command line. Once the script has run, you should have the following first frame if you render the image. 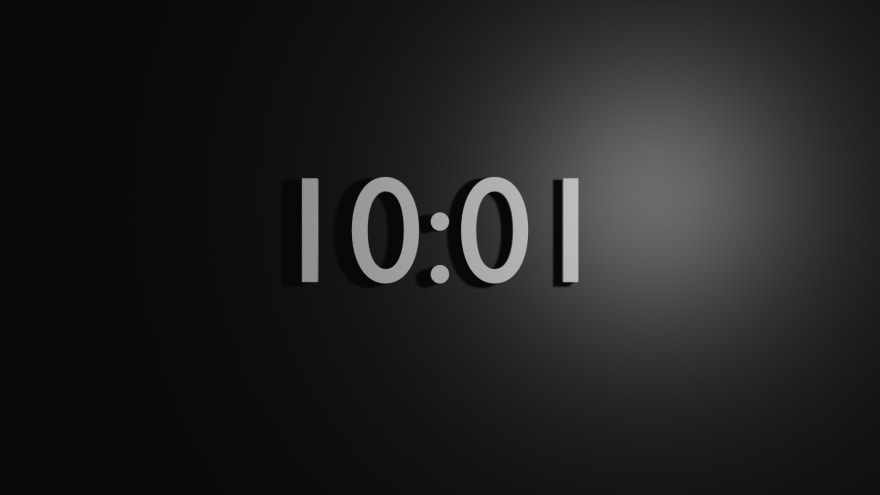 If it all looks good, check your output directory, change the project fps to 30, and hit Render Animation. A 10:01 animation is 18030 frames, so expect this render to take a long time if the clock is moving around the screen with the optional code! If you are rendering without motion, you can start on frame 0 and skip 30 frames each sequence since the light source is not moving and there is no reason to render the exact same frame repeatedly.

x
Student at Flatiron School in Seattle
How to control addressable RGB lights with a ESP8266. Part 3 of 3. Episode 1 of 2.
#micropython #neopixel #tutorial
What's new in Python 3.10
#python
And &, per se.
#ruby #programming #tutorial

Once suspended, pierceclayton will not be able to comment or publish posts until their suspension is removed.

Once unsuspended, pierceclayton will be able to comment and publish posts again.

Once unpublished, all posts by pierceclayton will become hidden and only accessible to themselves.

If pierceclayton is not suspended, they can still re-publish their posts from their dashboard.

Once unpublished, this post will become invisible to the public and only accessible to x.

Thanks for keeping DEV Community 👩‍💻👨‍💻 safe. Here is what you can do to flag pierceclayton:

Unflagging pierceclayton will restore default visibility to their posts.