Like with most (if not all?) problems in software, there is no silverbullet-one-size-fits-all-solution here. Instead, you have to find the solution that best meets the requirements of your particular system. In this blog post, we are going to look at an easy(ish) approach of guaranteeing eventual consistency even if we miss a domain event now and then. The examples assume we are using Spring and Java, but the principles apply to other frameworks and languages as well.

The idea behind this approach is to use scheduled jobs instead of (or in addition to) domain events to synchronise state between aggregates or even between bounded contexts. The jobs run automatically at different intervals or times of day, but can also be triggered by domain event handlers. This means that if all goes well, the data will become consistent across the system within seconds of the domain event firing. On the other hand, if something goes wrong, the data will become consistent after the next successful scheduled run. 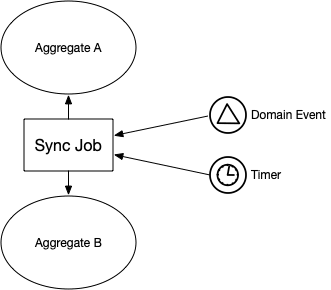 A system like this is not difficult to implement, but also not as trivial as it may seem at first look because of some caveats. However, you can avoid them by following these guidelines:

Make Your Jobs Accept All or Some Inputs

When you run a scheduled job, it is typically some kind of batch operation that works on all applicable inputs. However, in this particular case, you also want to be able to run the job on just one particular input or a small set of inputs. This allows for a lot of flexibility and is quite easy to do if you design the job in this way from the start.

Let's say you have a job that will create an invoice for an order that has been shipped. The class would have the following methods:

Decouple the Job and the Triggering of the Job

When you design your jobs, think about when and how they will be triggered:

I would recommend a design that looks like this: 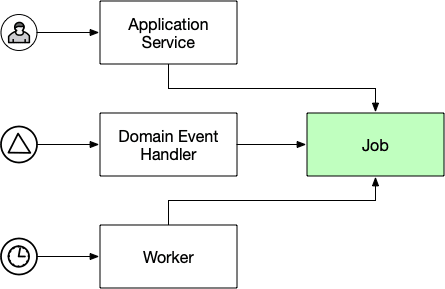 Let's continue with the invoice generation example. We start with a domain event handler that generates an invoice as soon as an order has been shipped:

Next, we want to trigger the job every day at midnight:

Finally, we want administrators to be able to trigger the job at any time through an application service:

When you write a job, you know what the intended end state of the system is going to be. However, you should never make any assumptions about this nor should you make assumptions about what the start state is. Your job should always check what the start state is, and then figure out what actions it needs to take in order to get to the desired end state. If the system is already in the desired state, your job should do nothing.

If your job is implemented like this, you can run it as many times as you want with the same inputs and it will not cause any side effects (like generating multiple invoices for the same order). If a job execution fails because of e.g. a network error or power outage, you can just re-run it later.

Let's again continue with the invoice generation example. In the initial design, the states an order will traverse through are the following: 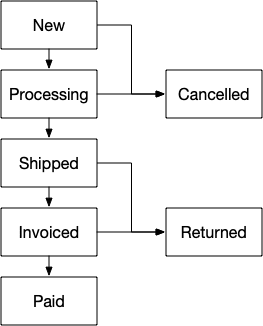 The first step on our road to idempotence is therefore to check the state of the order and only take action if that state is SHIPPED. For each shipped order, the job will then perform the following:

However, there is a problem here: what happens if the second transaction fails for some reason? That would mean that the next time the job runs, there is already an invoice even though the state is SHIPPED.

Thus, the next step on our road to idempotence is to detect whether an invoice has already been create for a particular order. We can do this by adding an OrderId field to the Invoice aggregate and use this to check that no invoices have been created before creating a new one. If an invoice already exists, the job will just proceed to setting the state to INVOICED (you will need some database constraints or pessimistic locking to implement this properly, but that is outside the scope of this article)

In more complex situations, you may have to add some intermediate states (such as INVOICE_GENERATION_IN_PROGRESS) to be able to pick up where you left off in case of failures.

Since your job can be started in many different ways, there is a risk that it will be started while it is already running. If the job is idempotent, this should not cause any data consistency problems, but you may end up with transaction deadlocks or other concurrency issues. Also it is a waste of resources and may slow down other parts of the system.

If simultaneous executions of the same job is a rare occurrence, you may choose to just live with it and let the idempotence handle it. However, if it happens frequently, you should deal with it in some way. The action you take depends on the use case, but typically it is one of the following:

I could write an entire blogpost only about this particular problem so for this example, we are going to narrow down the scope quite a bit and continue to use the invoice generation case.

Let's say we are dealing with a small application that is only deployed as a single instance so we do not need to worry about situations where the same job runs at the same time on different machines.

The first thing we want to do is to make sure that only one instance of the batch operation can run at a time. The easiest way of doing this is with an AtomicBoolean (because InvoiceCreationJob is a singleton):

This is good enough since the batch operation is only used as a fallback solution in case we would fail to properly handle some InvoiceShippedEvents.

What about the createInvoiceForOrders method then? This method is likely to run simultaneously for different Orders but that is not a problem so we do not want to prevent that.

When you implement a job, you should think about which thread it is going to run in. Will it always run inside of its own thread regardless of how it was started, or inside the thread that started it, or a combination of both?

Let's have a look an some examples to illustrate why this is important:

Now let's say the jobs mentioned above are actually the same job. In order to keep your options open, you should always implement your jobs to run inside the calling thread and then let the callers worry about which thread to use.

Scroll back up to the example that demonstrates different ways of triggering the job. Note that the application service uses the @Async annotation whereas the domain event handler and the worker do not. Why? Let's have a look at each case:

Use Upper Limits in Your Queries

Your jobs will perform different queries to determine the state of the system. The amount of data that needs to be processed depends on many factors, such as how heavily the system has been used or when the job was last run.

Because of this, whenever you write a query, you should stick to the good ol' rule of thumb: Any query will return either no records, exactly one record, or a huge load of records

Unless you know for sure that the query falls in the first two categories, you should always add an upper limit to your query. You can either implement the job to run in batches until there is no more data to process, or just process the first N records and then wait for the next run.

When you schedule a job, you typically have the following alternatives:

Picking the correct schedule for your job may require some trial and error. If you run too often, you could end up starting new jobs before the old ones have finished, slowing the entire system down and causing transaction deadlocks in other parts of the system. If you run too rarely, the users are unhappy. You may have to try out different schedules to find the best balance.

Finally remember to look at all your jobs as a whole: is there a risk of running into conflicts between different jobs working on the same data? Are different heavy-weight jobs running simultaneously? Do some jobs need to run before others?

Now when we have familiarised ourself with the general idea, we need to look at how it fits into the system architecture (which is assumed to be hexagonal).

Application services and domain event handlers we already know, but where would the workers and the job go? Let's start with the worker, because it is the easiest one.

A worker is a component that triggers actions in response to events generated by a timer. It can control its own transactions and threads if needed. This puts it into the orchestrator category, together with e.g. domain event handlers, and thus it belongs in the application layer.

But what about the job itself? The answer to that is: it depends. Read on.

When the job is about propagating changes from one bounded context to another, we are talking about context mapping. The implementation and location of the job depends on the integration pattern you end up choosing. Let's look at three examples (there are more solutions than that but we have to draw the line somewhere).

In this case, there is a one-directional relationship between both contexts where the downstream context wants the upstream context to either perform some action (push) or return something (pull). This typically leads to the following architecture:

In this case, there is again a one-directional relationship between the contexts, but in this case, the downstream team has decided to completely shield the application from the upstream context:

A middleware solution may come in handy in cases where you have no control over any of the involved contexts, or where the relationship is bidirectional even though the contexts themselves are not aware of each others' existence:

Now it is time to wrap things up by looking at the pros and cons of using scheduled jobs to achieve eventual consistency.

The main advantages with this approach are the following:

However, it also has several drawbacks:

Clearly there are systems that are suitable for this approach and I have successfully used it myself in customer projects. However, there are also lots of systems out there for which this approach would not be appropriate. In a future blogpost (or possibly blogposts) we are going to look at other ways of making sure our domain events are not missed and how we can distribute them between systems. Stay tuned!

Once suspended, peholmst will not be able to comment or publish posts until their suspension is removed.

Once unsuspended, peholmst will be able to comment and publish posts again.

Once unpublished, all posts by peholmst will become hidden and only accessible to themselves.

If peholmst is not suspended, they can still re-publish their posts from their dashboard.

Once unpublished, this post will become invisible to the public and only accessible to Petter Holmström.

Thanks for keeping DEV Community 👩‍💻👨‍💻 safe. Here is what you can do to flag peholmst:

Unflagging peholmst will restore default visibility to their posts.