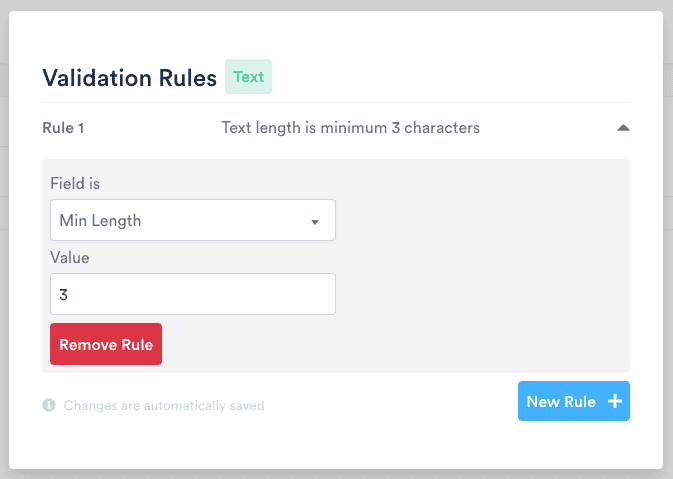 Following the addition of roles and permissions, we’ve just released field rules. Field rules allow you to set up validation rules for fields in your database.

The Busywork platform is database-centric, which means that many of the major feature releases lately have revolved around the database API and view. Our latest release introduces field rules. This allows you to set up validation for individual fields, visually, from within Busywork.

For starters the following rules have been implemented:

These rules are in addition to the schematic rules already available, such as required , unique and data type.

You can add multiple rules to each field, like in the example above. This allows you to set lower and upper limits to the length of a text field, for instance.

This example requires you to set up a new database table. The first step is to create the new table, let’s call it Projects. The table should contain the following fields:

In addition to specifying the type for the fields, now add a set of rules to the Lines of Code field. Specifically, add a rule that doesn't allow values less than 0 and greater than 100.000.

This results in a response similar to this:

Now we can try to make the query fail by changing lines of code to a value less than 0 or greater than 100.000.

This should give you the following response:

Confirming that the insert operation isn’t valid because of the lines of code value we're trying to pass.

10 Niche Ideas for Web Developers to Get Clients

Understanding Reflow and Repaint in the browser