I’ve been working with Azure Bastion for a few weeks and while doing so, I noticed the resource price is pretty high for what it does. So, I decided to find a way to save costs and automate the lifecycle of the resource on demand, and still be able to use all the features that it provides. While doing some research, I stumbled upon this Reddit post which I used as a reference and decided to make some changes based on my use case. Before jumping to the solution, let’s see what Azure Bastion is.

Azure Bastion is a PaaS service provided by Microsoft that can be used to securely connect to your VMs either using RDP or SSH port over SSL, all without exposing your VMs directly to the internet. That being said, you can log in to your Windows or Linux VMs right within your browser session without assigning any Public IP address to VM itself. How cools is that?

The primary purpose of using automation is to save cost by provisioning the resource only when needed without any overhead of maintaining the lifecycle of the resource. Using a Logic App workflow for this case seems to be an ideal solution that will trigger the automation via an HTTP POST request. Based on the body of the incoming request, either “Deploy” or “Destroy”, Logic App follows the case flow of creating or removing the Bastion Host. The creation of Bastion uses the ARM template and input parameters whereas the removal of the resource is performed via an HTTP POST request to the resource URI. To simplify the authentication and permission, Logic App uses Managed Identity with permission to a resource group where Bastion will be provisioned. It would be helpful if you are at least familiar with Logic App, however, I’ll be giving step by step instructions on the whole setup.

Before you deploy Bastion resources, you must deploy some necessary resources to facilitate the Bastion deployment automation. You need to have a resource group with one Virtual Network (VNet) and one Standard SKU Public IP address that will be used later in the ARM template. If you decide to follow along with the steps for deployment, make sure:

Steps below assume that the resource group name is ps-devshared-rg where you will deploy virtual network and public IP resource and Bastion host later.

The first step towards the bastion automation is to create a Virtual Network that Bastion will connect to during automated deployment. You need to create a virtual network in the resource group ps-devshared-rg with a dedicated subnet for the bastion network. You can deploy the VNet using Azure Portal GUI or choose to use the following Azure CLI commands. Be sure to change the value for the following variables based on your resource naming convention: resource-group, name, vnet-name, and subnet-name.

You can use Azure PowerShell command instead as described below:

The next step towards the automation is to deploy a Public IP resource that Bastion Host will use. Make sure that you use “Standard” SKU of Public IP instead of Basic SKU during the deployment as Basic SKU is not supported with Bastion Host.

Use the Azure Portal GUI to perform the deployment or follow the commands below for either Azure PowerShell or Azure CLI deployment. Make sure you rename the value for the variable resource-group and name for your Public IP resource name.

Now that you have a Public IP and VNet available, it’s time to create one last resource that is the backbone of while automation. You need to deploy Azure Logic App for this purpose which will follow a logical approach of either deploying or destroying the resource based on the input.

Follow the steps below to create the resource using the Azure Portal. 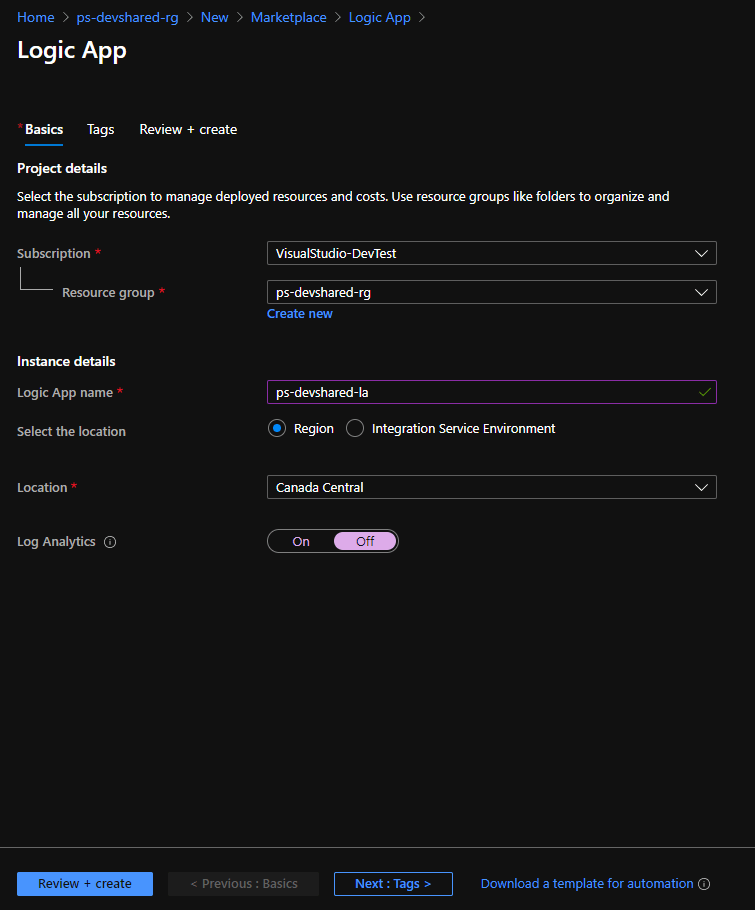 Azure Logic App CLI extension 'logic' is experimental and not covered by customer support. Please use it with discretion.

Since we have out Logic App resource, the very next thing for this resource is to allow it the permissions to create and remove the bastion resource in its resource group on demand. For that, you will need to assign it the system-assigned managed identity with permissions to resource group where you would like to deploy the Bastion Host. Follow the steps below to make the necessary changes to the Logic App for Managed Identity provisioning. 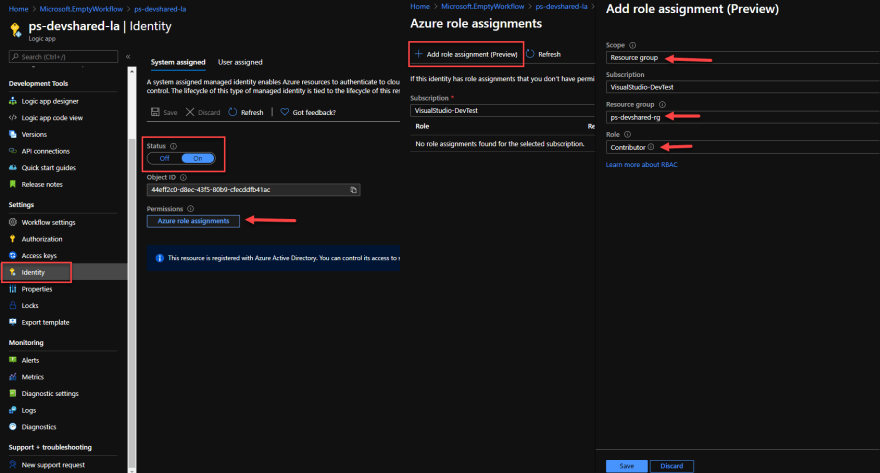 With the permissions in place for Logic App to access the resource group, let’s move on to Logic App Design to create the logic for deployment. Follow the steps below to build the logic. 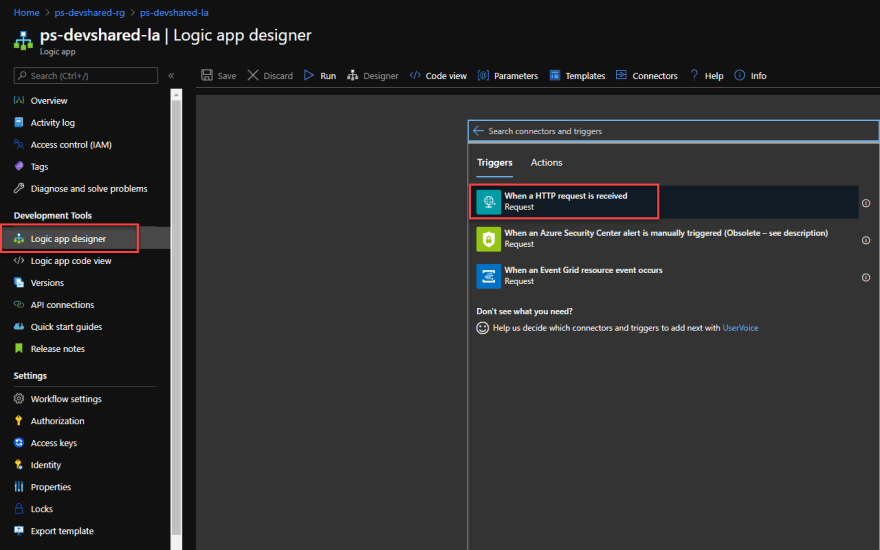 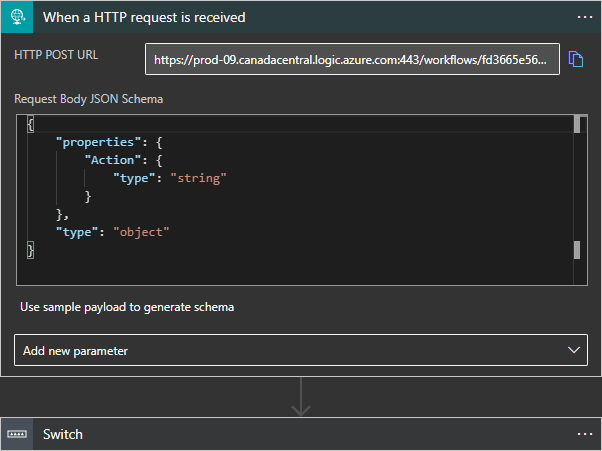 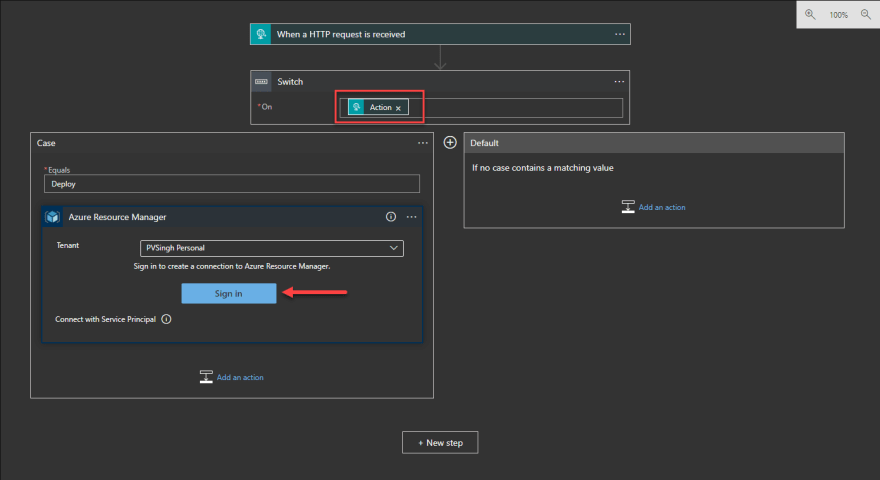 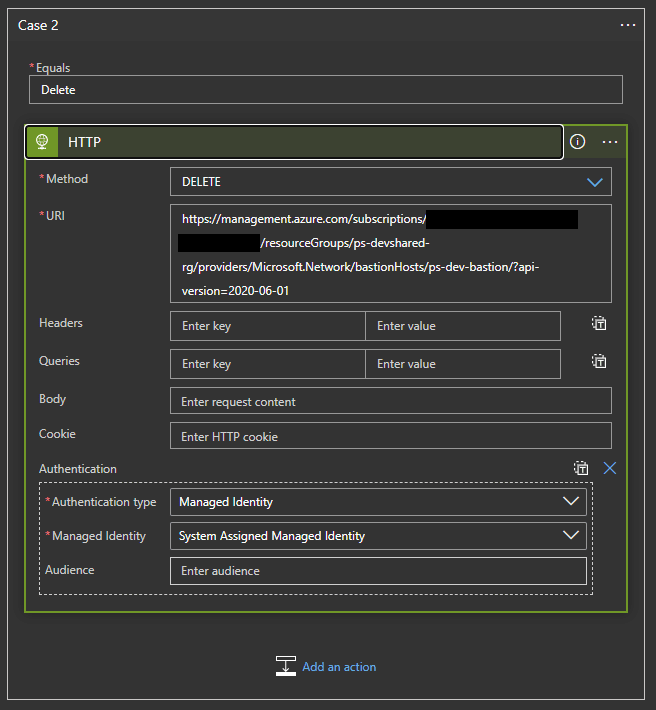 Now that you have the Logic App setup, it’s time to test the HTTP trigger. You need to use the URL that you get from Step 3 of Creating the Logic App. You can use either cURL or PowerShell to test the logic app using the step mentioned below.

Run the following line in your terminal after replacing the RequestURL with the HTTP that you get from the Logic App. As you can see, the command pass Action: Deploy to the logic app as it's body, which triggers the resource build.

Replace the action value to Delete if you need to remove the resource after deployment.

If you prefer using PowerShell, use the following commands to trigger the logic app. Be sure to change the RequestURL with your own Logic App HTTP trigger URL.

Since you won't see any confirmation in the terminal itself, you can however refer to Logic App Run history to see the triggers. Navigate to your Logic App and you should be able to see the "Runs History" on the bottom of the screen with it's run status. You should refer to this to troubleshoot any failed runs by selecting any of the triggers and looking at the workflow. 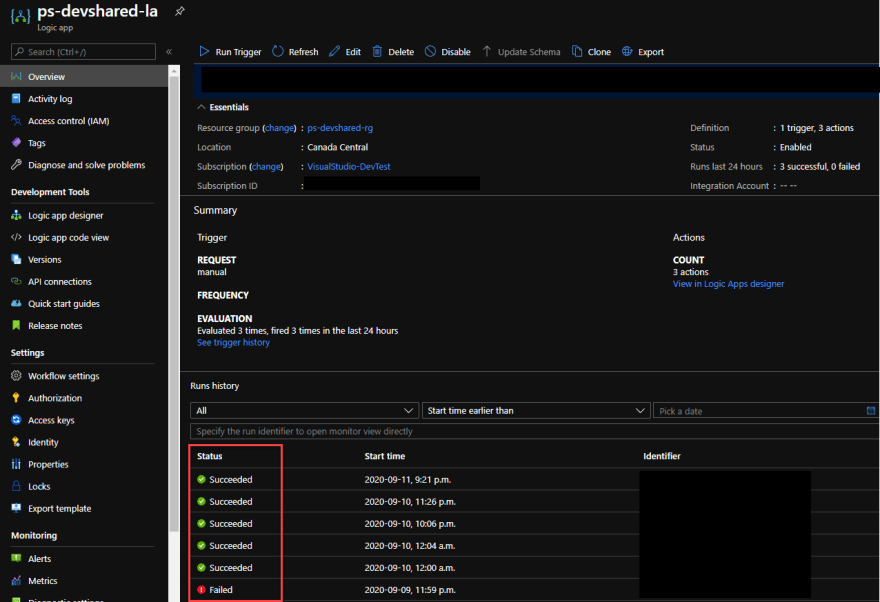 As a successful trigger runs, you should be able to see the resource deployed and getting updated as shown in the screenshot below.

As you can see that the price difference is nearly 4 times the amount you'd be paying otherwise by leaving the resource running 24 x 7.

Despite the fact that you have to work in browser session to access your VMs, I still think it’s secure and easiest way to access your cloud resources just with a single click without opening SSH and RDP Ports on individual VMs. You can drastically reduce the overhead of managing security groups for access policies or assigning public IPs to your VMs by using Bastion Service.

I hope you get some value out of this article. Please comment below for any queries.

What is Azure Arc ?

What is HostProcess containers in AKS?.

Once suspended, parveensingh will not be able to comment or publish posts until their suspension is removed.

Once unsuspended, parveensingh will be able to comment and publish posts again.

Once unpublished, all posts by parveensingh will become hidden and only accessible to themselves.

If parveensingh is not suspended, they can still re-publish their posts from their dashboard.

Once unpublished, this post will become invisible to the public and only accessible to Parveen Singh.

Thanks for keeping DEV Community safe. Here is what you can do to flag parveensingh:

Unflagging parveensingh will restore default visibility to their posts.