TLDR
Support is still experimental. Most things work as expected out of the box with a Front End application, but it had a lot of issues with Node libraries and while testing with Enzyme.

You can use them right now, but we are not there yet.

As an ever learning developer, I'm always trying to keep up with the latest ES features and all relevant technologies on the web.

I want to tell you about two pet projects where I tried to use them and the problems that I've encountered.

So I tried to migrate my app from create-react-app to something that used Parcel and supported ES Modules out of the box. Everything worked great, I just changed index.js to index.mjs. I feel like living in the future, and this is what my project looked like: 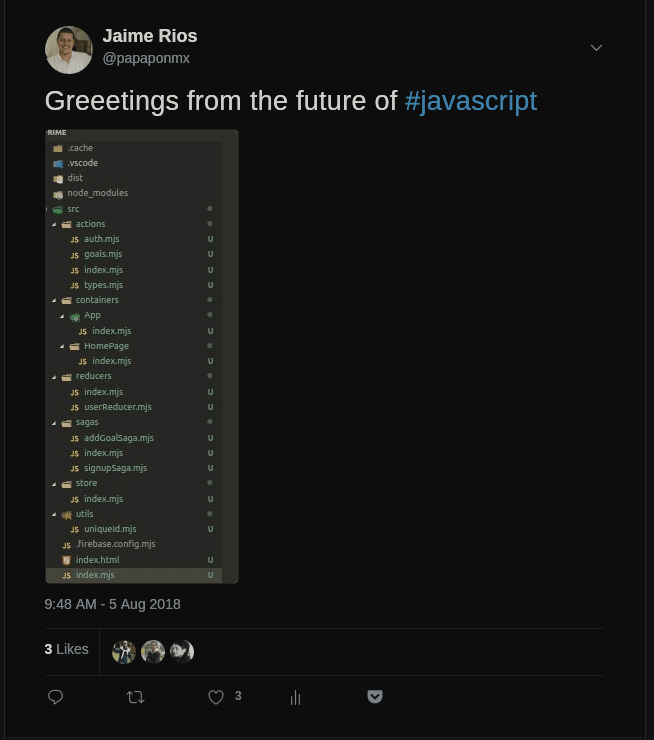 The problems arrived when I tried to integrate unit tests, I'm not sure if there is something wrong with Jest or if Parcel requires some additional configuration. What bugs me is that it is supposed to be a Blazing fast, zero configuration web application bundler, for the most part if is. I gave it a day, and I wasn't able to solve it, so I decided to move to react-boilerplate, which I really loved.

Proyect 2 The app for my puppeteer series blog post

Here is the post link if you are curious.

If you haven't checked it out, it is a NodeJS application that is meant to run on a desktop or CI server in order to do visual regression tests. According to this post, you might not need any webpack nor RollupJS anymore.

Double checking the documentation, since Node v10.x there is experimental support. If you don't know what that means, here's a link with the explanation.

Anyway, the only thing needed is to add a experimental flag, the command looks something like this:

So again, all the files you see in the repo, used to be ES Modules, but I had a problem trying to implement pixelmatch. Now don't get me wrong, the library is awesome, the problem is that ES Modules support is still experimental. The problem was that the exports where not being recognized as such within my index.mjs.

It was a nice experiment, I think using ES Modules is generally OK for most simple applications, they play nice with React, Parcel and most modern browsers in general, but if you have some external libraries it might break.

I would recommend it for pet projects, but not for the core of your next SaaS startup, not yet. Have you tried this or any other experimental features? How did it go?

Thanks for reading guys. Cheers.

Add storybook.js to a sveltekit project

Jaime Rios
I teach aspiring devs how to code modern Front End Applications in a way that is easy to understand so they can get their first job in tech.
Array.reduce() for newbies
#javascript #webdev #codenewbie #beginners
As a BackEnd Dev, what is your biggest struggle while learning Front End Technologies?
#javascript #discuss #career #learning
Solving my own problem with Software
#showdev #react #javascript #webdev