A variable is a placeholder ( a name, a label, a tag) given to an address ( a memory location) of a value in memory.
You can think of a variable as a box, which has a name. This box will have a value. Whenever we reference ( call) this variable ( name of the address), we then get the value stored at that address.
To create a variable and assign it a value, all we have to think about is an equation.
Eg: x = 2 . x is the variable ( the placeholder) that points to the address of the value, 2. So 2 is the value. A single ( one) equal-to sign, =, is known as the assignment operator. It takes what is on the right ( the value) and assigns ( puts) it into what is on the left ( the variable).
In Python, the data type of a value is controlled dynamically ( meaning as the program runs) so we don't have to worry about it ( memory management). 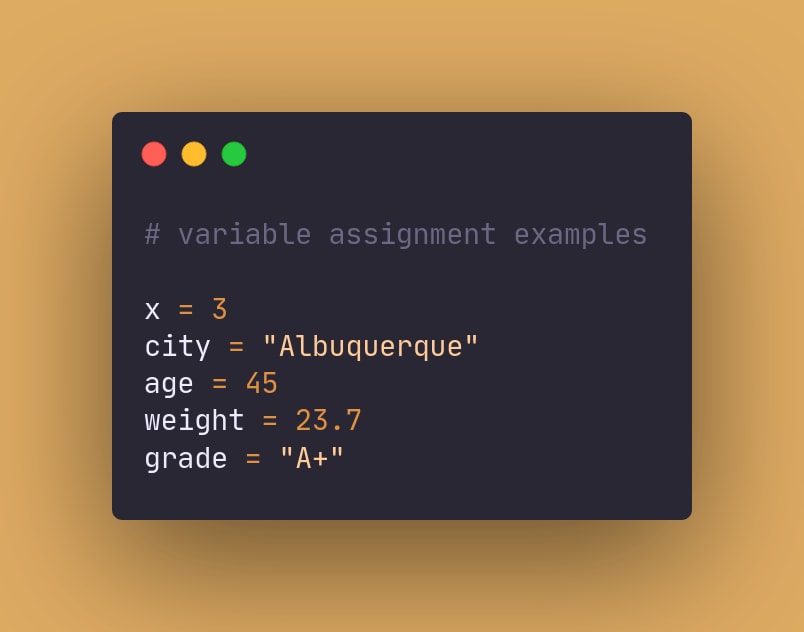 All these are examples of variable assignment ( variable creation) of different data types.

Once suspended, otumianempire will not be able to comment or publish posts until their suspension is removed.

Once unsuspended, otumianempire will be able to comment and publish posts again.

Once unpublished, all posts by otumianempire will become hidden and only accessible to themselves.

If otumianempire is not suspended, they can still re-publish their posts from their dashboard.

Once unpublished, this post will become invisible to the public and only accessible to Otu Michael.

Thanks for keeping DEV Community safe. Here is what you can do to flag otumianempire:

Unflagging otumianempire will restore default visibility to their posts.