Sometimes you just come across something brilliant and wonder
"why did I not think of that?". Such discoveries humble you but also if you are like me, makes you realize you need to think out of the box next time. "Out of the box" here just means think fresh. Because when you are stuck with a problem, the last thing you need to do is trying to solve it the same way again.

So I am getting deep into functional programming. I am having blast. Been a while since I had so much fun coding. But I had a problem. I cannot do recursive functions. I know how to do them, but typescript complains that the function refers to itself.

So at first I was like ha, must be a limitation of typescript because you can do this in javascript without any problems right? Ah javascript you got my again, with your smooth talking lies.
Nope, I suddenly realized what the word 'stackoverflow' meant. In brief, when you call a function, that function creates a 'stack'. It is memory where the parameters and some other stuff live until the function finishes execution. But when you call the function recursively the stack just blows up after a number of recursions, causing a runtime error.

I tried a few ways to create a workaround, but none worked in a way I wanted or at all.

But recently when I was not even looking for this I came across a technique called 'trampoline'.

Here's the implementation I found: source

I made some modifications, because why not XD. 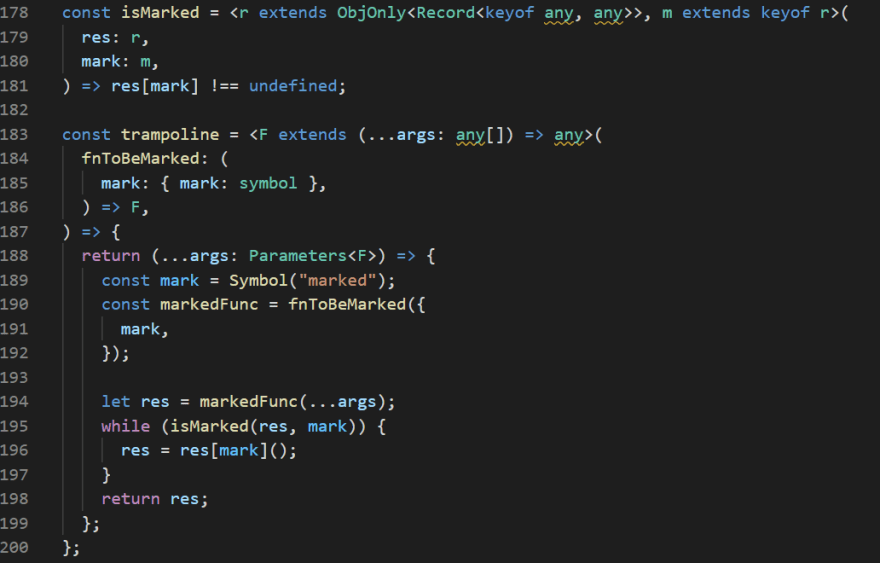 I made the modifications because, (nothing against the source, its a great example to explain the concept)

So with my modifications this is how a recursive function is defined, (there might be a better way, but its best I could create right now)

I already have a couple of changes I might want to do to this, but I am so glad that I came across this concept that I just wanted write down my thoughts in the post. Maybe someone else who never knew this found it through me. That would be my pleasure !

How To Add A Chatbot To Webflow

oreychandan
Heyo there! I am chandan. An artist/creator and dev. Which is my hobby and which is my full time gig? Only time will tell. Over here on dev.to you can follow my dev journey.
partial functions you say?
#typescript #functional #elm #beginners

Once suspended, oreychandan will not be able to comment or publish posts until their suspension is removed.

Once unsuspended, oreychandan will be able to comment and publish posts again.

Once unpublished, all posts by oreychandan will become hidden and only accessible to themselves.

If oreychandan is not suspended, they can still re-publish their posts from their dashboard.

Once unpublished, this post will become invisible to the public and only accessible to oreychandan.

Thanks for keeping DEV Community 👩‍💻👨‍💻 safe. Here is what you can do to flag oreychandan:

Unflagging oreychandan will restore default visibility to their posts.