Recently I was working on a project with Angular 7 when a teammate told me about a problem he had within a component, the problem was that he subscribed to an observable returned by one service implemented in the application and within the callback in charge of receiving the values did not have access to an attribute defined in the component. 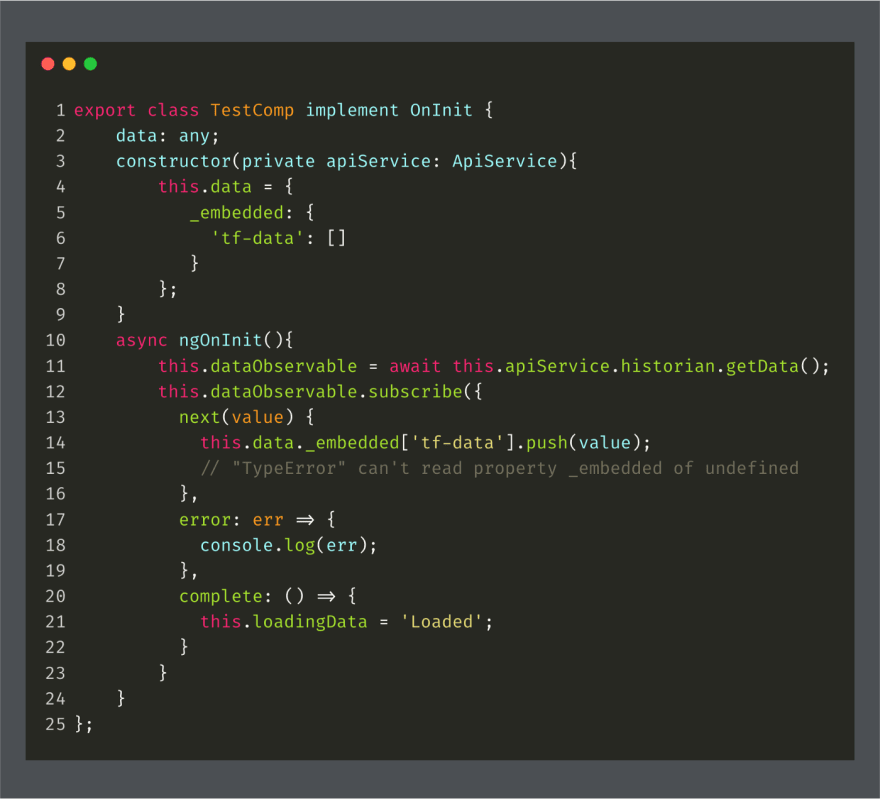 Specifically, the problem was on line 14 that data isn't defined as property of this 🙄🤔.

After analyzing the code I told him that the problem wasn't related to Angular, and to understand the cause of it he should know how this binding works in JavaScript. A few days after I told about this error to another colleague, and while I explain it I realized that he also didn't have a complete understanding of how this work.

Currently JavaScript is within one of the most used languages worldwide, I think it's very common to find developers working with JavaScript that use this without really understanding the basics of this feature that the language provides us. I think this is largely due to the introduction of pseudo-classes in ES6, since they try to imitate a similar syntax for the definition of classes to that of other languages, and therefore less experienced developers tend to associate this in the same way that it works in other programming languages (my colleagues had worked with PHP and C# respectively).

The keyword this in JavaScript is automatically defined inside of the scope of any function f, and within each f we have that this represents a given object. The problem really with this is that the object represented is not defined by the way we implement the function, but is defined dynamically at run time depending on how we call the function, that is, the object represented by this hasn't nothing to do with where f is declared, but it has to do with the way f is called.

Simplifying we can say that the interpreter uses 5 rules to determine the object that this represents within f, we will explain each of these rules and then define their precedence levels.

The first rule that we will examine is the simplest of all, and applies whenever one of the others is not applicable, so we can also say that it is the rule of least precedence.

The default binding is applied when a function f is called in the form f(). When this rule is applied this points to the global scope, note that this has the consequence that if we modify this within the function for example by inserting some property it will be accessible even after executing the function because it would be defined globally, for example: 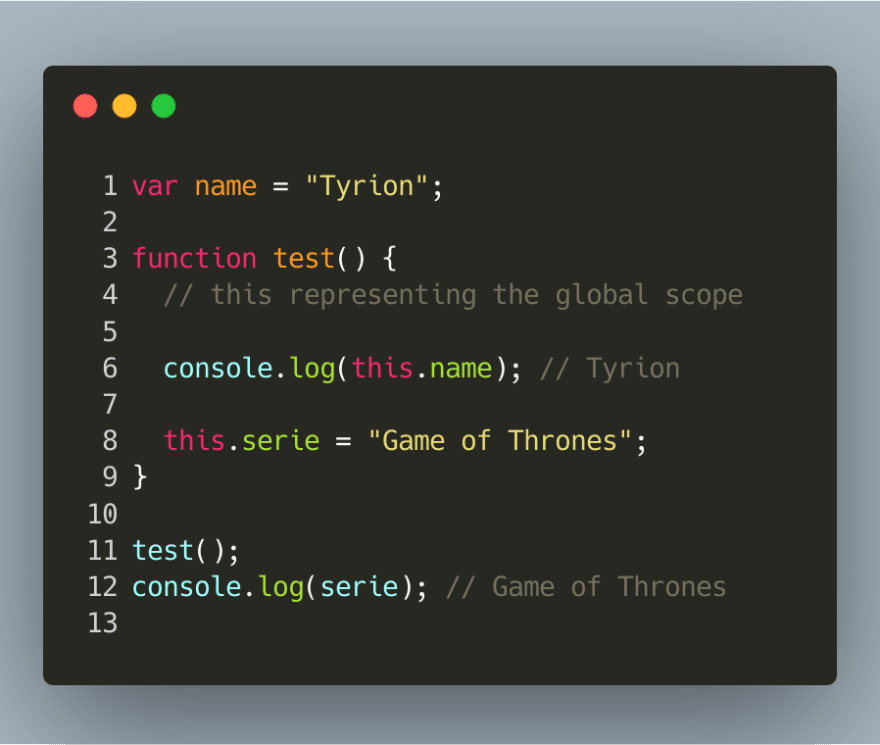 It is valid to clarify that the variable name within the global scope is accessible only in the case of browsers, for the case of Node on line 6 it would have been printed undefined

In the previous snippet it is exemplified as this points to the global scope.

In the case that we execute our script in strict mode at the time of applying the default binding the interpreter doesn't allow this to represent the global scope, therefore this will point to undefined. The previous snippet running in strict mode throw the following error:

The second rule or implicit binding is applied in the case that a function f contained in an obj object is executed using dot notation for its execution obj.f(), example: 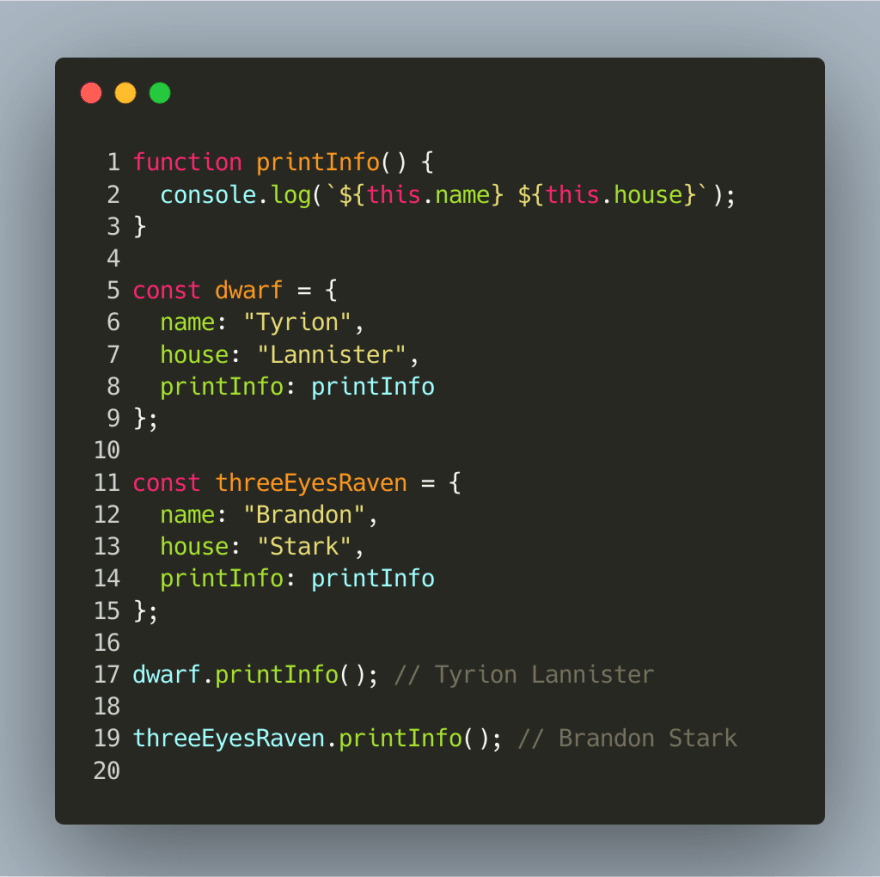 In the previous example we see how both objects contain printInfo property that refers to the same function, but despite this when executing the function in one case this represent the dwarf object, while for the other it's threeEyesRaven. This is because in each of the calls to the function an object is used, which we can name as context, in this case the implicit binding define that within the function this points to the context object, therefore saying this.name would be the same as saying dwarf.name or threeEyesRaven.name depending on the object used in the call.

It's very common for some developers to lose at some point in the source code the implicit binding defined for some specific object, which means that the binding that is applied would be the default binding having this pointing to the global scope or undefined. This can happen when we use callbacks, for example: 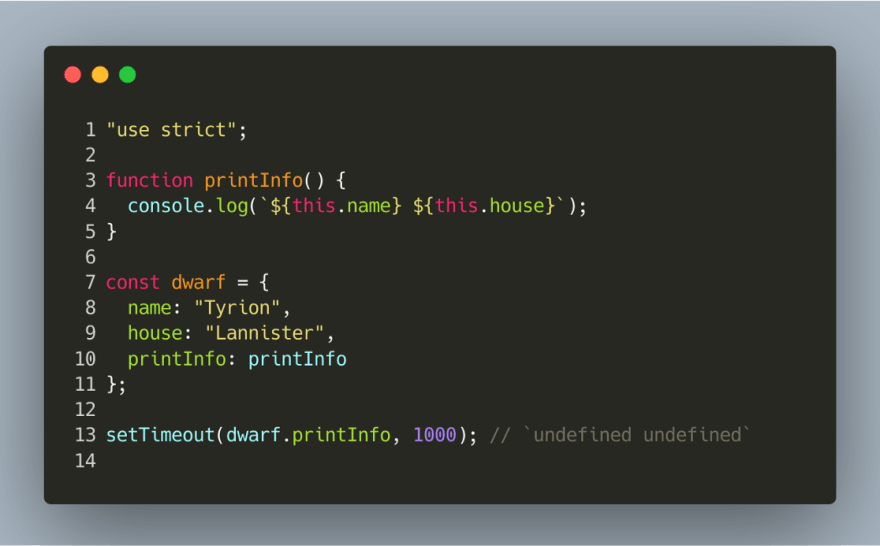 What happens is that here we are passing directly to setTimeout a reference to our function printInfo without passing the object where it's contained, on the other hand we have no control of how setTimeout call the function, to better understand what happens suppose this pseudo implementation of setTimeout: 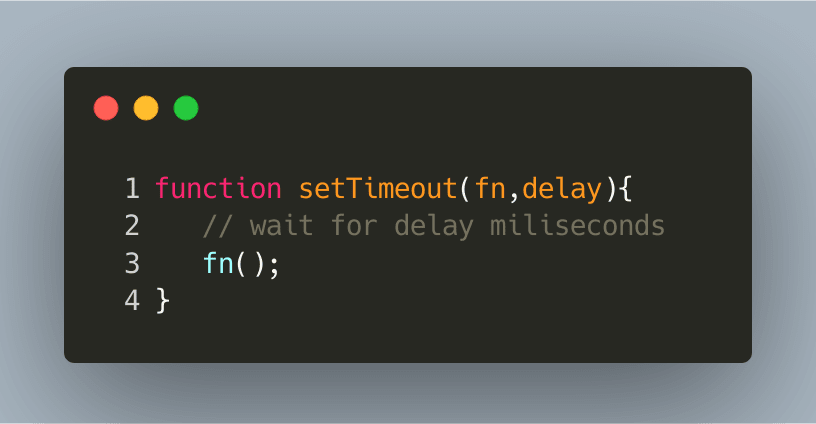 Analyzing the call-site of fn in the previous snippet is easy to conclude that the default binding is applied and the explicit binding that was previously available is lost, because dot notation isn't used to call the function.

So far we have seen 2 rules to determine the value of this within a function, the first applies when we call the function as standalone function and the second when the function is executed by accessing it as part of an object.

Next we will see another type of binding for the case in which we explicitly define the object to which this points within a function, this type of binding is known as explicit binding.

To get into the explanation of this type of binding we must start talking about 2 methods present in every JavaScript functions, these methods are apply and call. Both methods take the object to be pointed by this as the first parameter and then execute the function with this configuration. Because we directly indicate what will be the value for this when executing the function we are in presence of explicit binding. For example: 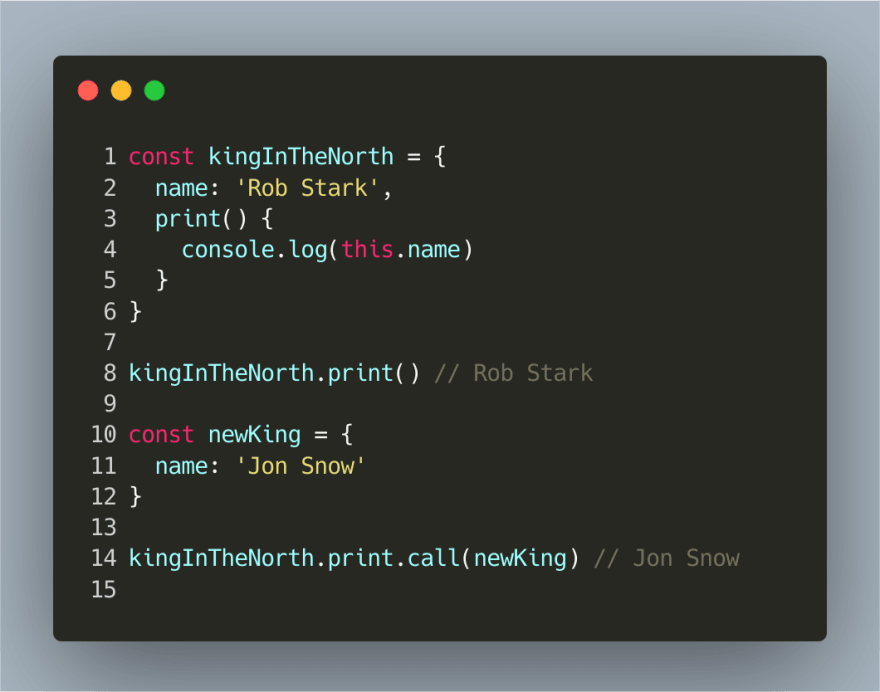 In the previous example, we noticed how the first time we executed the print function, it print "Rob Stark" because that is the value of the name property of kingInTheNorth object which contains the print function and therefore applying the implicit binding when executing the function this will point to the object. The second time we execute the function then "Jon Snow" is printed instead of Rob Stark even though we are accessing to the same function contained in the kingInTheNorth object, what happens is that in the function's call-site we are calling the call method and explicitly indicating that the function is executed using the newKing object as this, so in that case within the function this.name refers to newKing.name.

Sometimes is desirable to indicate this for some function without executing it. For this case, each function has a bind method which, like apply and call, takes as its first parameter the object that this will represent but instead of executing the function bind returns a new function with this already linked to the specified object, let's look at the following example: 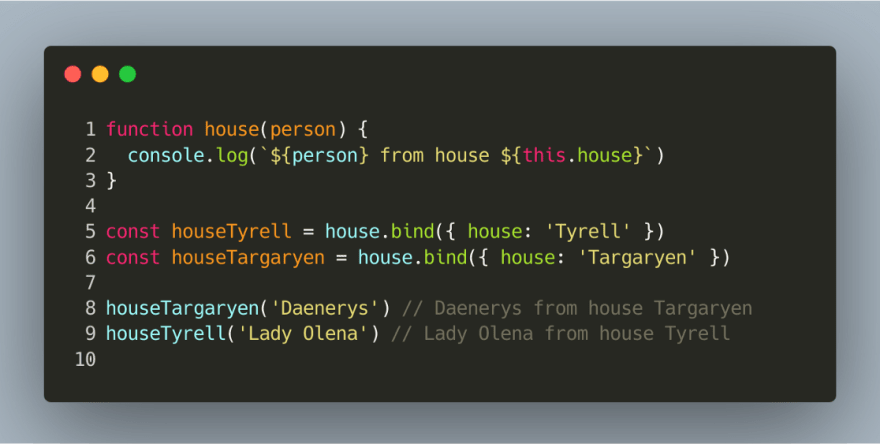 To understand the new binding we must know what happens when a function is called preceded by new, in this case the following occurs:

For simplicity, let's completely ignore the step 2 it and let's focus on the others 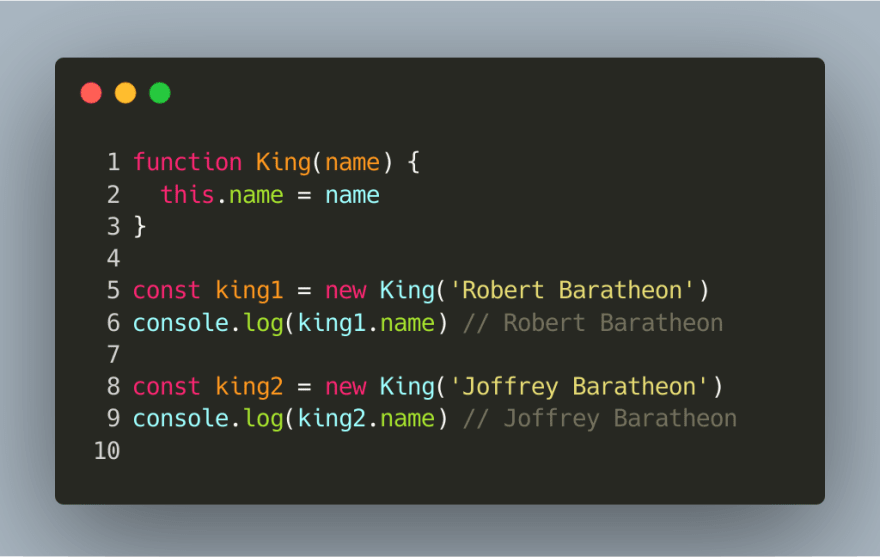 Here we see how each time the function is invoked using new, a new object is created on each call, this object is automatically returned from the King function even though it doesn't have return statement.

Currently the vast majority of developers don't use new to execute functions but when invoking es6 classes, in this example a function were used because we are analyzing the behavior of this within functions , although classes are at the end functions as well 😎😉.

A new way of declaring functions was introduced in ES6(arrow functions), to declare a function in this way we use the operator =>, for example: 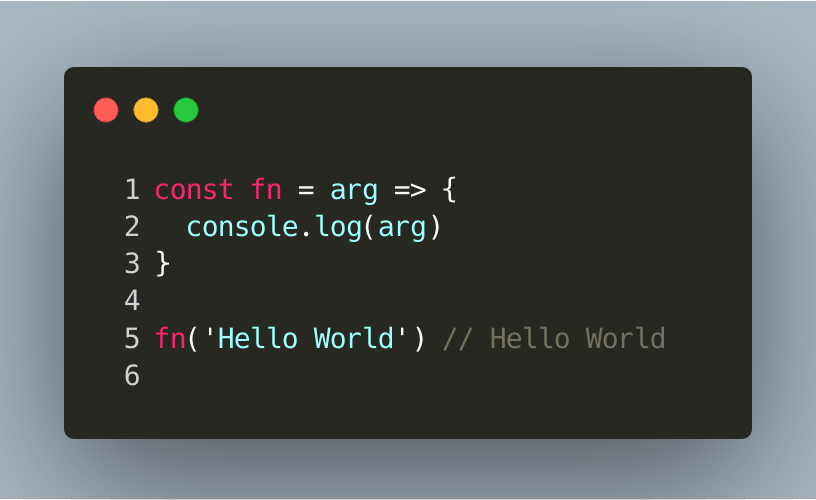 One of the features of this approach is that the functions alter the behavior of this, so that it's not dynamic depending on the function's call-site, but is lexical. In a simplified way, this within an arrow function represents the same object that it represented in the parent scope that contains the defined function, that is, the arrow function inherits this from the enclosing scope, example: 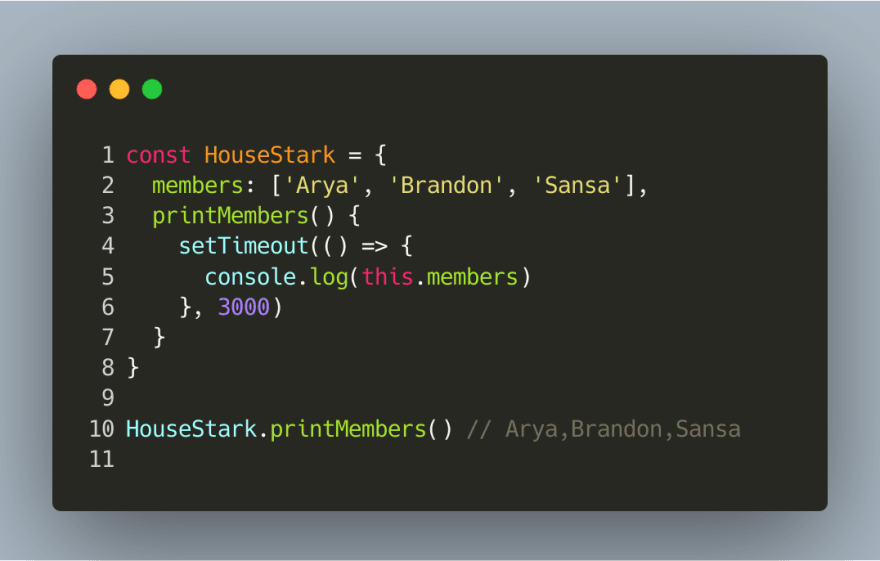 Observe that when the timer is executed we don't lose the reference of this pointing to HouseStark object, which happens in case that we pass an anonymous function function(){} to setTimeout, the above is because we are using an arrow function as timer first argument. The parent scope in this example is defined by the printMembers function, when executing this function from the HouseStark object, the implicit binding is applied and this will be the object itself, as a consequence then this within the arrow function will be HouseStark object so we can access to all its properties without problems.

To know what this represent within a function we first find the call-site of that function, remember that this depends directly on the way in which the function is executed, then we follow this steps:

As a recap we can say that this in JavaScript is dynamically defined at run time, depending on the call-site of a function. There are 4 different types of binding. Using arrow functions we can say that it would not have its own this but inherits it from the enclosing scope.

Now that we have talked in detail about this , would you know what is the problem in the code published initially 👍

Any recommendations do not hesitate to leave your comments, thank you for read

Once suspended, omenlog will not be able to comment or publish posts until their suspension is removed.

Once unsuspended, omenlog will be able to comment and publish posts again.

Once unpublished, all posts by omenlog will become hidden and only accessible to themselves.

If omenlog is not suspended, they can still re-publish their posts from their dashboard.

Once unpublished, this post will become invisible to the public and only accessible to Omar E. Lopez.