Photo by Alexander Schimmeck on Unsplash

Let's explore how we can implement an algorithm that allow us convert a decimal number in it's roman representation. I like functional programming(FP) so also during the implementation I want use common concepts from FP like pure functions and function composition , so hopefully this also serve as example to show how you can apply FP to problem solving.

We will develop a simple converter function that will receive a decimal number as input and output the roman representation of our input, for example:

Before deep dive in the implementation, let analyze step by step our conversion algorithm.

First we should know what characters we have available in the roman numeric system and the decimal number that every one of them represent,we have the following set of characters:

As you see I represented some decimals using two letters example CD, this is in order to avoid in our algorithm the subtractions that take place in the roman numeric system, think as this 2 characters as a whole that is associated with a decimal value

The next step is for every decimal number try to decompose it as a sum, using only the decimals number exposed previously, we should use the minimum number of operands in our sum, let's see:

As we can see, from this decomposition is very straightforward get the roman representation. So this is how our algorithm work, it will go from top to bottom over our available decimals and check if the roman token associated with it should be in our final representation and how many times we should include the respective token.

Our algorithm will build the roman number in an incremental way, for check how many times a specific roman token should be present we use the / operator in conjunction with the decimal representation of this token against our input, the % operator is used in every step to get the remain that we will use as input when processing the next roman character, as we know an example is worth than thousand words so let see how we can transform 38: 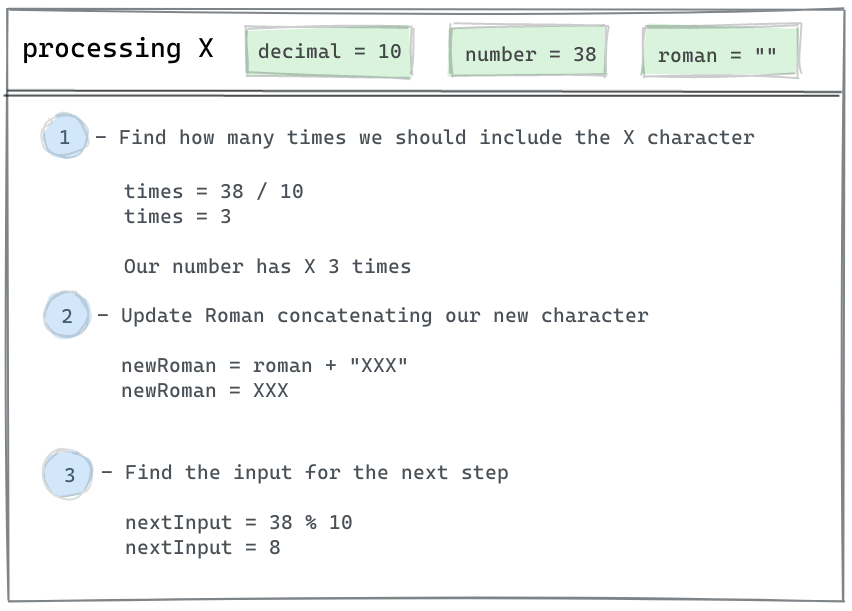 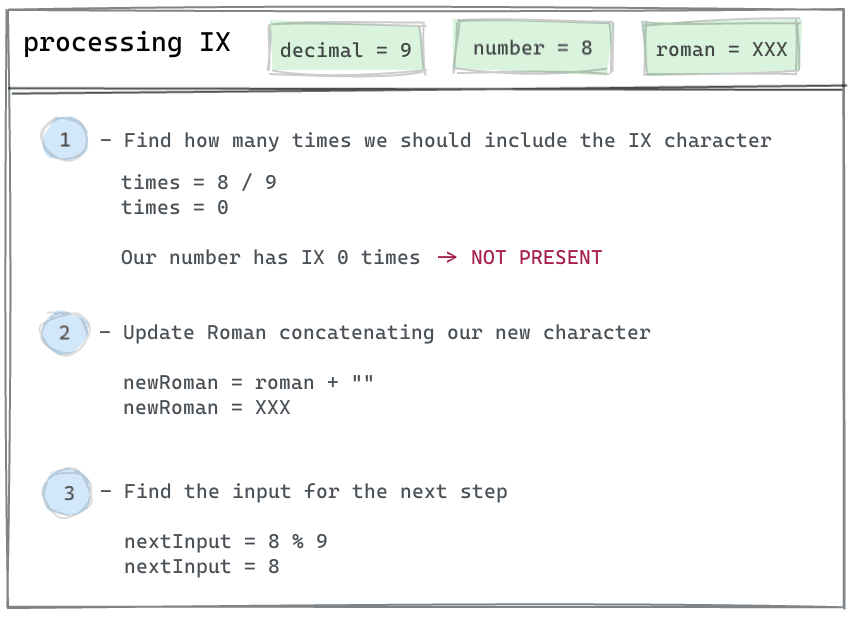 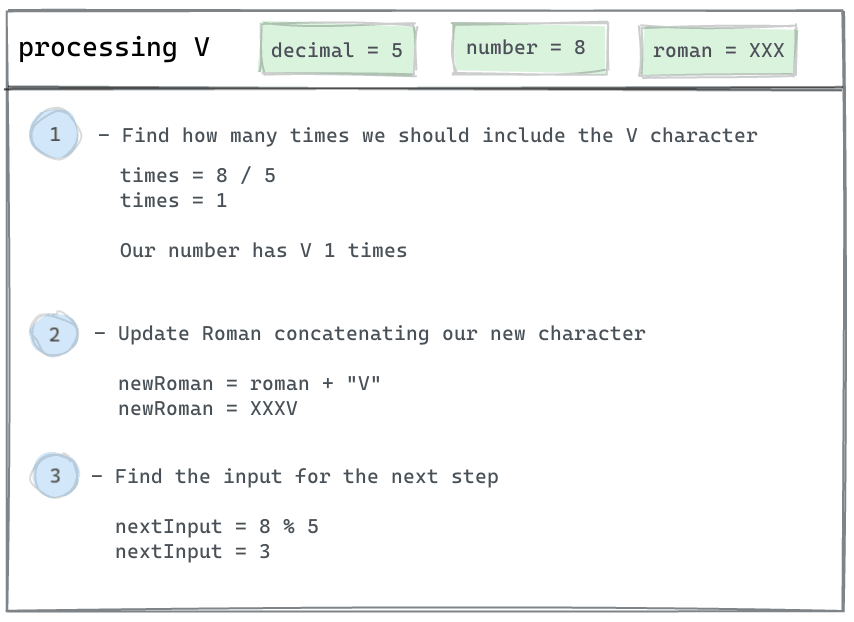 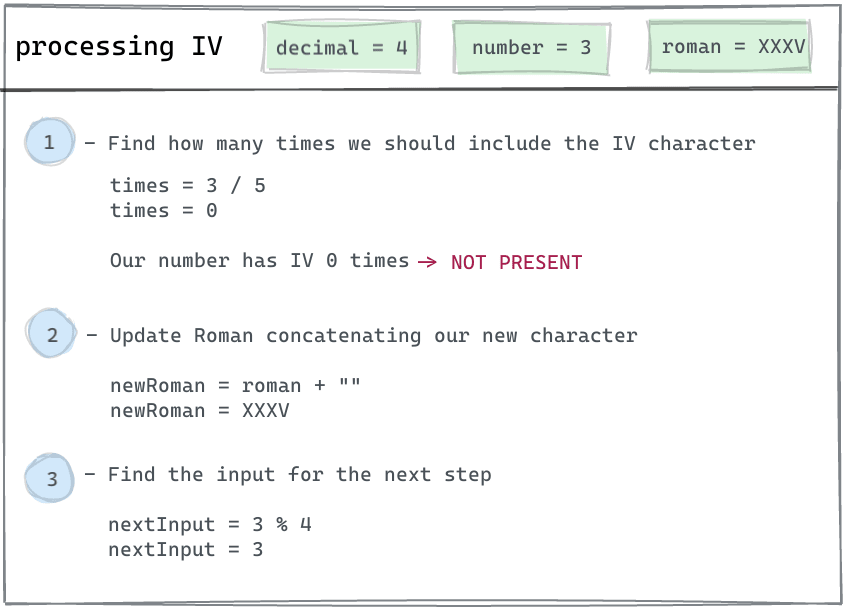 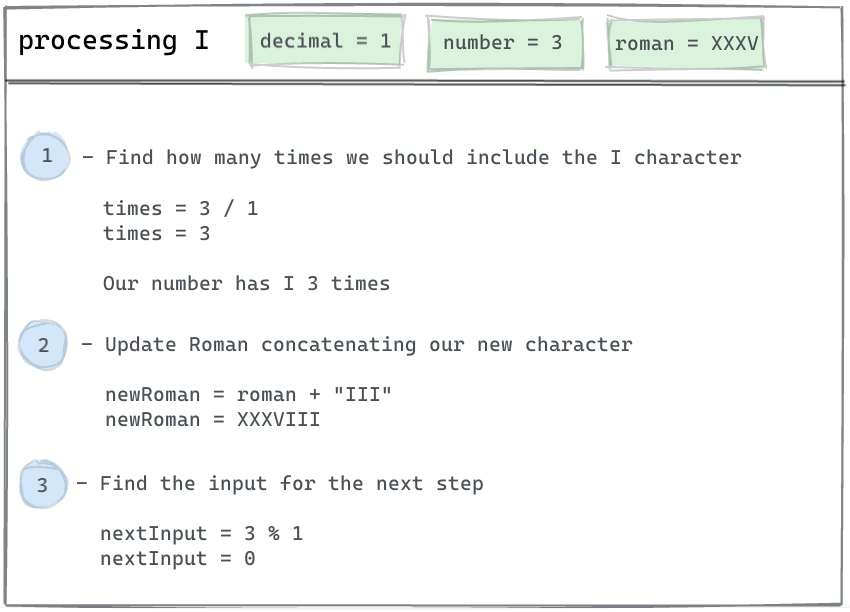 Note the following in our algorithm:

Now that we saw how the conversion algorithm works let's go through it's implementation.

First I will start implement some utility functions that we will use.

As in every step / and % operations are used let's start implementing a function that help us with this task:

We need a function that allow us repeat a character a specific amount of times:

As I mention earlier we will use function composition in the implementation, for this let's use a pipe function. With pipe we can for example write g = arg => f2(f1(arg)) as g = pipe(f1,f2), in this example g is composed by f1 and f2, the out of f1 is passed as and argument to f2:

Now let's see the implementation, we know that during the conversion we did the same operation in every steps over our input, the only thing different was the roman character and the decimal that is represent. With this in mind let's build a process function that receive as arguments a romanChar and it's decimal representation and return a function F that will be responsible to run the conversion algorithm:

Ok until this point we have our process function that allow us check if a specific roman character should be present in our final transformation for example const f = process('V', 5) give us a function f that should receive our arg object and determine if V should be included in our final solution.

The last step is create a converter function composing different function where each one has
only the responsibility to check one character, our transformation will be passed from one function to another.At the end we end with an object which num is 0 and roman is the full conversion,

Note how our convert function receive a number and in the first step(first function) we transform it to our arg shape so we can start the conversion, also in the last step we get our arg object and extract from it roman property with the full conversion.

As we stated at the beginning we used function composition, and pure functions in the sense that none of our functions rely on side effects, in every step we don't modify our arg instead we a create a new object, that will be passed to the next function in our chain.

This example is simple but I hope that it give you some insights on how you can use this concepts in your every day tasks.

This approach to build our convert function in a declarative way give us as advantage that is easier adapt to new requirements, for example our convert function can be refactored to work with numbers greater than 5000 only adding another call without modify our process function.