What is GitLab Runner

GitLab Runner is an agent that runs GitLab CI/CD (Continues Integration/Continuous Deployment) jobs in a pipeline. It's heavily utilized in the world of DevOps to provision and configure infrastructure. The GitLab Runner can be installed as a binary on Linux, MacOS or Windows. It can also be installed as a container.

On this tutorial, I will walk through installing and configuring GitLab Runner as a container using a Docker image on a RPI-4..yaay. I will make it very swift to get you started and won't feel a thing. I will not bore you with details, but if there are useful links for further study, I will definitely throw it in. The goal is to get you started with GitLab Runners and the rest is on you.

As a bonus, we will run our first job of building docker images and push them to Docker hub. Enough reading, let's get our hands dirty, I mean our keyboards 😉

Note: Sensitive information will be pixilated or erased. This should not alter the quality of the tutorial.

Run a GitLab Runner Container on a RPI-4

If you don't have Docker installed on your RPI-4, you may refer to my Docker on Ubuntu 20.04 Raspberry Pi 4 tutorial.

1- Let's create a persistent Docker volume for the runner. On your RPI-4 terminal, run the following command:

Note: you can change the volume name gitlab-runner-volume to any name of your chosen, but you should be consistent as we will use the volume name to bind the container to the RPI-4 local host.

2- Run the below commands to start GitLab Runner container:

The only parameters you have the options to change are:

For more information about the installation process, here is the link GitLab's official documentation.

We do need to head to our GitLab account and grab the runner's token. If you don't have a GitLab account, you can create one for free. Here is the link.

Now, we need to create a repository to host our project. From GitLab, let's click on create New project. On the Create new project, select create blank project. Then, give the project a name and click Create project. In my case, I named my repo, GitLab-Runner-RPI-4. 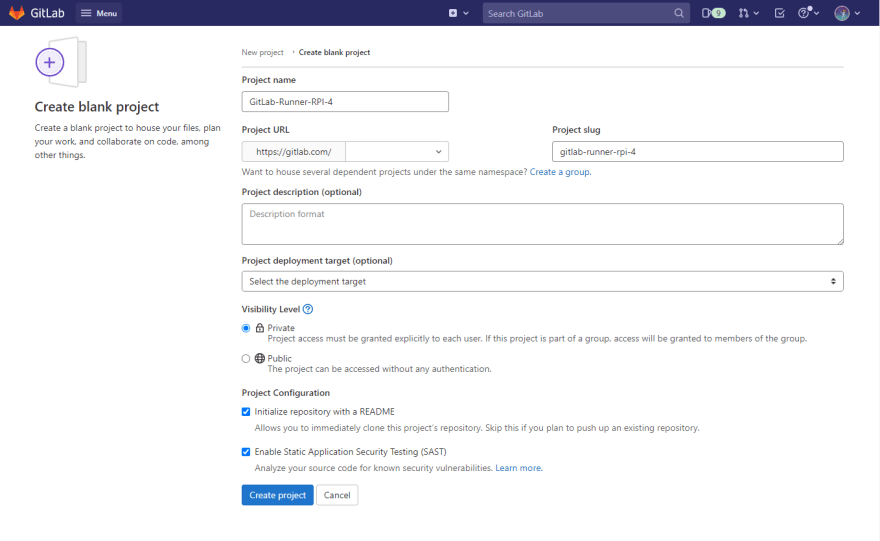 From the repository, let's click on settings, CI/CD and then Expand on the Runners section as shown below. 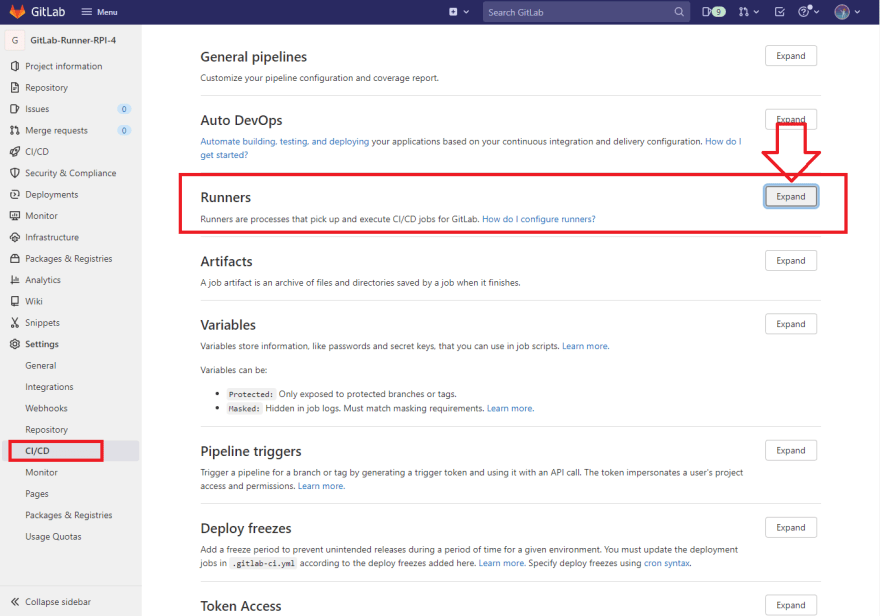 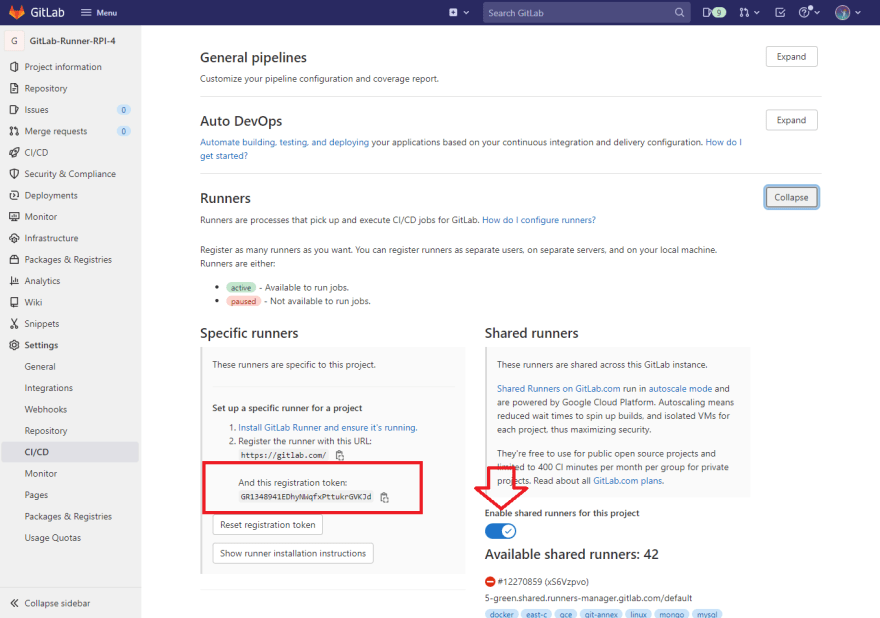 Replace the token place holder after registration-token with the one from our note pad, and then run the following commands on your RPI-4 terminal:

If everything went smooth, you should not exhibit no errors as shown below. 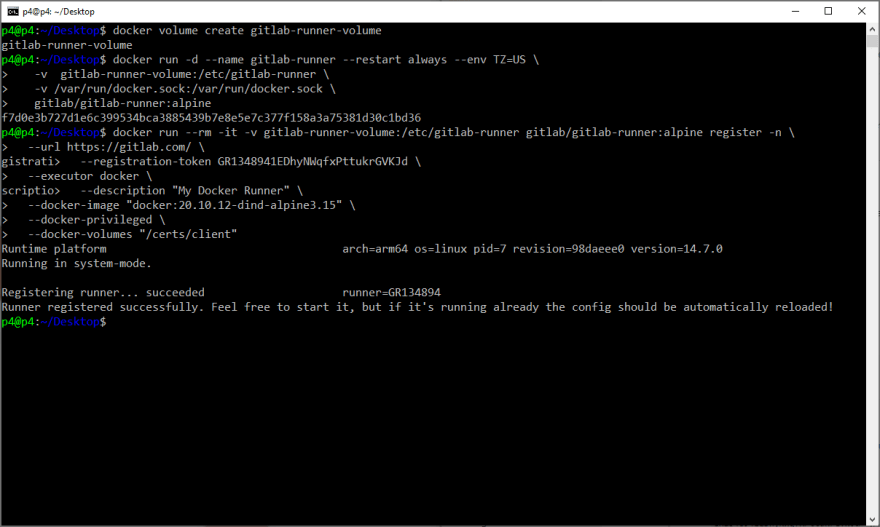 To confirm that the GitLab Runner container is running, run the below Docker command:

Alright, this is a great indication that we have successfully configured GitLab Runner on RPI-4. Now, we are ready to make some actions 💥

1- First of all, we need get a token from our Docker hub account to avoid using account password. The token is to allow GitLab Runner to authenticate and push Docker images to our Docker hub repository. If you don't know what Docker hub is, it is the world's largest library for container images.

On Docker hub account settings, click on Security, New Access Token and generate a Read, Write, Delete token. Docker hub free account allows for one active token. Capture the token and save to a note pad. 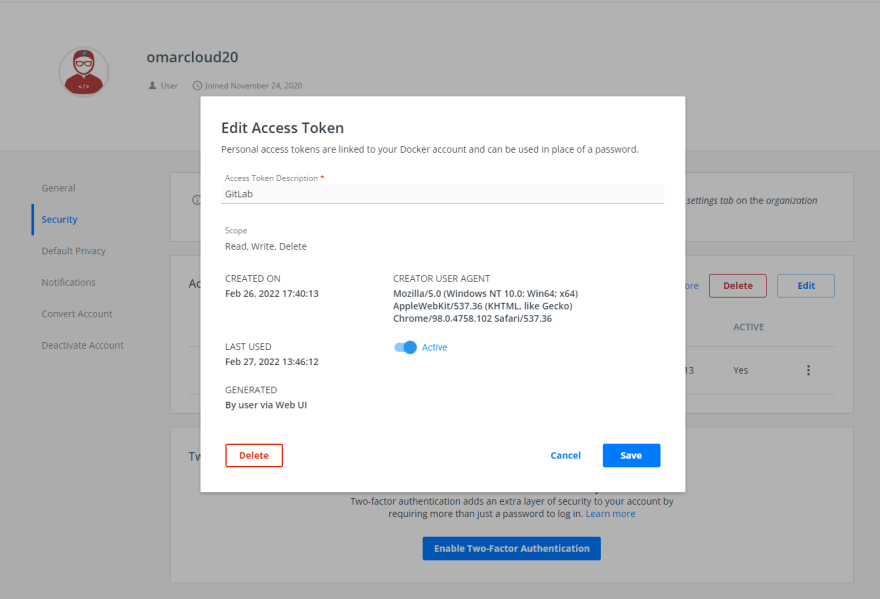 2- From GitLab repo, which have we have created previously:

Note: the git clone command will prompt you to enter your GitLab credentials for authentication. 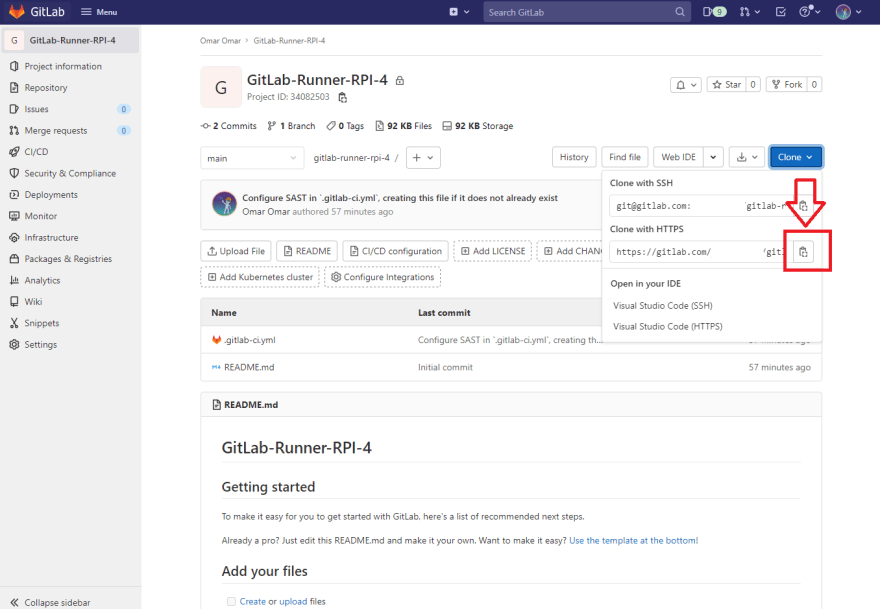 3- cd into the repo and either use a text editor or the terminal to edit the .gitlab-ci.yml file. The file should only contain the following code. Be very careful with the indentation. Lastly, save the file: 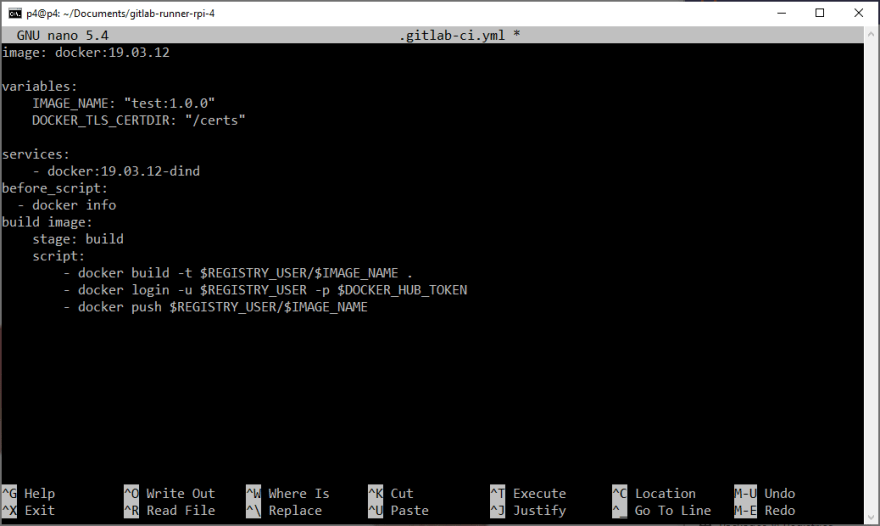 4- We will create a simple Dockerfile. The runner will use this Dockerfile to build a Docker image and push it to Docker hub. For right now, we will keep the Dockerfile VERY simple. Once the image is built from the Dockerfile, it will echo Hello World.
With your preferred text editor or terminal, create and name a file Dockerfile without any extension. Then save it in the same local repo.

Note: In the local repo, we should have two files, Dockerfile and .gitlab-ci.yml. A README file might be there as well.

Note: the flags should be unchecked for simplicity for the two variables. 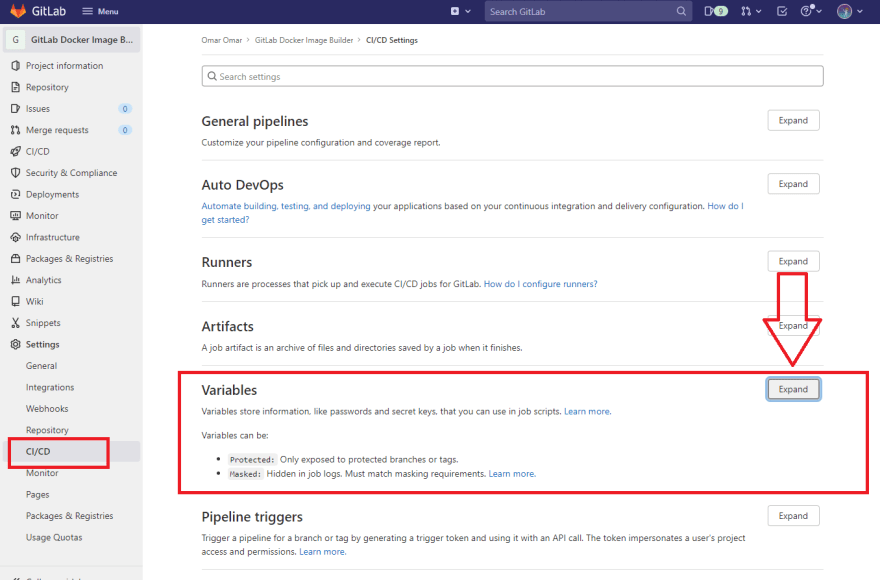 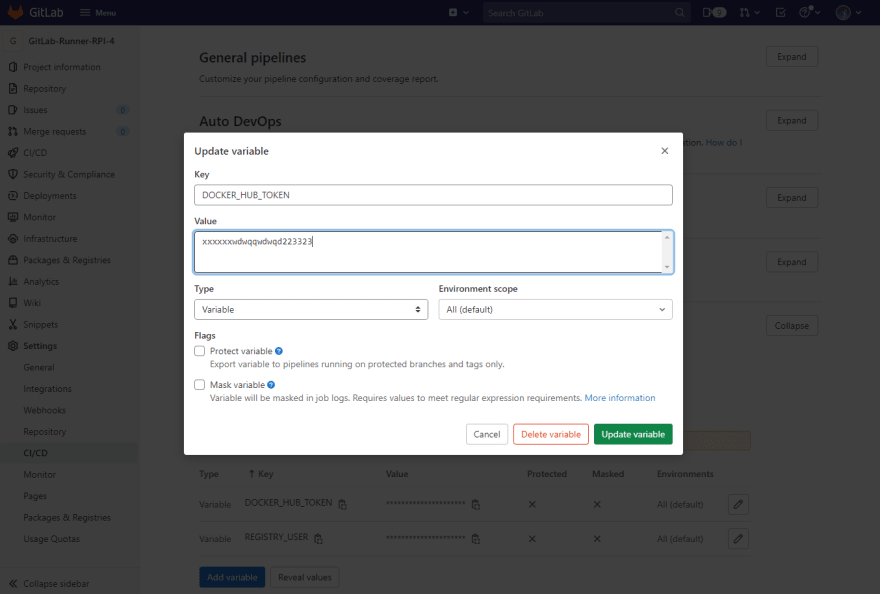 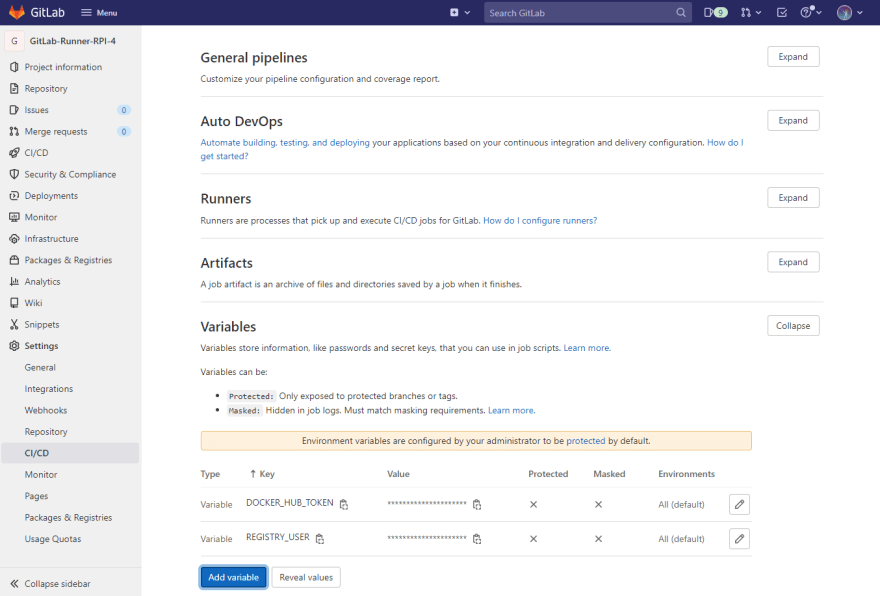 6- Now, we push the local repo to GitLab repo (remote repo) to start the GitLab Runner pipeline process. Yes, once the remote repo is updated, the runner will be triggered. Let's get back to our terminal on the RPI-4 and from within the local repo, run the following git commands:

If you head back to our GitLab repo and click on CI/CD under Pipelines, you would notice that the pipeline is running. 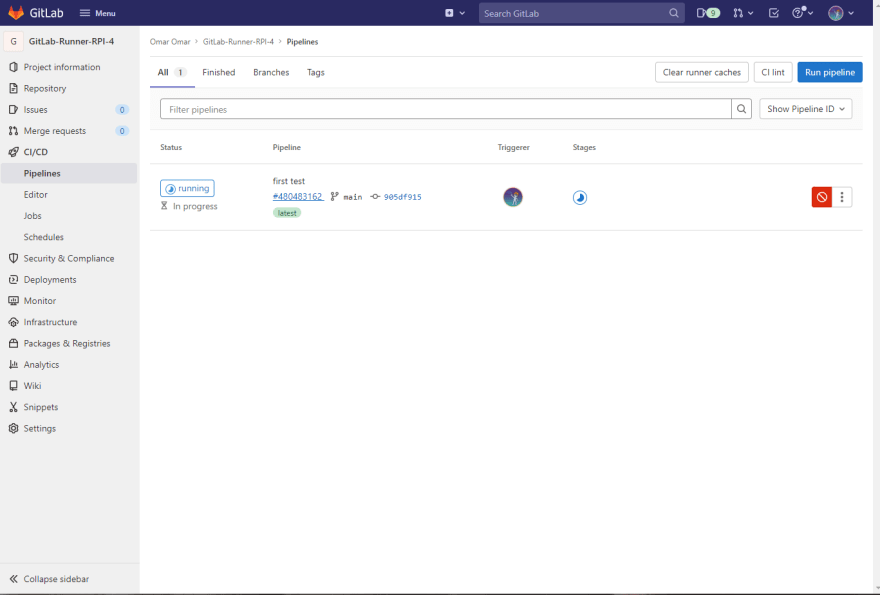 Moreover, if you click on the running status and you would be directed to the current stage, which is Build. 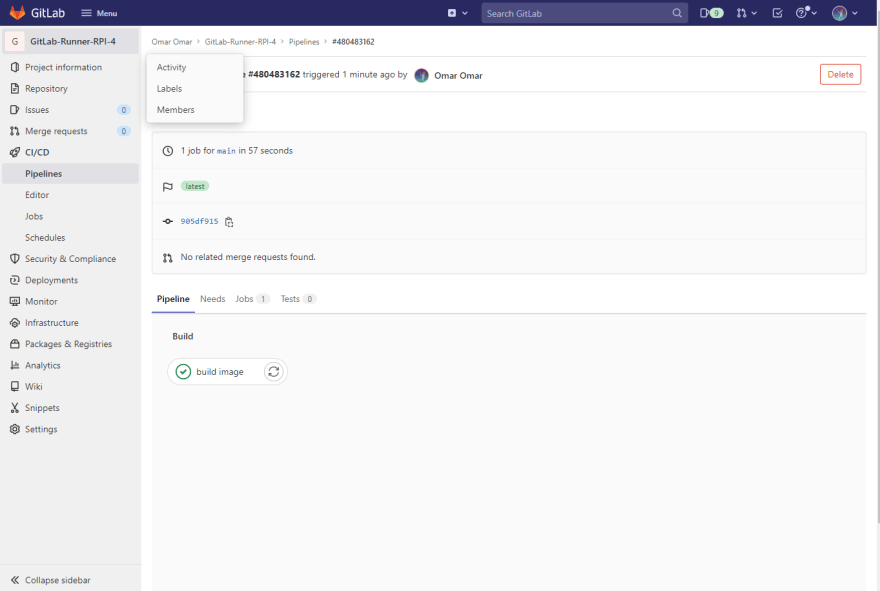 Here, click on build image, you shall see more details about the current build status. The goal is to see Job succeeded. 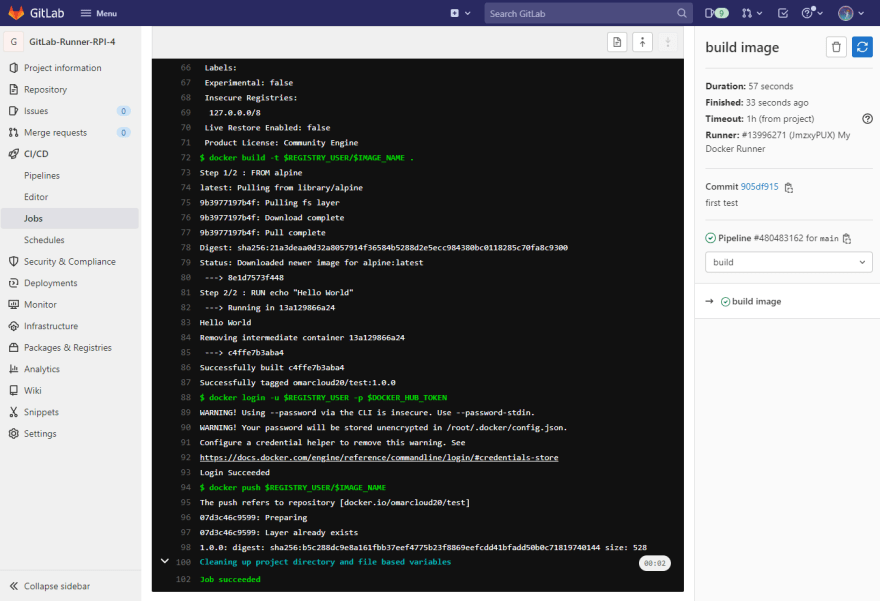 Once you see Job succeeded and passed status in green, you can start doing your victory dance 👯 👯 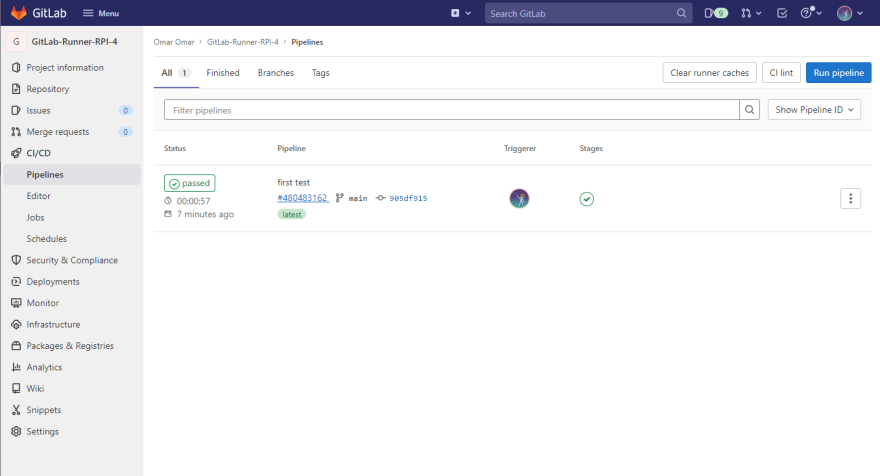 If we head back to Docker hub account, we should see that our Docker image test:1.0.0 has been successfully pushed to the repo.

By the end of this tutorial, we have successfully configured a GitLab Runner on a RPI-4, created a GitLab repo and registered GitLab Runner to it. Finally, we created a Hello World Docker image from a Dockerfile and had the runner building the Docker image and pushing it to our Docker hub account.
Now, off you go and the sky is the limit.

How to Design a Web Application Software Architecture

Azure-cli: Installing the tool on Linux

Once suspended, omarcloud20 will not be able to comment or publish posts until their suspension is removed.

Once unsuspended, omarcloud20 will be able to comment and publish posts again.

Once unpublished, all posts by omarcloud20 will become hidden and only accessible to themselves.

If omarcloud20 is not suspended, they can still re-publish their posts from their dashboard.

Once unpublished, this post will become invisible to the public and only accessible to Omar Omar.

Thanks for keeping DEV Community 👩‍💻👨‍💻 safe. Here is what you can do to flag omarcloud20:

Unflagging omarcloud20 will restore default visibility to their posts.