A Docker Compose file for five microservices might be around 30 lines of yaml, but the same application in Kubernetes would be 500+ lines of yaml and about 10-15 different files. Also, the Docker Compose CLI rebuilds and redeploys containers when needed. In Kubernetes, you need additional tools to build your images, tag them, push them to a Docker Registry, update your Kubernetes manifests, and redeploy them. It’s too much friction for something that’s wholly abstracted away by Docker Compose.

There are some use cases where running your Docker Compose files locally presents some challenges. For example, you might need to run dozens of microservices that exhausts your local CPU/Memory resources, you might need access to GPUs to develop a ML application, or you might want to integrate with a service deployed in a remote Kubernetes cluster. For these scenarios, running Docker Compose in Kubernetes is the perfect solution. This way, developers get access to on demand CPU/Memory/GPU resources, direct access to other services running in the cluster, and more realistic end-to-end integration with the cluster configuration (ingress controllers, SSL termination, monitoring tools, secret manager tools…), while still using the application definition format they know and love. 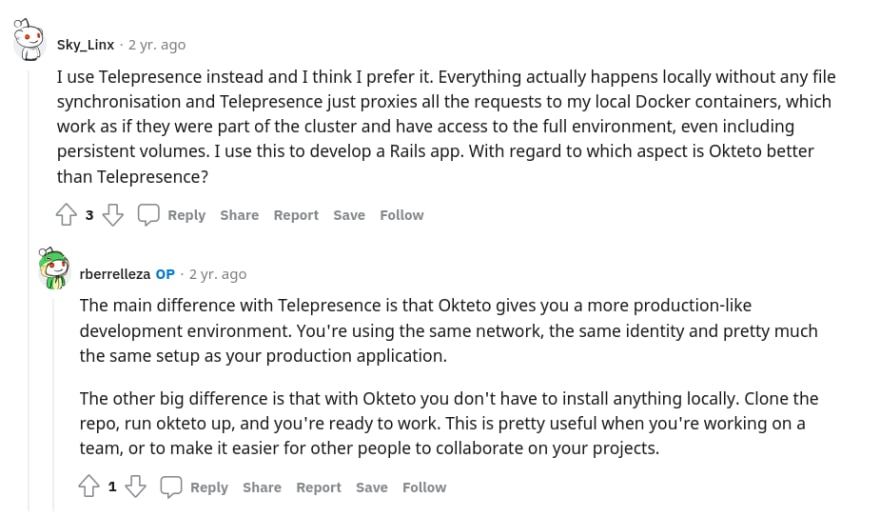 Okteto’s bidirectional synchronization is pretty handy: .it reloads your application on the cluster while you edit your code locally. It’s equivalent to mounting your code inside a container using Docker Compose host volumes, but for containers running in a remote cluster.

For a more beginner friendly quickstart there is a handy tutorial hosted by the Docker Team here.

In this tutorial, you’ll learn how to deploy a Fullstack Invoice Management App called Kerosine Invoicing to Okteto Cloud by using a docker compose manifest. Quickly grab the code here

How to get started

In order to follow this tutorial, the following prerequisites must be met:

Get a local version of the Kerosine Invoicing App by executing the following commands:

The deploy command will create the necessary deployments, services, persistent volumes, and ingress rules needed to run the Kerosine Invoicing App. Go to the Okteto Cloud dashboard and you will get the URL of the application… or maybe just pick it up from your console. 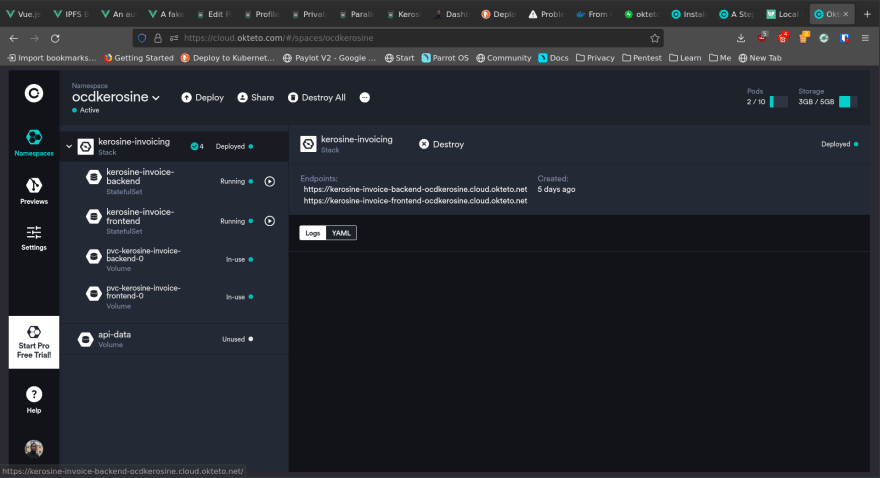 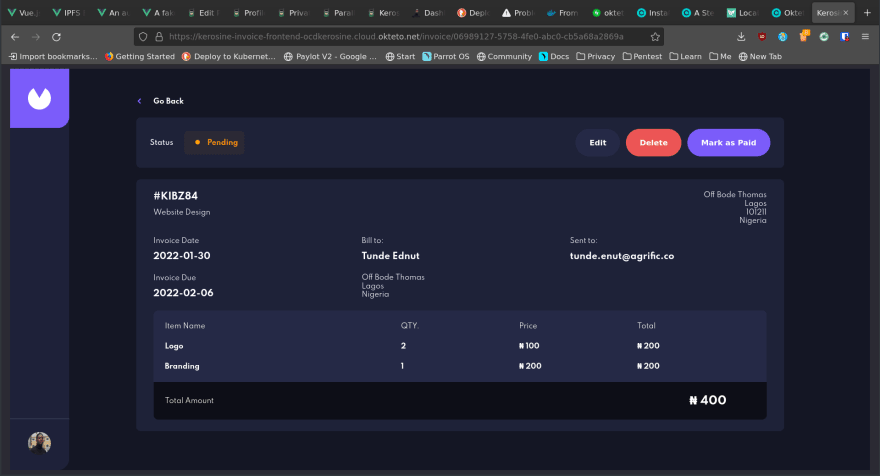 It is at this point I would like to obligatorily pull you away from the action to speak on my environment setup and tell you the inspiration behind it. I code using VS Codium(open source binary release of vscode without Microsoft telemetry) on Parrot OS, Linux. Parrot is a security and pen-testing based OS. Its popular rival is Kali Linux, the OS in which I learnt the bread and butter of hacking and Linux Administration. But why? Because trackers are using your information for purposes that don’t protect your self interest. Find out how you can protect yourself from the PrivacyTools.io site here.

We have successfully deployed our application to the Kubernetes development platform, Okteto, using docker-compose as below: 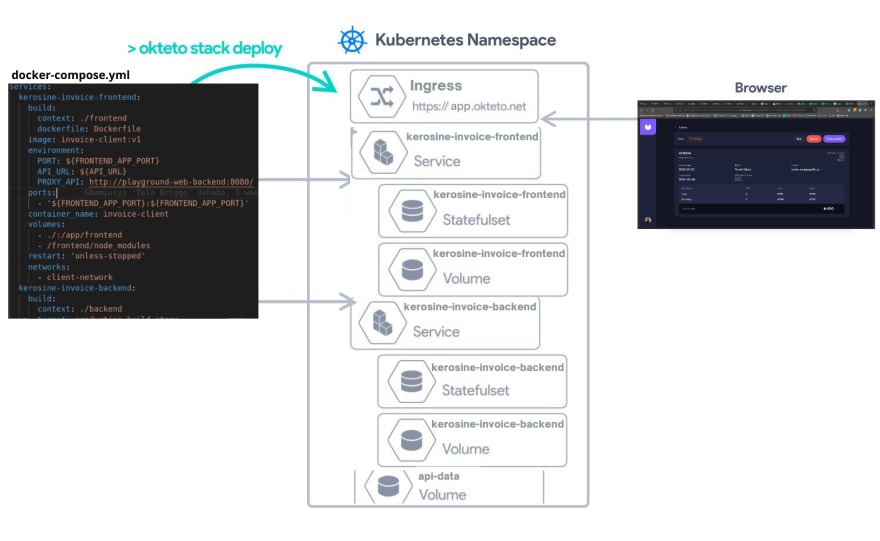 Now that the Kerosine Invoicing App is running on the cloud (production), let’s make a small change (on local pc) to show you the full development workflow.

Open the “frontend/public/index.html” file in your IDE and change the line 14. Save your changes.

Once you’re happy with your changes, execute the following command:

Check the URL of your application again. Your code changes were instantly applied. No commit, build, or push required. And from this moment, any changes done from your IDE will be immediately applied to your application all thanks to Telepresence! 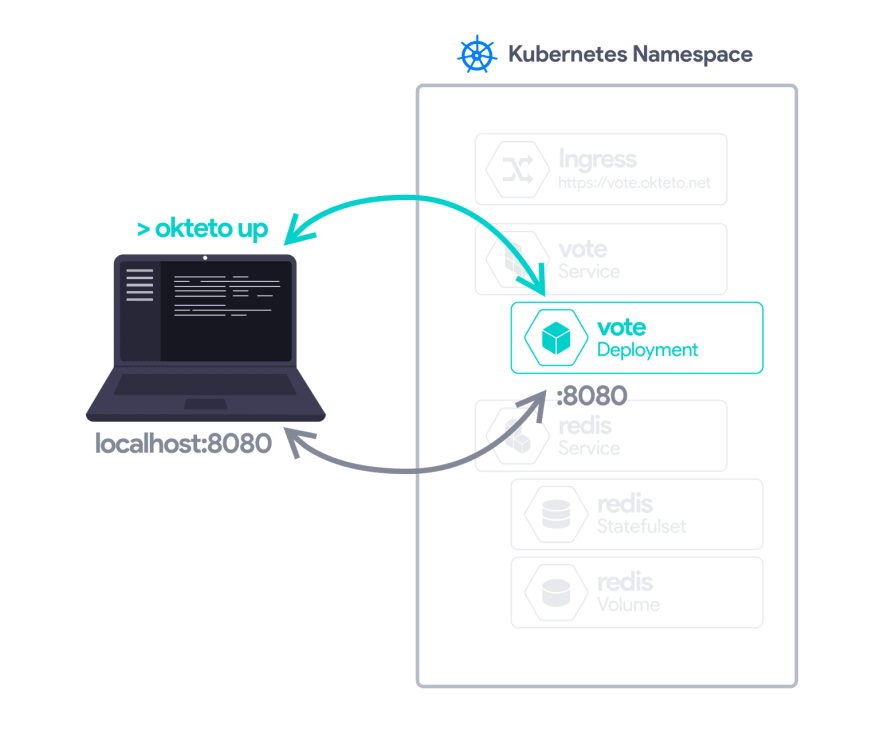 By using docker-compose with Okteto, you’re able to get all the benefits of developing with Kubernetes, such as using monitoring tools, platform services like secret management tools, and taking ownership of the release pipeline, but without the hassle of needing to learn Kubernetes.

The post Deploy to Kubernetes in 5 minutes with Docker Compose and Okteto Cloud first appeared on Kerosine Coding.

How to Create a Simple Helm Chart

Once suspended, ocdkerosine will not be able to comment or publish posts until their suspension is removed.

Once unsuspended, ocdkerosine will be able to comment and publish posts again.

Once unpublished, all posts by ocdkerosine will become hidden and only accessible to themselves.

If ocdkerosine is not suspended, they can still re-publish their posts from their dashboard.

Once unpublished, this post will become invisible to the public and only accessible to Gbeminiyi 'Telo Briggs' Oshoba.

Thanks for keeping DEV Community safe. Here is what you can do to flag ocdkerosine:

Unflagging ocdkerosine will restore default visibility to their posts.