The fourth minor version of Agrippa, the React component CLI, is finally out!

Once again, Agrippa's community has grown a lot since the release of the previous minor update, v1.3.0, back in December. Agrippa has grown by over 230 stars since the previous release - in absolute terms, that's our biggest growth yet!

Releasing a new version is always a good opportunity to express my deep gratitude to everyone using Agrippa, and especially those of you who've given your feedback, suggested features, or opened other issues on our GitHub repository. You're the best!

If you're not using Agrippa, join us! Read the Getting Started guide or visit us on GitHub.

We have some exciting new features released in v1.4.0:

Agrippa's terminal UI has been revamped! it should now be more informative, a lot cleaner, and especially much more ✨aesthetic✨. 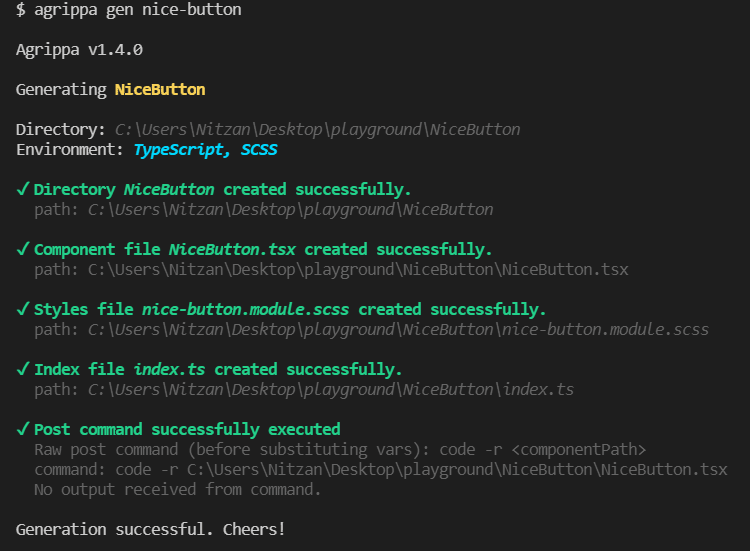 Agrippa now supports styling with styled-components! This is actually the second issue opened for Agrippa, and it's been open for quite a while now. It's truly nice to see it finally implemented. To check it out, use the value styled-components for the styling flag.

TS users can now select between interfaces and types for component props declarations.
For more info, see the docs on tsPropsDeclaration.

Two new variables, <ComponentName> and <component-name>, can now be used with post commands.
The first is the generated component's name in pascal case (e.g. NiceButton), while the second is in kebab case (e.g. nice-button).

Two packages that Agrippa has been using up to now, but hasn't really needed to, were removed, and Agrippa should now be a little lighter.


That's pretty much it! We've already begun to work on the next features for Agrippa. Our main focus in the near future is on implementing test file generation, further expanding Agrippa's flexibility to suite custom use-cases, and more.
That being said, we're always on the lookout ideas for new features and improvements, so if you have one - please share it with us!

To get started with Agrippa, read the Getting Started guide or visit us on GitHub.
Your thoughts and feedback, as always, are most welcome.
If you've found a bug with this release, or want to suggest a new feature, please submit an issue.

Once suspended, nitzanhen will not be able to comment or publish posts until their suspension is removed.

Once unsuspended, nitzanhen will be able to comment and publish posts again.

Once unpublished, all posts by nitzanhen will become hidden and only accessible to themselves.

If nitzanhen is not suspended, they can still re-publish their posts from their dashboard.

Once unpublished, this post will become invisible to the public and only accessible to Nitzan Hen.

Thanks for keeping DEV Community 👩‍💻👨‍💻 safe. Here is what you can do to flag nitzanhen:

Unflagging nitzanhen will restore default visibility to their posts.