8 weeks of concentrated effort into the Polygon Fellowship finally concluded with a banger of a week at the Polygon HackerHouse in Bangalore. ✨

This has been a defining experience in both my personal and work life, and I can't wait to tell you about it!

Being in the Beginner Track, I was first educated about common concepts in web3 for a couple of weeks while I develop or start developing my final project's idea.

Here's how the 8 weeks were structured:

I made blog posts at the end of each week, covering what I learnt in that week. They are available on my Dev.to profile.

There were many mentors to assist us, and a mentor was assigned to a group of 5-6 people each. My mentor is Leibing Guo from CovalentHQ, and he was very excited to hear about our ideas and progress!

Every week was exciting! It was filled with interesting assignments and speaker sessions and the fellows would help each other out frequently as we all learn and grow together.

The speaker sessions were from Industry Experts from various domains in web3 and some were our mentors themselves!
The knowledge they imparted to us is very valuable and it helped me down the road when I was making my final project.

All the knowledge culminated into me deciding that my value lies in the Creator Economy, but not directly. I had wanted to develop something similar to the Lens Protocol so badly and did like 30-40% of the work on a mobile app.
But then I realised at the HackerHouse that what I am doing isn't necessarily valuable. Why would I want to reinvent the wheel and compete with something that has no issues whatsoever and has a large community backing? Just because I need to make a project? Nah.

I found out that the Lens Protocol actually has a very good system of modules that I can use to implement the functionality I initially thought would be my differentiating factor.
I named the project Pollen. Pollen Social, Pollen Modules, Pollen Protocol, etc. Lens Protocol's theme is flowers and gardens. So "Pollen" would be what spreads the reach of the flower to distant lands! 😌

With this comes the potential to have custom logic. For example, before giving a user a Follow NFT, a creator could have a condition that the user should hold a certain NFT, say Bored Apes, otherwise they can't follow the creator.

The possibilities are endless! But my time and energy isn't, so I created a suite of seven modules that would be simple and standard. These would be basic modules that the people using Lens would definitely want but is not there right now. 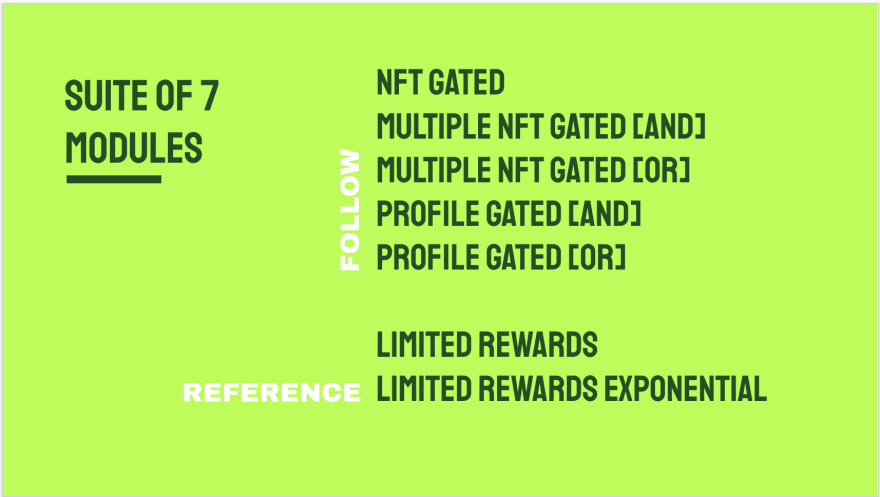 These are extension modules for logic on Follow and Reference.
Reference Modules basically have logic related to comments or reposts. In my case I enabled giving rewards on repost.

I essentially wanted to build an OpenZeppelin for Lens. Here are the hosted docs: http://pollenprotocol.surge.sh/

I also received positive feedback from the founder of Lens Protocol and Aave himself :)

Finally, the day was here! I'll say this straight-off, meeting someone offline is NOT the same as meeting them online. With all the fellows here, about 50 of them combining Beginner and Buidler Tracks, it felt like this is where I belonged XD.

I got to interact and truly know the other fellows and I feel like I have made friends for life :)

The HackerHouse was in a crazy luxurious 5-star hotel in Bangalore and we lived in suites like the Kings and Queens that we are 👑.

Every day was packed with in-person events in a beautifully decorated event hall. Prominent people like the founders and devs of Quickswap, Biconomy, etc. gave talks and this was huge for us.
Because after the events we were able to sit with them for lunch, dinner or in general and discuss various topics and also get feedback on our projects!

It's like getting life advice from the gods themselves XD 🌤

At the end of the hackerhouse, I gave my presentation. I was a bit nervous but when you go up to the stage and you know what you're doing, everything just flows effortlessly! 🎉
I forgot to mention, I was also loaded with Shwags from the Devfolio and Polygon organizing teams. It's like we were getting goodies EVERY DAY! YAY!

There was a grand After-Party planned by Devfolio where we had a blast and met some more people from the web3 space as it was open to VCs, builders and the like.

It was an unforgettable experience. The connections I made and the project itself got me ahead in ways I couldn't have imagined before. I was a fan of Polygon before but now I can't stop buidling 🔥🔥🔥!

Special thanks to the Devfolio team because I saw first-hand how hard they worked to keep the experience smooth for us fellows, so kudos to them!

Not a day shall pass when I don't miss the HackerHouse and the people there, but life goes on. And my life has been made significantly better by Devfolio x Polygon :')

Once suspended, neelansh15 will not be able to comment or publish posts until their suspension is removed.

Once unsuspended, neelansh15 will be able to comment and publish posts again.

Once unpublished, all posts by neelansh15 will become hidden and only accessible to themselves.

If neelansh15 is not suspended, they can still re-publish their posts from their dashboard.

Once unpublished, this post will become invisible to the public and only accessible to Neelansh Mathur.

Thanks for keeping DEV Community 👩‍💻👨‍💻 safe. Here is what you can do to flag neelansh15:

Unflagging neelansh15 will restore default visibility to their posts.