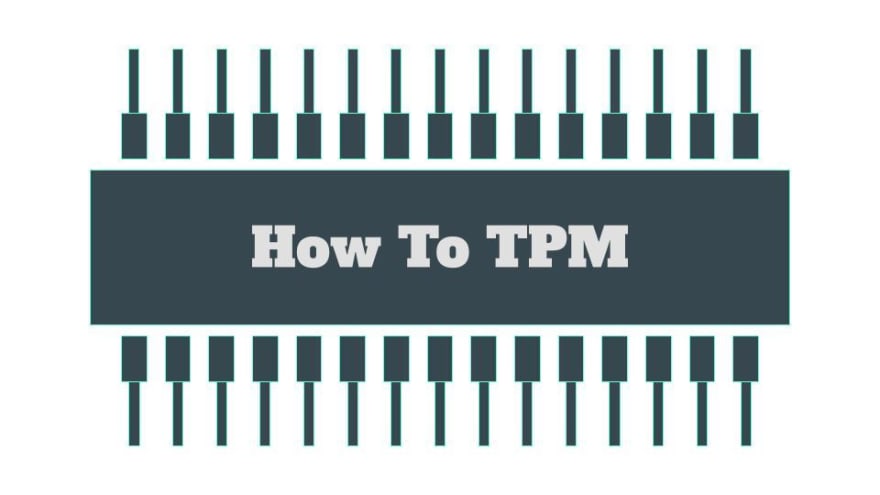 As part of a recent piece of work, we did a spike on TPM. During the process, I realised that there wasn't material available for beginners out there, at least not in a single place. A lot of the documentation around it is cryptic (pun unintentional!). The idea is to make it easier to understand for TPM novices like me. I plan on documenting this in parts, so that both the reading and writing are not overwhelming. Also, this series will not delve into the technical implementation of the specification and is my basic understanding of TPM and how one can use the TPM.

What is a TPM?

TPM stands for Trusted Platform Module. TPM is a cryptographic co-processor. What this means is that it the TPM in addition to other things, contains a processor that is specialised for cryptographic use-cases. It is a hardware chip that is attached to the motherboard of a computer. The TPM is an inbuilt security module.
Over time, there have been multiple versions of TPM

In this post I shall be talking only about TPM 2, unless I want to delve into some historical context or differences between the multiple versions.

What can a TPM do?

The use-cases I have explored so far, TPM can be used to

It can likely be used for a whole bunch of other use-cases as well. I haven't explored other things at this point.
Now, moving on to TPM specific vocabulary.

You can think of a hierarchy as a tree structure with the parent key at the root. This wraps around and encrypts all of its children keys. Keys can be created under any of the following 4 hierarchies.

Of the above, Endorsement, Owner and Platform hierarchies are persistent hierarchies. And the Null hierarchy is an ephemeral hierarchy. What this means is that, keys created using either of Endorsement/Owner/Platform hierarchies can survive system re-boots. Keys created using Null hierarchy on the other hand are ephemeral i.e., will not be persisted between system reboots. All TPM objects (keys/data) belong to a hierarchy.
The cryptographic root of each hierarchy is a seed. A seed is a large random number that the TPM generates. This seed is never exposed outside the TPM's secure boundary. This seed is the starting value from which keys are generated. It is also possible to further add security to the keys by adding password to the keys. Usage of the keys would now require the key password also.

Although the TPM comes with a limited amount of Non-Volatile(NV) memory, it is possible to generate more than just a few keys. This is owing to the fact that one can recreate the same keys by applying a cryptographic algorithm on a given seed. It is deterministic. Thus the keys need not be saved in the file system(TPM allows for saving the keys in file system); it is always possible to regenerate them.

A handle is a 32-bit reference to an entity in the TPM. An identifier that uniquely identifies a TPM resource that occupies TPM memory.
There are 3 types of key handles.

Transient handles are addresses of keys in the NVRAM. These point to keys that have either been loaded using tpm2_load or keys that have been (re)created but not persisted.

Persistent handles reference keys in the NV memory of the TPM. These keys are persisted through power cycles and hence need not be recreated. To use the keys, they first need to loaded into the TPM. However, with the persistent keys, one need not load as these are resident in the TPM itself. If the key (re)creation time is longer, they are persisted using tpm2_evictcontrol. Otherwise, they can be recreated upon requirement.
Permanent handles reference entities that can't be deleted. Among other things, this also includes handles to the 4 hierarchies.
In addition there are other types of handles for NV indices, saved session, PCR, etc.

Some of the commonly used attributes are:

By using a combination of these attributes, one can create primary keys, keys for signing, parent keys, etc.

In the next parts, I shall cover the various TPM components, accessing the TPM, getting hands-on with creating keys and signing.