Kotlin has been a pretty steadily growing programming language over the last few years and yet I have never gotten a chance to use the language. Most of the work I do is in c# which doesn’t seem to be that different from Kotlin so I’m interested to see how long it will take me to get familiar with the language. I figured I would document how I go about getting started!

For those following along, there is official documentation that seems to be fairly straightforward. Maybe the IntelliJ IDEA is amazing, but I honestly hate having to download a full IDE just to try out a language. So instead of following that, I’m going to be using Visual studio code!

To get started, you are going to need to install the compiler. To do this, go ahead and run the following commands via the command line via Homebrew:

In order to support programming languages in VS Code, you are going to need to install an extension from the Visual Studio Marketplace. The extension that we need to download is called “Kotlin Language” by Mathias Fröhlich. See this screenshot below:

If you don’t already, Code Runner is another extension that you will need to have in order to execute Kotlin code in VS Code. Using the same process as before, look for “Code Runner” in the extension store. This extension is really useful for being able to execute a bunch of different code source.

Once you have everything downloaded, create a new file called “hello.kt” and add the following lines:

Upon saving the file, right click and select: “Run Code”

After compiling, you should see an output window appear. Here’s what mine looked like! 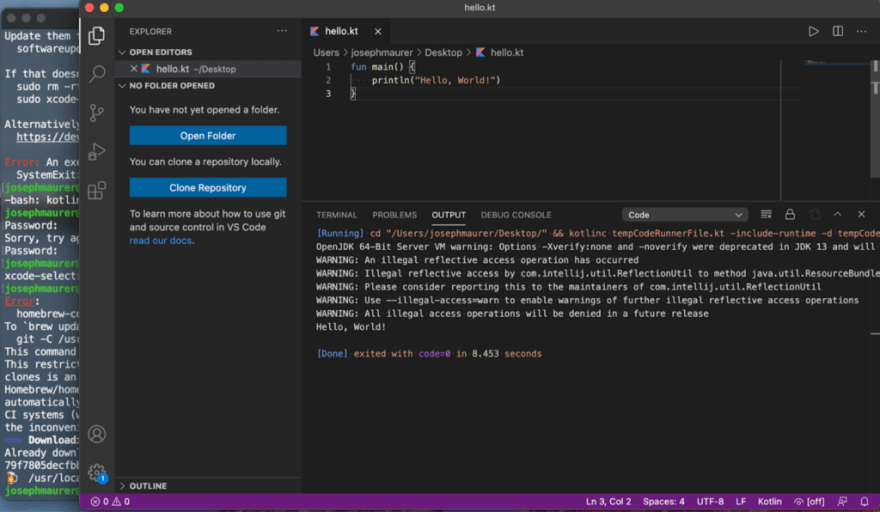 Congratulations, you’ve just run your first Kotlin code! Next post, we’ll get into the fun stuff but for now, we have everything ready to go 😎

Kotlin was created and is driven and maintained by JetBrains, therefore JetBrains IntelliJ will obviously have the best Kotlin support. Its the same plate.

Unfortunately this brings a conflict-of-interest. Why would other editors implement plugins for Kotlin?

Looking at the github stars of the Visual Studio Code plugin for kotlin language support: github.com/mathiasfrohlich/vscode-...
you see only 164 stars, updated in Feb 2020.
Definitively seems a bit dead.

If JetBrains would take care of creating a production ready VisualStudioCode plugin to support for Kotlin, which they won't as they want to promote their own paid IDE, then there would not be conflict of interest.

It seems to me a bit of vendor lock-in.

That being said, I would avoid Kotlin altogether till there is no conflict of interest and as long as i'm not bound to a JVM stack.

Agreed. I have taken the same stance for Swift, as Apple will never port their SDKs to be available outside of MacOS. A real shame too because I love both Kotlin and Swift, but because, even though they are open source languages, they are mostly bound to their original platforms, I'm not gonna waste my time trying to switching between tools.... maybe Dart and Flutter will finally break such old ways.

Yeah I don't expect JetBrains to provide the tools, but I do think the open source community can fill that gap.

A simple explanation of useEffect