I began working toward my goal of becoming a software developer since 2016. I've blogged about it off and on when I find the time and inspiration. My most popular effort has been my first, When Going it Alone Quit Working(Or How I Learned to Love Programming) and a year and a half after writing that post I'm happy to be able to say a few things:

One, that I've been a working software developer for almost a year.

Two, in addition to my day job, where I write mostly Python web scraping code, I've been able to teach myself full stack web development using React, Node.js, and NoSQL databases like MongoDB and Neo4j.

Three, I'm ready to take all of this to the next level and build something that quite honestly, I'm not sure I'm ready to and it looks like this.

Now you may be looking at this, scratching your head, and wondering what exactly it all is. To make a long story short, it's a graph of relationships that exist between land and mineral owners and the oil companies that lease their land to drill oil and gas wells. Here's a subset picture of those relationships. The problems involved in tracking these relationships are myriad but I think I know how. 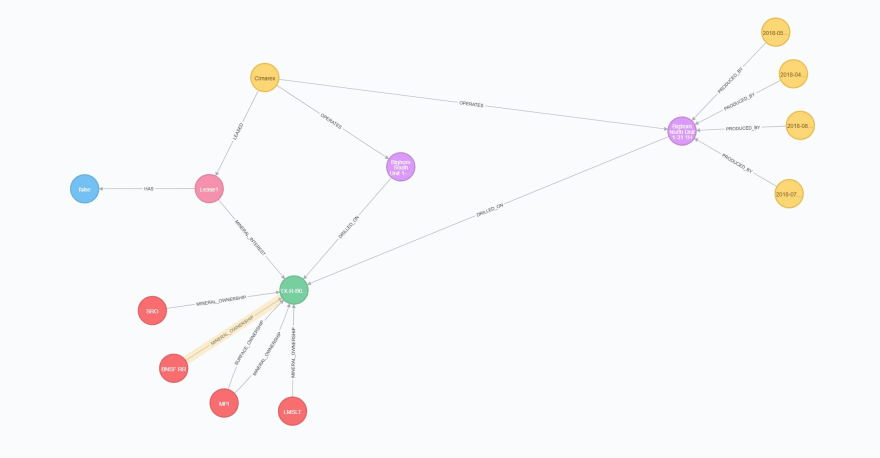 In case you haven't read anything I've written before, just know that I live in the middle of a massive oil boom in West Texas. While I've been successful in getting myself out of my muddy boots and into an office writing code, I've been unsuccessful in getting myself to a different geographical location (which is changing soon) and so many of the jobs that I find to do are still oil related. It's simply where the money is here. I do side work for a family-owned company automating some of the more arduous tasks and out of that work I've identified a problem that I think I can solve for them with the skills that I've learned.

The past year has been an amazing learning journey. I've entered into a mentorship program to learn JavaScript and it's best practices. I got a Udacity Nanodegree from their React/Redux program and whenever I get the chance I've been taking every tutorial I can get my hands on to learn GraphQL and how to build databases, my favorite being the NOSQL offering Neo4j. I've worked to round myself out and be a true full stack developer. I've reached the tipping point where I feel like I can take all of these skills and create something real. I hope to detail the problem I'm trying to solve, the technologies I've chosen and why in this series.