Despite recent discussions in the PHP community about whether type hints are to be considered 'visual debt' or not, at Moxio we still strongly value adding types to our code. Writing type-safe code lets us catch bugs early, enables static analysis, and serves a self-documenting purpose. Still it can be a challenge to write type-safe code in PHP, especially as it lacks a feature known as 'generics'. In this blog post I will show how (lack of) generics influences type-safe design, how parameter types and return types may change when extending a class or interface, and how we can keep our package design sound while doing so.

Suppose we have an interface that represents a file, from which we can get the raw contents. Instances of this interface are created by a file reader, which accepts a filepath and returns an object corresponding to that file on disk:

These interfaces (and their implementations) may be part of our own code, or they could be defined by some vendor package. Either way, we would like to extend File with some functionality specific for PHP files, like retrieving its PHP Abstract Syntax Tree (AST):

Now how does this relate to our FileReader interface? What should the interface for a class that reads and returns PHP files look like? Can we use such a PHP file reader in places where a FileReader is expected?

Languages that have generics, like Java, allow an elegant solution to this problem. We can just parameterize the FileReader interface with the type of file returned:

Now a reader that returns instances of PhpFile implements FileReader<PhpFile>, while readers that (are only guaranteed to) return more generic File objects are a FileReader<File>. If some code needs just any (generic) file reader it can just declare it as FileReader<? extends File>. It can then accept both FileReader<File> and FileReader<PhpFile> (or any other reader that returns a subtype of File), having the guarantee that the objects returned from it are always a File and thus at least have a getContents() method.

In languages without generics, like PHP, this is a bit more difficult. We could of course just create a separate interface for a PHP file reader:

However, can we declare such an interface as an extension of FileReader, and thus pass it wherever a FileReader is required, despite the signature of readFile not being exactly equal? In (type) theory, the answer would be 'yes'. After all, a FileReader is something obeying the contract that we can call readFile() on with a filename to receive a File, in which a File is an object guaranteed to have a getContents() method returning a string. Our PhpFileReader::readFile() method returns a PhpFile, which is (a particular specialization of) a File. This makes a PhpFileReader obey the contract of a FileReader.

This type-theoretical principle is called covariance: when extending a type (class or interface), we are allowed to 'tighten' the types of the values returned by each method (to a more specific subtype) without breaking its contract. Consumers calling such a method when they expect to deal with the parent type will still get an object of the type they desire, having all the methods they expect to find on that object. Subtypes may thus be stricter in what they return than their parent types. 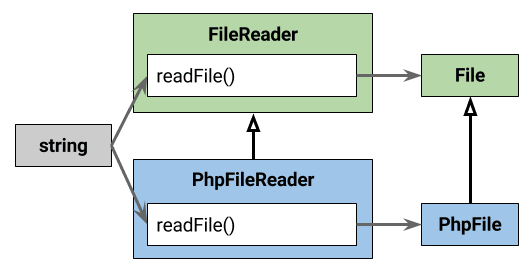 Does this mean we can just write interface PhpFileReader extends FileReader? The practical answer is, unfortunately, 'no'. PHP only supports covariance when extending or implementing classes or interfaces in the specific situation where the parent type has no return type hint on the method and the subtype adds one. We can view this as tightening the return type from literally anything to a specific type. In all other situations, it requires any return type hints to be identical between the parent and the child. This does not allow us to use our PhpFileReader where a FileReader is required without removing type hints, making our code less type-safe. I will show a solution to this problem in a while. First, let's look at how subtypes affect the input parameters of methods.

Suppose that in our system we also have rules operating on files, e.g. for checking coding standards or detecting bugs. We could model such a rule on a generic file using a type-safe interface like this:

Rules implementing this interface can retrieve the contents of the file they receive using getContents(), and then for example check for "@todo" markers or trailing whitespace. But what if we want to write rules that are specific to PHP files, using the more powerful information available inside the AST?

In languages with generics we have an easy solution: we parameterize the interface again, this time by the type of the file argument we intend to check:

A rule that operates on PHP files then implements FileRule<PhpFile>, can only be called with instances of PhpFile and has access to the getAst() method on the file object. A rule that checks any type of file can implement FileRule<File> and will accept any File instance, but will not know about methods like getAst(), which are specific to the PhpFile subtype.

In PHP we cannot resort to the solution we would have used in a language that does support generics. Also for this situation we can create a separate interface:

Again we can ask what the relationship between FileRule and PhpFileRule is. Is PhpFileRule an extension (subtype) of FileRule? We can see fairly easily that it isn't. After all, a FileRule is something that can check any File object, while PhpFileRule will not accept (for example) a PythonFile. This violates the Liskov Substitution Principle and establishes that PhpFileRule is not a proper subtype of FileRule.

What most people find confusing and suprising is that the (type-theoretical) relationship between FileRule and PhpFileRule is actually the other way around: FileRule is a subtype of PhpFileRule! It makes sense though, given that FileRule will accept anything that a PhpFileRule accepts as a parameter (i.e. all instances of PhpFile, which are all a File by inheritance). This type-theoretical principle is called contravariance: when extending a type we are allowed to loosen the types of all input parameters of methods in the subtype. Subtypes thus may be more liberal in what they accept than their parent types. 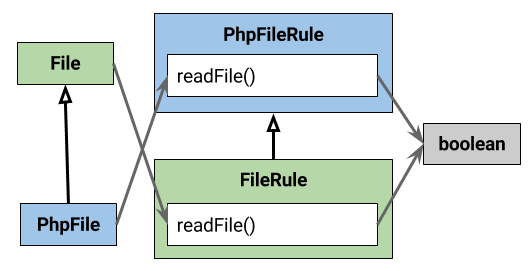 Does that mean that in practice we could (and should) write interface FileRule extends PhpFileRule in PHP? The answer is (two times) 'no'. First, PHP does not support contravariance of method parameters when extending or implementing a class or interface. This means that, for now, the type hints on method parameters need to be identical between parent type and subtype. An RFC which will allow one specific type of contravariance (completely dropping the type constraint from a parameter, allowing any input value) has been accepted for PHP 7.2. This RFC is mainly intended for library authors to start adding scalar type hints to interfaces without breaking subclasses. Full covariance and contravariance support in PHP is not expected in the short term, as their implementation requires changes to autoloading.

Still, even if PHP supported it, it would not be a good idea to declare that FileRule extends PhpFileRule. This has to do with the principles of package design as described by Robert "Uncle Bob" Martin. If we think of the functionality and interfaces for generic files as being in one package and the ones for PHP files belonging to another, the 'php files' package has a dependency on the 'generic files' package, as PhpFile extends File. If we would let FileRule extend PhpFileRule we would also introduce a dependency the other way around, creating a package dependency cycle and thus violating the Acyclic Dependencies Principle. 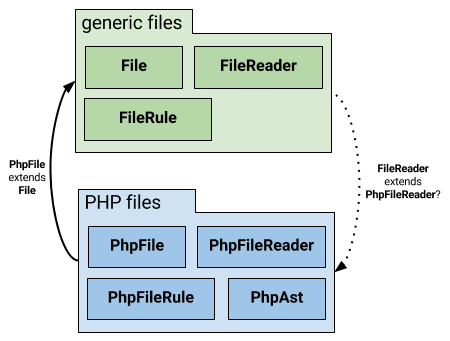 The Stable Dependencies Principle ("Depend in the direction of stability") and the Stable Abstractions Principle ("Abstractness increases with stability") point us in the 'correct' direction of dependence. Since the 'generic files' package is more abstract than the 'php files' package (and thus more stable), 'php files' can depend on 'generic files'. Dependencies the other way around should be avoided. We can even imagine that the 'generic files' package is a third party library that we use. We are in no position to ask that library's author to make his FileRule interface extend our PhpFileRule interface.

Adapter pattern to the rescue!

If we now want to use a FileRule where a PhpFileRule is asked for we can just pass new FileRuleAsPhpFileRule($file_rule). Similarly we can use new PhpFileReaderAsFileReader($php_file_reader) to have a reader for PHP files act as a generic file reader. This allows us to adapt between our related interfaces in a type-safe way and, since the adapters are both part of the 'php files' package, prevents dependency cycles. 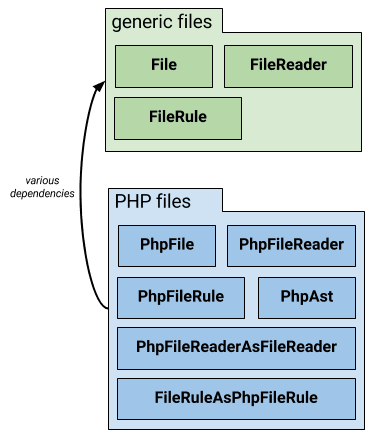 Of course there is a small downside to this approach. Using this pattern requires two additional adapter classes and two PHP-file-specific interfaces to be written (when compared to the implementation with generics) and the delegation calls inside the adapters incur a very small runtime overhead. We consider these disadvantages negligible however when compared to the benefits of type safety and proper package dependencies.

This post was originally published on the Moxio blog.

Add a CLI interpreter for PHPStorm in MontereyOS

How to make a word count tool with vanilla JavaScript

Moxio
How to load an SQLite extension in PDO?
#php #sqlite #pdo #ffi
What Open Source libraries would you like to have?
#discuss #opensource #php #javascript
Mutation testing in PHP
#php #testing #codequality #learning

Once suspended, moxio will not be able to comment or publish posts until their suspension is removed.

Once unsuspended, moxio will be able to comment and publish posts again.

Once unpublished, all posts by moxio will become hidden and only accessible to themselves.

If moxio is not suspended, they can still re-publish their posts from their dashboard.